Tesla is allegedly sold out through the end of Q3 and has been steadily RAISING prices the last few months. I went from zero referrals to 5 in a few months, so it looks to be true from my perspective. Plus, I see a Model Y on almost every corner in NY and VT.

Wonder what this will look like at the end of the year: 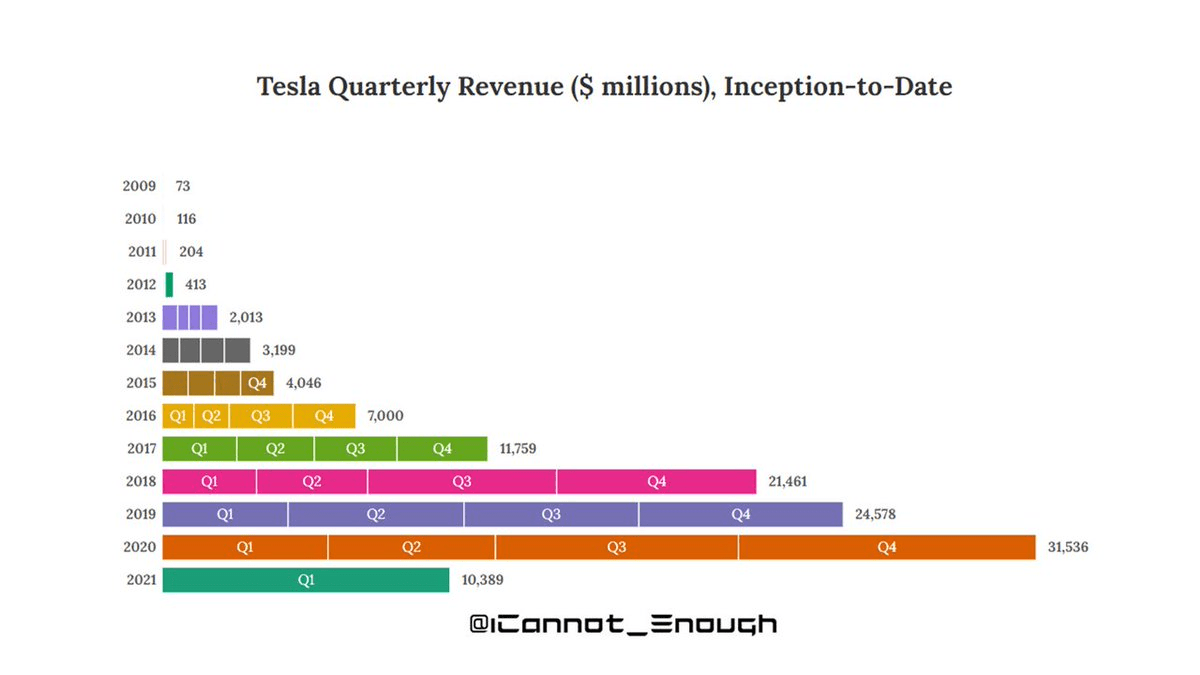 Automakers are indeed raising prices in 2021, because all of them are facing far higher costs for inputs: Steel, rubber, textiles, plastics, semiconductors, labor, etc.  There is an unprecedented surge in inflation.  So yes, Tesla will not be an exception to this price-increase wave.

As for being sold out, if you have visited car dealers lately, you will see that the lots are almost empty.  Dealers that would normally have 250 cars in stock now have 25.  Or zero. If they have a few, a Toyota RAV4 could have a $20,000 markup.  That’s over 50%.  This is all about supply and demand.

I regularly pass by a harbor area where the automakers offload their imports onto giant parking lots, from where the cars are trucked to the dealerships.  Over the last 3 months, I am eyeballing the incoming volume of vehicles down close to 80%.  The situation reminds me of standing in line at a bread line in Moscow in September 1990.  You basically have to bribe some guy somewhere in the food chain in order to get a loaf.

Try ordering a pickup truck from GM, Ford or RAM today.  You used to be able to get on the lot for 15% or more under sticker price.  Now there is nothing in stock and the wait to order one is 4-6 months -- if everything works out perfectly, which is doubtful at this point -- with few dealers usually charging 15% above sticker if you can get them to return a phone call or want to talk to you in any format at all.  Vehicles that are 1-2 years old can sell for a few percent over their new price from a year or two ago.

In that context, of all automakers seemingly being sold out of everything, and with long Soviet-Union style lead-times for delivery, it does not surprise me that as a last resort some non-zero number of consumers will break down and order a Tesla too.

Look at the cars that are selling above MSRP: https://www.autospies.com/news/index.aspx?submissionid=106070

President Biden has a two-step strategy to cut tailpipe emissions, the nation’s largest source of greenhouse gases: First, restore the standards to roughly the level set by President Barack Obama. Then, tighten them even further, with an aim of making the electric car the dominant vehicle sold in the United States.

The Biden administration plans this month to propose a tailpipe emissions rule that would largely mimic the Obama standards, which were jettisoned in 2019 by President Donald J. Trump.

At the same time, according to four people familiar with the plan, the administration is starting to write more stringent auto pollution rules that could cut emissions more deeply and force carmakers to increase sales of electric vehicles but could also face political pushback and disrupt the auto industry.

Mr. Biden has set the most ambitious climate agenda of any American president, pledging to cut the pollution that is driving global warming by 50 percent from 2005 levels by 2030. That goal would require a radical transformation of the nation’s economy away from fossil fuels, including a rapid shift by American drivers from internal combustion engines of the last century to zero-emissions electric vehicles.

“Look, the future of the auto industry is electric. There’s no turning back,” Mr. Biden said at a Ford plant in Michigan in May, at the unveiling of the company’s new all-electric pickup truck. “We’re going to set a new pace for electric vehicles. That means reversing the previous administration’s shortsighted rollback of vehicle emissions and efficiency standards. Setting strong, clear targets where we need to go.”

What Is A Flying Car?

3) Another NYT article: What Is a Flying Car? I talked to a Silicon Valley engineer who’s very familiar with this sector a few months ago and he said we’re a LONG way – at least 5-10 years – from any commercially viable flying taxi – mainly because the weight-to-power ratio of batteries isn’t sufficient. Thus, he’s highly skeptical of the three air taxi companies going public: Joby, Archer and Lilium. Excerpt:

BlackFly is what is often called a flying car. Engineers and entrepreneurs like Mr. Leng have spent more than a decade nurturing this new breed of aircraft, electric vehicles that can take off and land without a runway.

They believe these vehicles will be cheaper and safer than helicopters, providing practically anyone with the means of speeding above crowded streets.

“Our dream is to free the world from traffic,” said Sebastian Thrun, another engineer at the heart of this movement.

That dream, most experts agree, is a long way from reality. But the idea is gathering steam. Dozens of companies are now building these aircraft, and three recently agreed to go public in deals that value them as high as $6 billion. For years, people like Mr. Leng and Mr. Thrun have kept their prototypes hidden from the rest of the world — few people have seen them, much less flown in them — but they are now beginning to lift the curtain.

… The rise of the flying car mirrors that of self-driving vehicles in ways both good and bad, from the enormous ambition to the multi-billion-dollar investments to the cutthroat corporate competition, including a high-profile lawsuit alleging intellectual property theft. It also recreates the enormous hype.

It is a risky comparison. Google and other self-driving companies did not deliver on the grand promise that robo-taxis would be zipping around our cities by now, dramatically reshaping the economy.

But that has not stopped investors and transportation companies from dumping billions more into flying cars. It has not stopped cities from striking deals they believe will create vast networks of air taxis. And it has not stopped technologists from forging full steam ahead with their plans to turn sci-fi into reality.