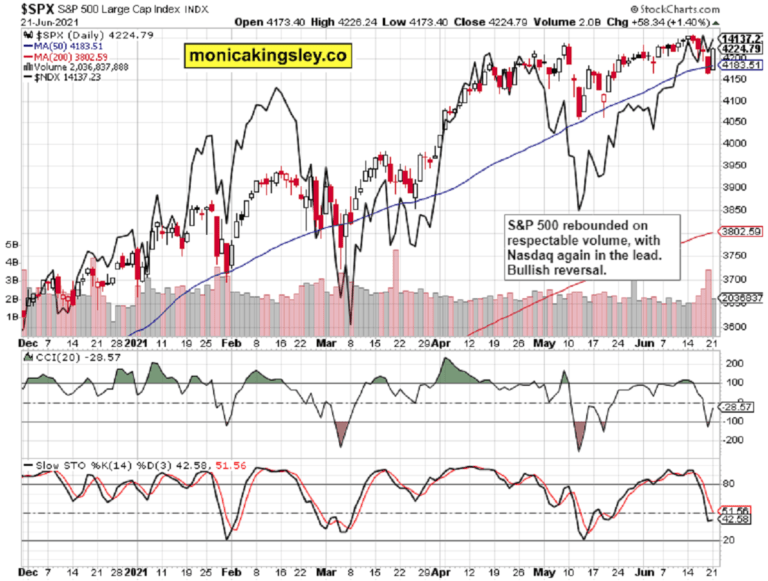 S&P 500 risk-on trading yesterday confirmed that it would have indeed been too early to write off value stocks. Financials, energy sprang higher, accompanied by the as of late usual tech suspect – the heavyweights though merely defended gained ground. Coupled with the credit market perspectives, it was a clear risk-on day as evidenced by the VIX and put/call ratio. The markets have turned on a dime, ignoring the Fed messaging of prior week as shown in the surging CRB index, reversing dollar and Treasuries:

(…) Given the ease with which precious metals and then select commodities such as copper or soybeans tumbled, rate hikes might appear to be baked in the cake now – but in reality, it‘s the unyielding inflation that would prove rather persistent than transitory.

The Fed did the bare minimum, acknowledging inflation in passing, implying it would go away on its own. But it‘s more complicated than that – bank credit creation isn‘t strong, and had been declining before bond yields bottomed in Aug 2020. Are banks reluctant to lend, or customers to borrow? The result of production not ramping up as wildly as expected (reopening trades) is compounding the disturbed supply chains and commodity prices rising (cost-push inflation). Add to that job market pressures, and you have a recipe for inflation being more transitory than originally thought. In other words, cyclical and structural as import-export prices hint at too.

Money in the system isn‘t flowing into production or capacities expansion – inventories have instead been drawn down, and need to be replenished. Just as I have written the prior Monday, that would be putting upside pressure on prices as much Europe awakening or hard hit countries such as India springing back. So, fresh money results in excess liquidity, trapped in the system, and flowing to bonds, which explains the Fed‘s need to act and fix repo rate at 0.05%. So much for the recent spike in Treassuries – this whiff of „almost deflation“ has it wrong, and yields will revert to rising – regardless of when exactly (or if) other parts of the intended $6T stimulus package get enacted.

Sure, the Fed actions have shortened the (sideways) lull in Treasuries, made the dollar spike, but haven‘t changed the underlying dynamic of the free market not willing to pick up the slack in credit creation should the Fed indeed taper. Chances are, they would still taper, but later in 2022 – such was and still is my expectation, with bank credit creation being (hopefully) the key variable on their watch as a deciding factor. In the meantime, the inflation problem will get even more embedded – not a fast galloping inflation or hyperinflation, but a serious problem raising its ugly head increasingly more through the years to come.

In short, the Fed played the dot plot perceptions game which amounts to no serious attempt to nip inflation in the bud. The markets (precious metals, commodities) got thrown off prior trends, but will see through the bluff that can‘t be followed by actions. The inflation trades (and by extension modest rise in yields as we drift towards 2.50% on the 10-year before that tapering actually starts, with positive consequences for financials and cyclicals) haven‘t been killed off, and will reassert themselves when the markets test the Fed (and they will). To be clear, I am calling for persistently elevated (not hyper) inflation (PCE deflator readings coming soon) with the 10-year yield reverting to its more usual trading range – so essential to financial repression reducing the real value of all obligations.

For now, the dollar is supported by all the tightening messaging, and as extended as it had been on a daily basis after Friday‘s close, yesterday‘s reversal had a strong consolidation feel to it, meaning that the dollar upswing might not be over just yet. The same thing can‘t be said about Treasuries, which look set to go on an overall slowly but surely rising yield path. Additionally, more calm on the risk-off (tightening) front means less panicked safe haven flows that leave out gold and silver, whose moves are sensitive to inflation and inflation expectations (among much else).

The PCE deflator would surely come below the CPI reading – by default thanks to „weighted substitution“ effects. But the fact of current inflation not meaningfully decelerating remains sticking out as a sore thumb – the Fed is playing games and jawboning inflation expectations, which thanks to the real economy including job market constrainst described above, would prove of temporary effect, springing higher as a temporarily submerged water polo ball.

For gold and silver, this means a patience game where the factors remain still arrayed behind their rise. Remember, the Fed can‘t tighten as fast as it projects to – seriously raising tapering looks slated for Jackson Hole, with actual execution coming next year. Provided that bank credit creation springs back to life, this needn‘t be a problem for stocks. Rate hikes though are a different cup of tea – any thought of normalizing yields is misplaced as Greenspan, Bernanke, and Powell were able to hike Fed funds rate to lesser and lesser levels, which means that with my anticipated, persistent inflation for years to come, even the projected (market-based, for it would be the markets who raise rates, not the Fed) return to e.g. 2.5 – 3.0% range on the 10-year, would guarantee real rates conducive to the precious metals bull run.

Crude oil, given the extent its prices are set outside of the U.S. control (no longer a swing producer, rig count having troubles reaching pre-corona levels given the current policies), is better positioned than the metals, where we have to wait before these "get it". Reopening, reflation and uptick in economic activity will work to lift black gold, and energy stocks agree. In spite of short-term technical non-confirmations, the picture remains bullish, and a deep plunge in oil unlikely.

Cryptos don‘t offer a happy sight for the bulls as the key 30,000 support in Bitcoin looks likely to be tested soon. Yesterday‘s move also in Ethereum reveals newfound bearish vigor. Not that the news out of China would be helpful here. 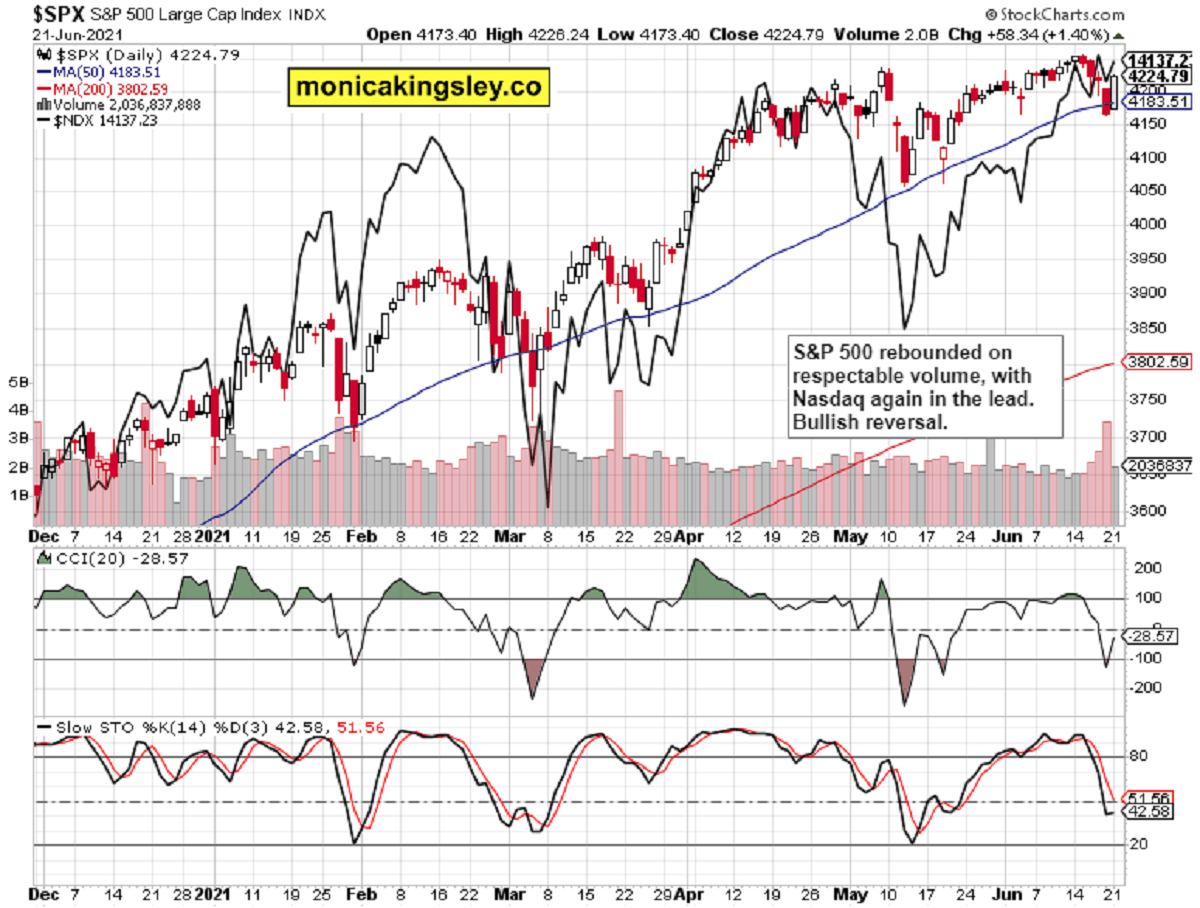 S&P 500 daily downswing looks successfully reversed – just as the Friday‘s intraday attempt to close the HYG gap hinted at. With tech leadership intact, good days for Nasdaq are a mainstay.

Holding on to the gained ground in high yield corporate bonds while TLT doesn‘t run wild again, would be the best scenario for further stock gains.

Both technology and value did great yesterday, and it‘s been the cyclicals, high beta pockets driving the S&P 500 upswing. Even the Russell 2000 decisively joined, but don‘t look for much of outperformance in smallcaps (still an understatement).

Gold and miners are still trading in corrective depths, with not nearly enough convincing upswing attempt yet. Still, precious metals are well positioned to benefit from the Fed inability to move as much as it gives impression it would.

Once silver gets whiff of both the Fed‘s predicament and current (plus expected) inflation not yielding much ground, it would lead gold higher again. It‘s a process though and we haven‘t even started it yet (today‘s Powell testimony would be insightful). 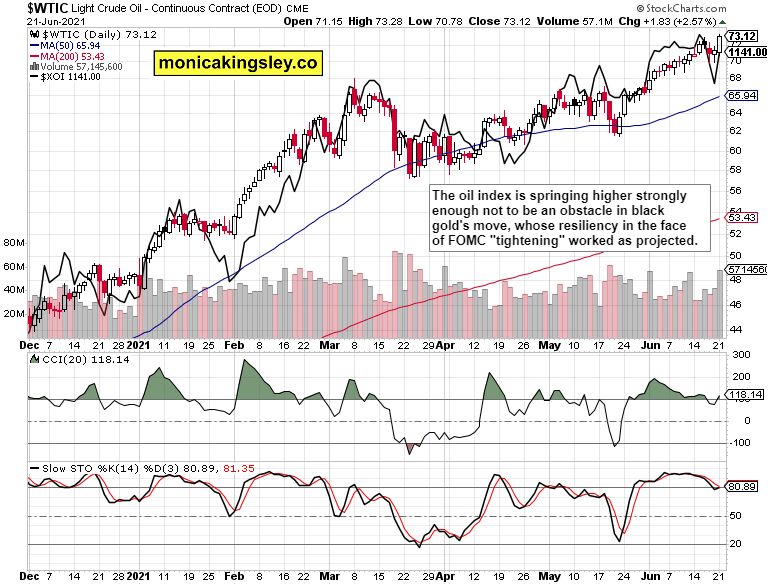 Gold and silver aren‘t out of the woods just yet but I‘m lookign for tentative return of confidence – a marathon rather than sprint.

Bitcoin and Ethereum are approaching decision time, where the floor could fall out pretty fast if the bears aren‘t stopped at 30,000 in BTC. The weekly basing pattern is intact for now, but prices returning good 5,000 higher would help also the ETH bulls with an even chance in this prolonged consolidation – to be resolved with a steep move either way, the risks of which being to the downside, are highly pronounced.