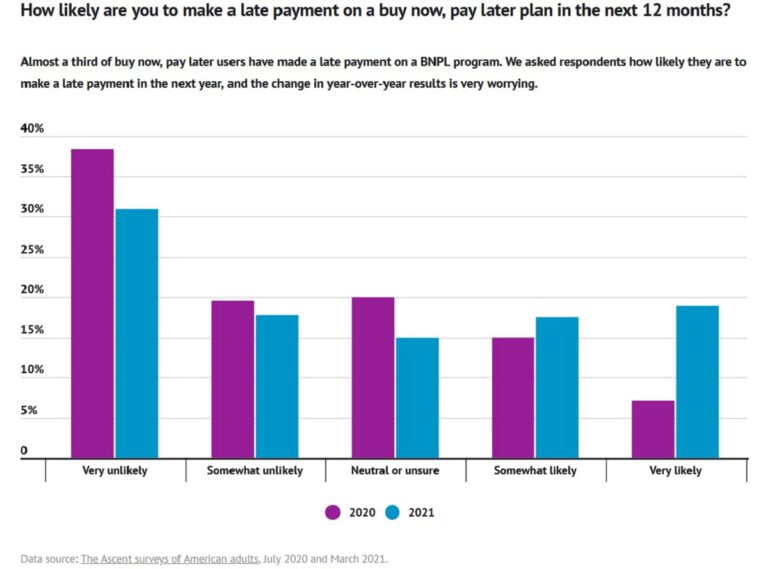 The Ascent recently updated their buy now, pay later research which revealed BNPL’s recent growth as well as the associated downfalls among its users, especially those in younger generations.

The Ascent, a Motley Fool service, conducted a survey of 2,000 Americans in July 2020 and issued updated survey results in March 2021 which revealed the following:

Nearly a third (31%) of BNPL users have made a late payment or incurred late fees, up 41% since last year. Consumers aged 18 to 24 are the most likely to make a late payment, with 47% being late and/or incurring a late fee.

In 2021, more than one-third (36%) of BNPL users say they are at least somewhat likely to make a late payment within the next year -- up 65% from last year. Gen Z respondents are the most likely to miss a payment with 44% saying they are "somewhat" or "very" likely to do this in the next 12 months.

More than 1 in 4 BNPL users don't consider BNPL to be a form of debt.

28% of all BNPL users don’t consider buy now, pay later to be a form of debt. That percentage increases to 40% when asking Gen Z respondents.

The full comparison of BNPL data from 2020 to 2021, along with additional insights into why consumers use BNPL, and the companies charging the highest interest rates/late fees can be found at https://www.fool.com/.