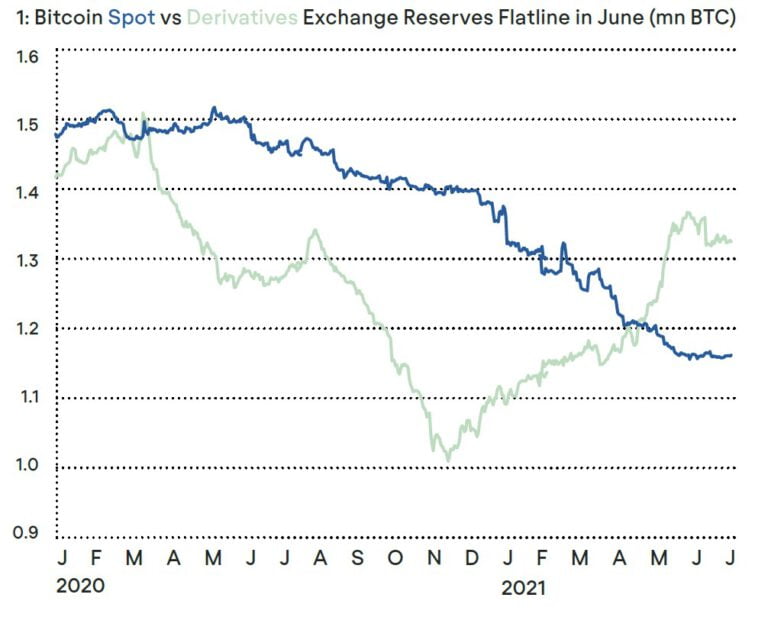 Market Data Cues Trend Back Into Optimism? by Fadi Aboualfa, Head of Research at Copper.co

Bitcoin reserves on both spot and derivative exchanges hit a peak at the start of June for this year. This however has been slowly reverting. While reserves still remain higher than the start of the year, spot markets have been heading in a distinctively downward trajectory. The number of Bitcoin held on exchanges has flatlined since mid-June heading into Q3, 2021. Ethereum, on the other hand, has seen over 1mn coins scooped off from exchanges since the end of May. While it might be early to say confidently, there is the potential for fundamentals to break correlations of a market that has remained lumped together. Copper looks at various metrics that show small signs of reprieve. 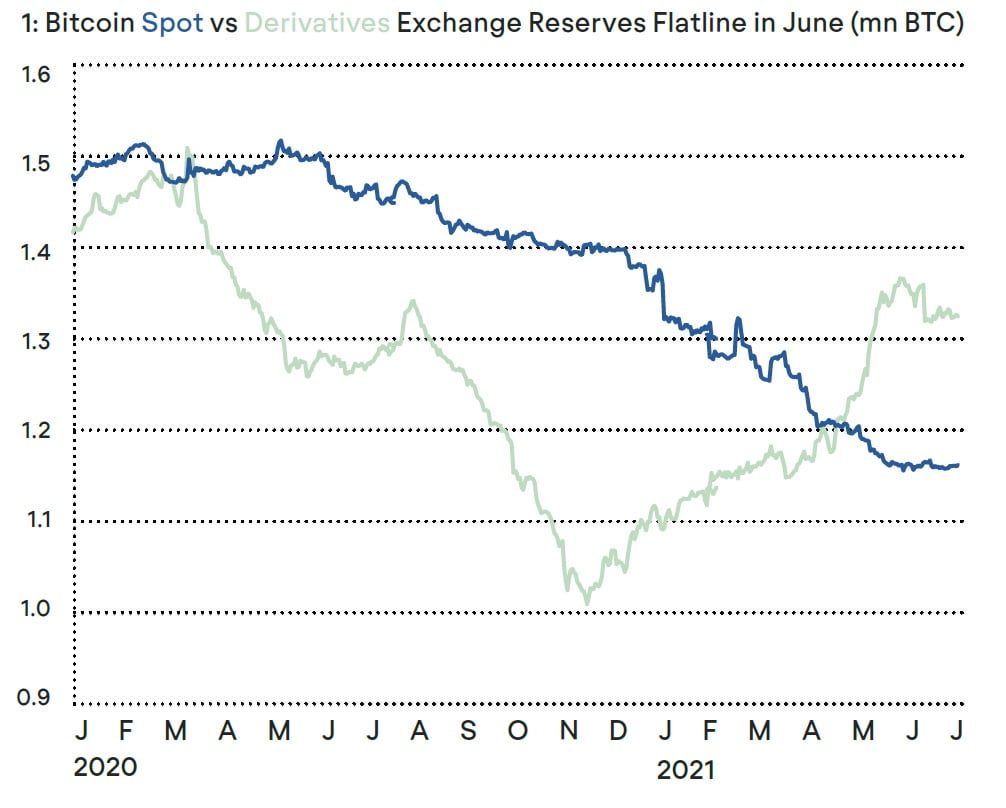 A mere 29k Bitcoins have been removed from exchanges since Bitcoin plunged below the $30,000 mark in May. July kicked off with some 42k Bitcoins less than the start of June. While the reduction is fairly small in comparison to where things started in 2020, it is a reduction nonetheless.

Though Bitcoin withdrawals off exchanges have met a flatline overall, spot market supplies continue a downward trajectory albeit seeing a slowdown in the past few months.

Understandable that traditional financial theories might not be fully coherent with crypto as of yet, the cost-of-carry will in the long-run affect futures prices more so than the other way around.

This won’t happen by accident either. There is enough readily available access to data (and the understanding of metrics) that will cue traders to supply and demand dynamics. 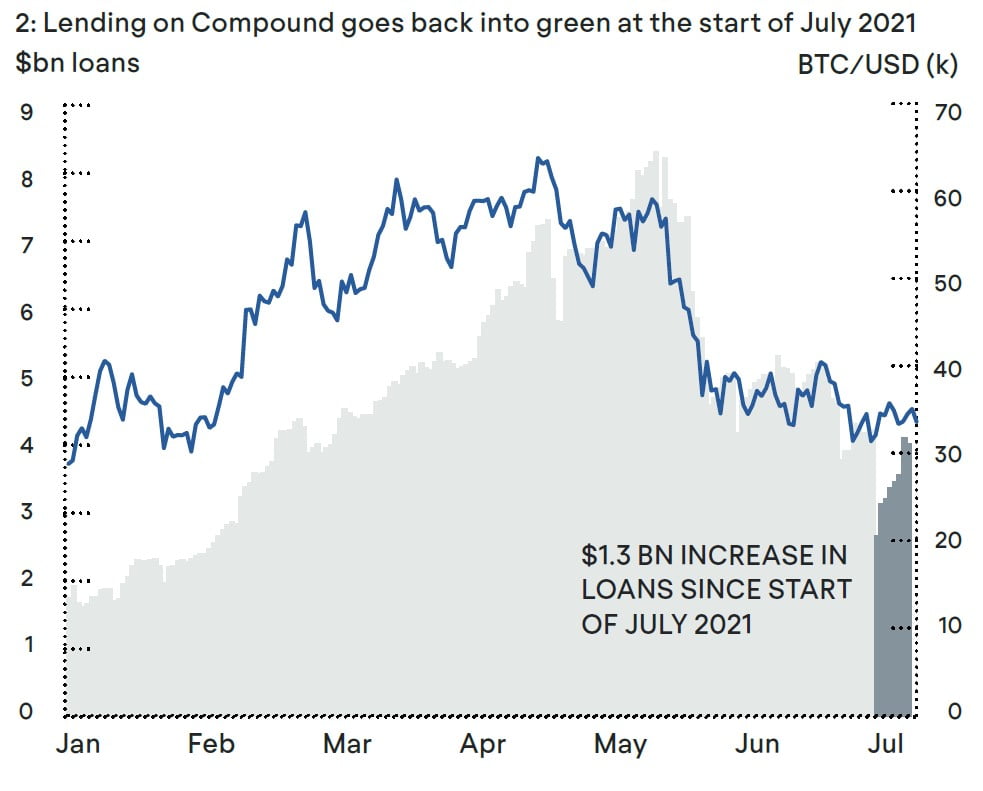 As for the end of the bear market? This is hard to predict, of course, but there are other intra-crypto dynamics worth looking at. Outstanding loans on DeFi protocol Compound have closely followed the price of Bitcoin, even if with a slight lag.

At the start of July however, as Bitcoin’s price continues to hover within the same $30-35k band, loans have increased by a whopping $1.3bn (see chart 2). This is the likelihood of traders expecting price growth that would cover their interest expenses. 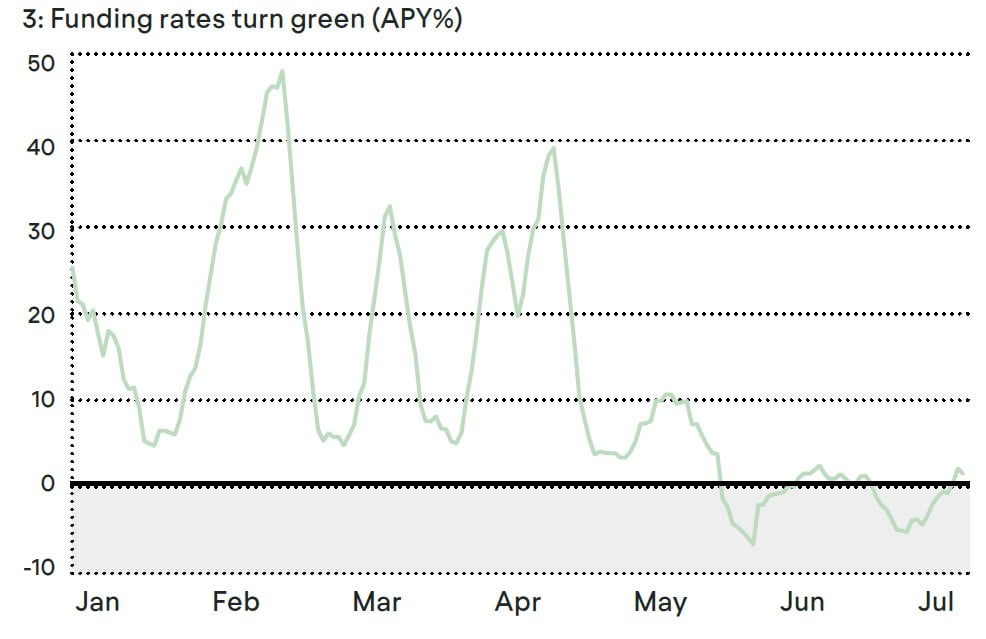 Meanwhile, futures funding rates (whereby long traders would pay shorts if positive and vice versa) has gone back into a ‘bull’ position at the start of July (see chart 3). This also happened in June when Bitcoin hit just above $41,000. This metric of course is an indicator of market direction after the fact, rather than a leading/causing factor for sentiment reversal. Bitcoin bull’s might not be out of the woods just yet. 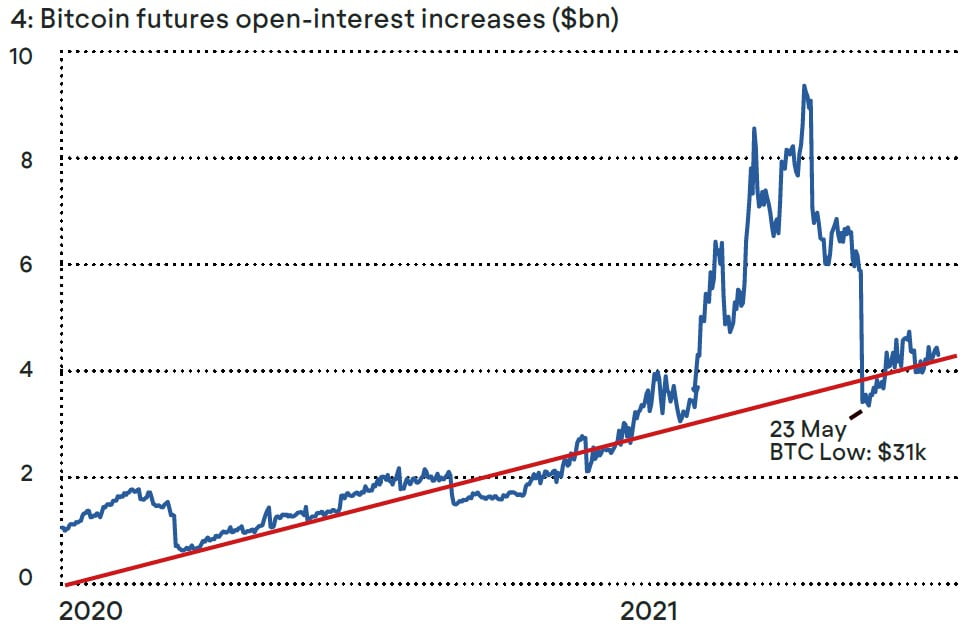 Something else going on...

Cryptocurrencies might be at the very start of an inflection point that could break correlations to Bitcoin that have riddled the industry.

At first glance, the tides lift and drown all boats together. Prices go up and down almost in harmony. 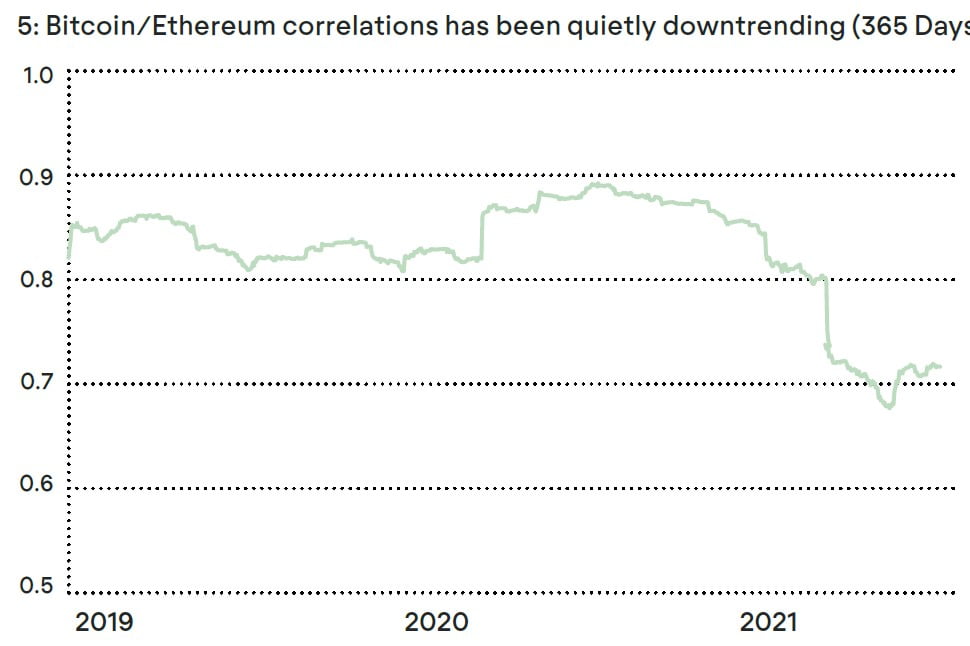 But Ethereum has been subtly changing the course of its correlation with Bitcoin (see chart 5). Since hitting a correlation peak in 2020 during ‘Black Thursday’, the ratio has dropped by nearly 25%.

And exchange supplies continue to dwindle at a much faster pace than that seen with Bitcoin. Since peak reserves in 2020, exchange balances of Ether have dropped by a massive 30% of the total circulating supply. 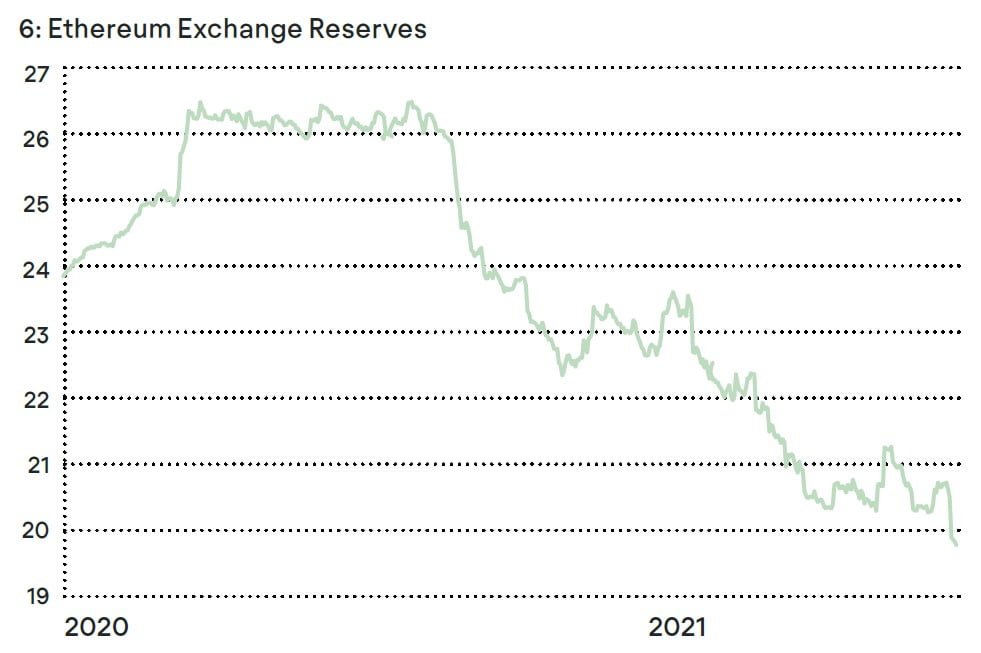 Since our Analyst Retro report last month, where Copper indicated the possible acceleration of reduced supply due to upcoming network staking, an additional 1mn ETH have been earmarked to drive the proof-of-stake mechanism.

The story doesn’t end there. Outside of price growth, cryptocurrency investors appear eager to participate in an overarching decentralised financial market. This has come after years of slow education on different cryptocurrencies and their underlying use case.

Protocols now are being utilised. And the majority are powered by the Ethereum blockchain. 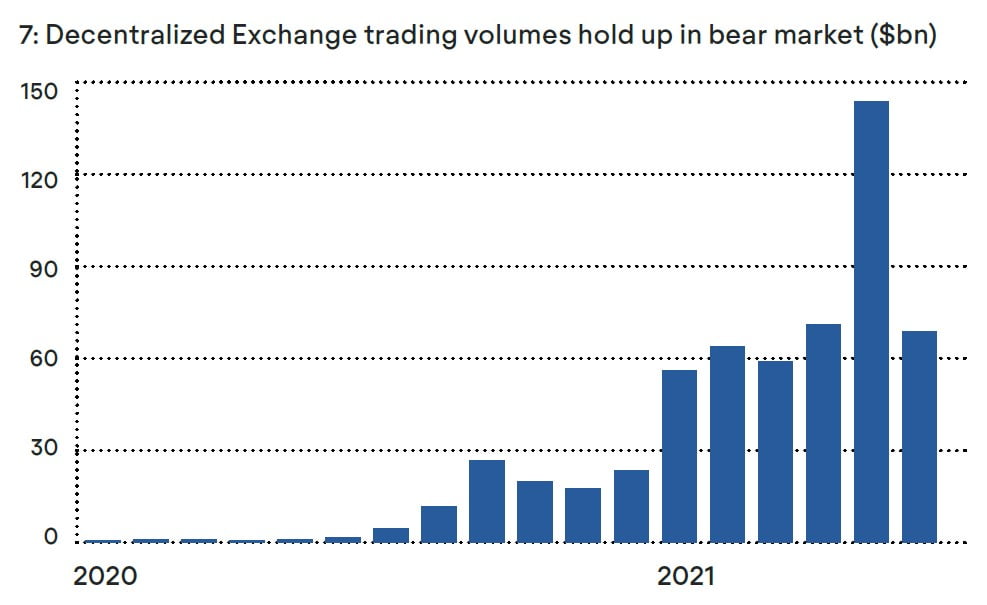 Unique Addresses on DeFi have almost tripled since the start of the year. Stablecoin supply has increased by 270% in 2021 alone sitting at well over $70bn. Year-to-date, with nearly 7 months left on the calendar, Decentralised Exchange volumes have exploded by 332% versus 2020 (see chart 7).

The demand for assets not seen as store-of-value (i.e. Bitcoin) are seeing immense growth. And while decoupling has yet to happen, the narrative of the potential can certainly get there as fundamentals eventually trump overall market speculation.