Every so often the internet throws up an undiscovered gem from the world of value investing. The latest offering is a selection of articles written by Benjamin Graham between 1919 and 1922 for the Magazine of Wall Street.

In this piece, I’m going to look at another of Graham’s Magazine of Wall Street articles in which Benjamin Graham compared two leather companies and asks, “which has the greater earning-power?”

Hide and Leather Vs. Central Leather

Graham begins his article by noting the improving fortunes of the leather industry of the time. “The third quarter of 1922 apparently marked the turning point in the leather industry,” he writes before going on to note that two companies Central Leather and American Hide & Leather are on track to report significant earnings increases for the year (the article was written towards the end of 1922).

The rest of the article is devoted to an analysis of these two businesses, to try and arrive at a suitable conclusion as to which was the best investment:

“With the hectic chapter of war inflation and deflation at last brought to a close, it may be well to ascertain in what condition and with what prospects these two leading companies are embarking once more upon a normal basis of operations. We shall try to form some estimate of their average future earning power, thereby to determine how their various securities compare in attractiveness at present prices. The elements to be considered are the following:
1. The actual and relative position of the two companies before the war.
2. The permanent effects of the war and post-war periods.
3. The current financial condition and earning power, as evidenced by recent data.”

Central Leather was the largest of the two businesses. It concentrated on the production of sole leather, while Am Hide focused on “the manufacture of upper leathers.” The two companies weren’t competitors, but they were both reliant on the prosperity of the shoe trade.

“We leave Am. Hide & Leather common out of account entirely, because the 125% of unpaid dividends on the 7% cumulative preferred entitle the senior shares to all conceivable future earnings of the enterprise,” the godfather of value investing writes.

He goes on to describe the opportunity further:

“Am. Hide & Leather preferred, representing thus the entire capitalization of the company, has a current market value of only about half the average pre-war sales. Central Leather’s three classes of securities aggregate $67,000,000 in market price, or somewhat in excess of its annual turnover. Otherwise stated, Central Leather is capitalized twice as heavily in comparison with its volume of business. This should be an important advantage in favor of the American company, for with the same margin of profit on its sales it should earn double as much on its capital. The actual results, however, have been just the opposite, because its ratio of net to gross has always been abnormally low. The average pre-war figures, given in our table, show a profit margin of only 4.74% on its total business, as against over 9% for Central Leather. After allowing for depreciation, American Hide & Leather’s net works out as only 5.40% on its capitalization, while Central Leather has earned 6.85%. On the latter’s stock capitalization alone the available balance averages over 8%.”

These two companies had enjoyed a brief period of success throughout WWI thanks to rising prices, which allowed them to sell inventory at better than average prices. However, when the war ended, prices returned to normal, and the two companies returned to their pre-war state.

“There is presented in the table showing Comparative Balance Sheets a skeleton balance-sheet of Central Leather at the end of 1921 and 1911. No one could guess from these figures the colossal vicissitudes of the intervening years. The inventory, the working capital, the surplus, are all nearly identical in both exhibits. The only significant change is a substantial reduction in fixed assets on one side, and in funded debt on the other. This represents chiefly the steady depletion of the company’s timber holdings, with a corresponding amortization of the bond issue. With American Hide & Leather, the case is very similar. But here the retirement of the funded debt, first effected out of surplus cash, seems now to have necessitated the reduction of inventories to an abnormally low figure.”

Re-basing the businesses to the different environment was proving to be a challenge, but Am Hide was achieving restructuring, while Central struggled. Graham noted:

“American Hide is now enjoying a higher earning power than its rival. The unofficial figures of $325,000 net after taxes for this period would be at the annual rate of over $10 per share of preferred-nearly 15% on the present market price of 70. Central Leather’s statement showed profits equivalent to about $9 on the preferred and $1.75 on the common. On its preferred and common combined, the results work out as 7.72% of market value-only half as attractive as the Am. Hide & Leather showing.” 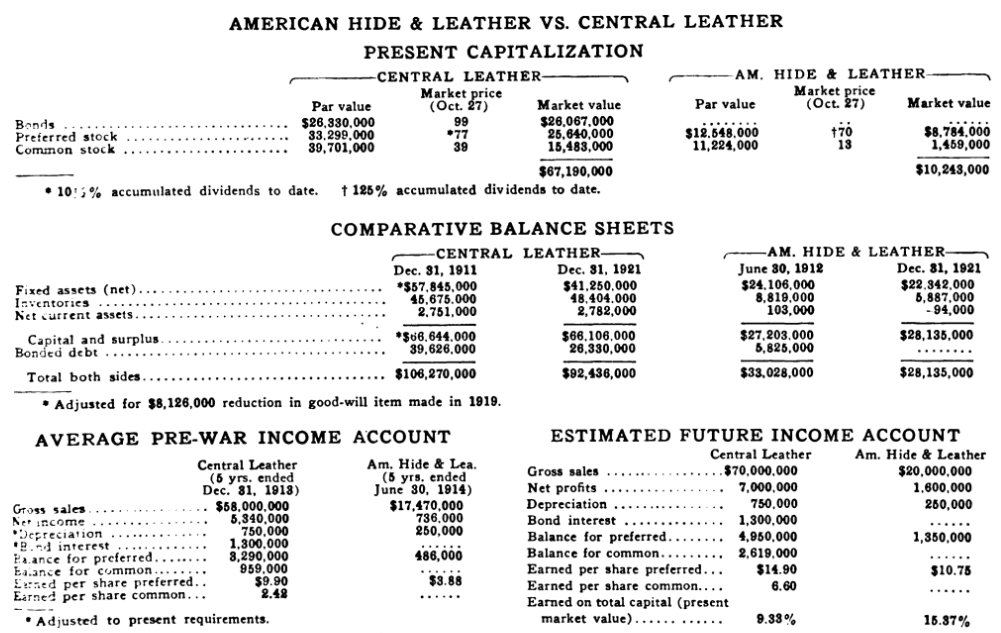 “The financial condition of both companies at the close of 1921 was sound. The notes payable were relatively small and are said to have since been reduced. American Hide has undoubtedly a distinct advantage in the absence of funded debt, as contrasted with the maturity of $26,000,000 of 5% bonds which Central Leather will have to meet in 1925. These bonds, however, have enabled Central Leather to carry a larger relative inventory, which may now prove fortunate through the recent advance in hide prices. The slower rise in finished leather is threatening to cut into the tanners’ margin of profit, but this discrepancy should be corrected in the natural course of events.”

So which company did Graham favor? After crunching the numbers, he concluded that based on the company’s earnings potential Am Hide & Leather could pay out $7 per share on its preferred stock. Meanwhile, Central could afford $4 on its common. In both cases, the yield was about “10% on the present price,” although “the absence of senior securities should entitle the former issue to sell on a lower basis of yield.”

The dividend potential of Am Hide swayed the author. Even though he cautioned that the outlook for both companies was far from certain, Graham went on to state “Central Leather common is much further removed from dividends, and the heavy prior claims of the bonds and preferred stock make its position essentially more speculative than that of American Hide & Leather preferred.”

This originally appeared at ValueWalkPremium.com