The Telegraph reported last week that leading investors are demanding FirstGroup Executive Chairman Wolfhart Hauser break up the transport conglomerate – for the third time in five years. The news comes months after Canadian activist investor West Face Capital sent a letter to the U.K.-based company pushing for a sale, accusing the board of failing to address its huge underperformance under its CEO at the time, Tim O’Toole. The executive resigned later the same month.

After parting ways with O’Toole, FirstGroup began an external review of its U.S. bus division, Greyhound, which could potentially end in a sale of the service. While it has been conducting the review, the company has been receiving interest from buyout firms. Now investors are calling on Hauser to fast-track the breakup of the empire, despite potential obstacles to a sale such as FirstGroup’s pension deficit and its need for U.K. government approval. Sandell Asset Management failed to persuade the company to split in two in 2013.

The government of Canadian province Saskatchewan made changes to its insurance regulations on Wednesday to limit the amount of deposits a life insurer may receive in life insurance policies. The changed policy will help protect insurance provider Manulife Financial in the face of legal claims from hedge fund Mosten Investment.

Manulife is fighting a claim by Mosten that the hedge fund can make unlimited premium payments and use them as an investment account, saying that the contract was never marketed for that use. Muddy Waters Research went short the stock earlier this month and said that a Mosten victory could be the death of the insurer as it would struggle to pay the returns it would be legally responsible for.

Following the regulation change, Manulife is expected to ask the court to dismiss Mosten’s claims. The Canadian Life and Health Insurance Association commended the change and plans to apply pressure to other territorial governments to follow suit and prevent similar lawsuits from being filed against other companies.

Also, Kase Learning announced that it will be hosting its second short selling conference on December 3. Readers of this newsletter can get a 10% discount on the conference – the only idea-led conference to focus exclusively on shorts – using the discount code ACTIVIST10. The code is valid whether you register to attend in-person or watch via the livestream.

The number of U.S.-based companies publicly subjected to M&A-related activist demands between January 1 and November 02 in respective years. 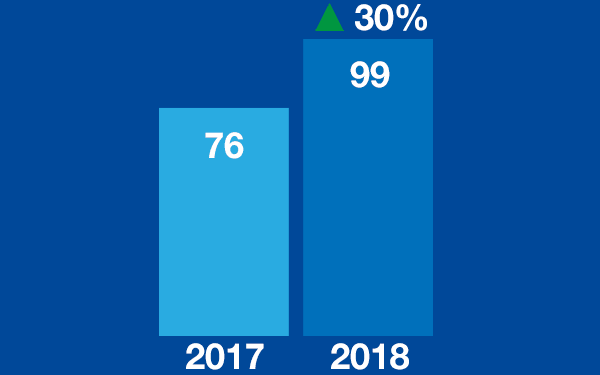