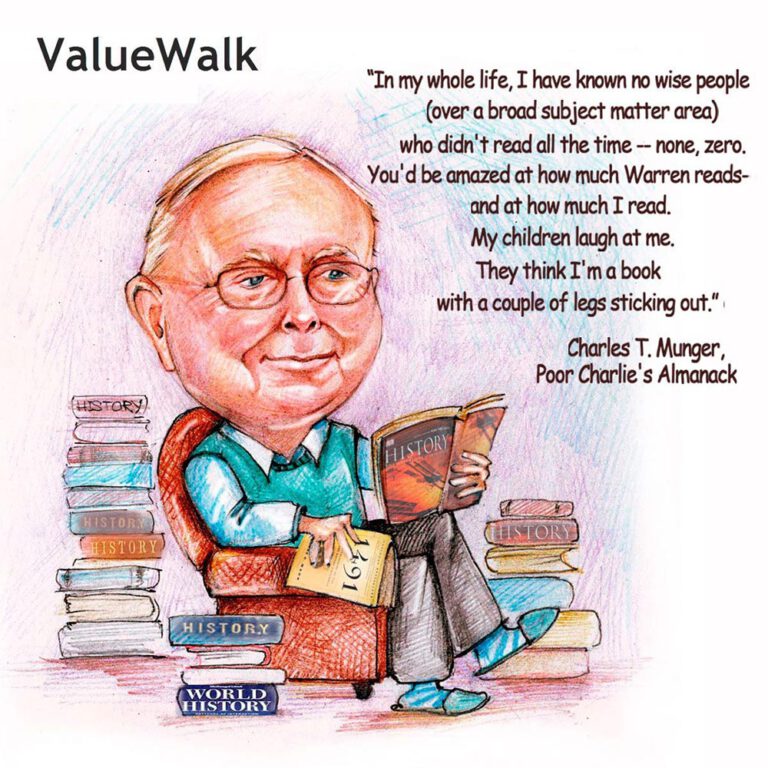 I am a big fan of Warren Buffett and Charlie Munger. The investing duo has managed to transform Berkshire Hathaway from a failing textile mill to a sprawling conglomerate worth over $500 billion.

Whenever I have a chance, I always try to listen to new interviews with Warren or Charlie. I recently listened to an interview with Charlie Munger at Caltech, and wanted to share it with you:

I was able to obtain a transcript of the interview from here, although it is very rough. You can download it from here.

Reader Investing Mindset tipped me that the Video is uploaded early.

While the interviewer could have asked some better questions, I still enjoyed watching Charlie Munger live. This is a screenshot I took during the live version on Monday, December 14th.

You can see that even at 96, he is still very sharp. It is also fascinating to see the Value Line investment manual on his left side. He is still searching for good companies to invest in, which is amazing.

Value Line offers a free stock analysis of the 30 companies in the Dow Jones Industrials average. It is a neat service to use.

There are a few great quotes, transcribed by Tren Griffin.

“Good investing requires a weird combination of patience and aggression and not many people have it. It also requires a big amount of self-awareness about how much you know and how much you don't know. You have to know the edge of your own competency.

"A lot of brilliant people are no good knowing the edge of their own competency. They think they're way smarter than they are. Of course, that's dangerous and causes trouble.”

“When I was young, there was practically nobody involved in investing and they weren't very smart. Now almost everybody's smart. A good proportion of the people in investing are sucked into finance by the money. That's an important development. I don't welcome it at all."

"I don't think we want the whole world trying to get rich by outsmarting the rest of the world. But that's what's happened. There's been frenzies of speculation and so on.  It's been very interesting, but it's not been all good.”

You find out whether you got the qualities to win at poker by playing poker. It helps to know the math and Pascal, but everybody with any sense knows that. Having a temperament where math and Pascal is almost as much a part of you as your ear and nose, is hard to teach.”

“In the early days we found some people instantly converted to our way of investing and did very well. Some people, no matter how carefully we explained it and no matter how successful they were otherwise could never learn that. Either they got it fast or didn't get it at all”

“A lot of people think they're way smarter than they are and they do worse than dumb people. It's very common to be utterly brilliant and think you're way the hell smarter than you are.

To succeed, start early, try hard, and keep doing it. All success comes that way."

“All the things that were really great when I were young have receded enormously. New things have come up and some of them have started to die. That is what the long-term investment climate is, which does make it very interesting."

“Everybody uses new technology, but it really helps to have a position that almost can't be taken away by technology. You can hardly think of a more old-fashioned business than a railroad business. But who in hell is ever going to create another trunk railroad?"

"Imagine the good luck of being able to take an existing railroad and double-deck all the trains, and raise the heights of the tunnels a little, and so forth. All of a sudden you've got twice the capacity at very little incremental cost, which is what that railroad has done."

''A friend send me a blue blazer made in China, bought on the Chinese internet, and it cost $42 delivered. It may not have been a perfect blazer, but it was an amazing blazer for $42. The person who created that blazer gave some little factory an order for 100,000 at once."

"They were pre-sold. It's the most extreme kind of "kill all our competitors" type of selling I've ever seen. How good is it for Brooks Brothers when somebody can deliver a blazer through the internet from China for $42? It didn't look like that bad a blazer to me either.”

“I spent a lifetime trying to avoid my own mental biases. A) I rubbed my own nose in my own mistakes. B) I try and keep it simple and fundamental as much as I can. I like the engineering concept of a margin of safety. I'm a very blocking and tackling kind of a thinker."

"I just try and avoid being stupid. I have a way of handling a lot of problems. I put them on what I call my 'too-hard pile.' Then I just leave them there. I'm not trying to succeed in my too-hard pile. I sometimes get things that are too hard and when that happens, I fail."

"The single most important thing, if you want to avoid a lot of stupid errors, is knowing where you're competent and where you aren't. That's very hard to do, because the human mind naturally tries to make you think you're way smarter than you are.”

“Early innovation by Giannini's Bank of America helped immigrants by giving them loans. He kind of knew which ones were good for it and which ones weren't. I think that was all for the good. That brought banking to a lot of people who deserved it."

"Bank of America helped the economy and helped everybody. Once banking got so they wanted to have soft hands and make zillions as speculators, those developments haven't been a plus. In other words, I like banking when they're trying to avoid losses prudently.”

“In my lifetime, advanced civilization has gotten ahead faster than any century that existed before. Nothing else was even close. It's utterly without precedent in real terms."

"It's unbelievable, I watched the whole damn thing quite literally because I've lived so long. It's been absolutely astounding.”

“Just think of how hard it is to get far ahead in life. Imagine, first you want to get ahead at Caltech. If you're very brilliant and work 80 or 90 hours a week for 9 or 10 years, you get tenure. That is not what I call an easy life and competing with the Homer Joe Stewarts.

I chose to avoid [academia as a career] because I knew I wouldn't win big at it. I would have been a perfectly successful professor by ordinary standards, but I would not have been a star.

"I'm a big fan of knowing the big ideas in pretty much all of the disciplines, the ones that are pretty easy to assimilate, and then using those routinely in your judgments. That's just my system. I don't believe in just constantly consulting with experts."

"I might consult experts in building a chemical plant or something. But in making investment decisions it's very helpful to be comfortable with the big ideas in all the disciplines. I think that life's more fun if you do that."

"Academia is not very good at the interdisciplinary stuff. Academia rewards a researcher who knows more and more about less and less, and there are real difficulties with that approach.

"It's harder to be that smart in the liberal arts, partly because many liberal arts professors are so leftist. It's hard to be pretty smart if you're crazy leftist. You're going to have the world a lot wrong.”

"What helps everyone is to get in something that's going up and it just carries you along without much talent or work. If you pick a really strong place, like say Costco, and you go to work at it, and you really are reliable and nice, you're going to do fine in life."

"Nobody wants to go to work for Costco after graduating from Harvard, or MIT, or Stanford. Of course, it's the one place where it would be easiest to get ahead. You would have a big tailwind."

“I'm proudest of avoiding some things I don't like. I don't like irrationality, and I've worked to try and avoid it in my life. I haven't succeeded completely of course. Nobody does. It's been a pleasant way of going through life."