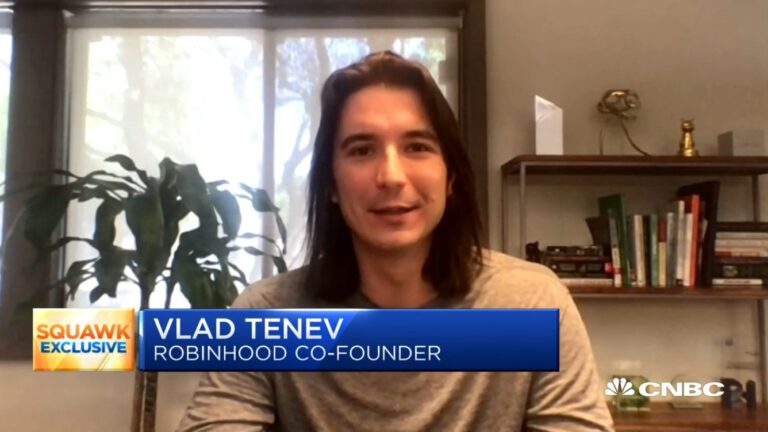 Following are excerpts from the unofficial transcript of a CNBC EXCLUSIVE interview with Robinhood Co-Founder and Co-CEO Vlad Tenev on CNBC’s “Squawk Box” (M-F, 6AM-9AM) airing today, Tuesday, October 27. Following are links to video from CNBC.com.

Vlad Tenev: I don't think anyone could've expected or predicted how 2020 would unravel or shake out. You know, the best we could do is control the things and improve the things that are under our control. So, as you mentioned, we had a huge increase in interest from customers, both new customers signing up for the platform and existing customers depositing more funds to go long the market.

SORKIN: So, you understand the mindset of your customers better than anybody. What do you ascribe this shift, this clear shift into the markets, and especially ascribe that shift that took place during the most volatile time in the markets?

Vlad Tenev: I think there was a confluence of factors. Firstly, the commission free model that we essentially pioneered, but last year, as you know around this time, the majority of the industry followed suit and replicated the model. And I think at that point, you saw the barriers to entry go down for investing, not just for our own customer base, but industry wide in the U.S. And so that allowed a new generation and a new type of customer who was previously underserved to start investing for the first time. And I think in March, what you saw was a lot of these customers who were now able to invest became interested in it because they saw the market have a large drop.

Vlad Tenev: What we've seen is they typically see volatility and market downturns as buying opportunities just because they're at the beginning of their investing journey and think they recognize that there's many, many decades for things to smoothen out in front of them. In terms of volatility, we have to be prepared for anything. It certainly would not be a surprise to see greater volatility heading up to the election and the weeks and months afterward. So we've been investing more in terms of making sure our processes are really solid. And we're taking a look at things like margin and margin requirements for different securities. We're also continuing to invest in the scalability and reliability and redundancy of our systems.

Vlad Tenev: We saw an impact of people depositing their stimulus checks into Robinhood. We saw, you know, deposits that were equal to or multiples of the stimulus amount.

Vlad Tenev: I think there's been a little bit of a shift in mindset. Investing and the ability to invest I think now that the barriers are lower, allowing so many more young people to participate it's clear to people that it's not just for the wealthy. And I think what you're seeing now is sort of a cultural relevance ascribed to investing that hasn't been there before. If you look at, for example, spending and consumer activity in America, nobody really asks the question of, "Is it too easy to buy a flat screen TV with one click and get it delivered?" But people are now asking the question of “Should it be this easy and low friction for people to invest in the markets?" And our belief is, the more we lower the barriers to entry, the more we level the playing field and allow people to invest their money at a younger age. The better off our economy will be and the better off society will be because we kind of live in the intersection of capitalism, democracy and innovation. And I think that it's a very interesting place to be in.

Vlad Tenev: We didn't introduce payment for order flow, but we did create the commission-free model that the entire industry has moved to. And that's, by and large, led to better cost structure for consumers. And you can tell that by looking at what happened to the stock prices of the discount brokerage houses right after they made the change. I mean, some of these companies, their stocks fell by over 30% because it was clear they were losing a major revenue stream. And the economics for consumers was only going to get better over time.

SORKIN: But it looks like, from my math, you're doing better. I mean, Robinhood makes more money on a pay for order flow than your rivals. Can you explain what that deal is and how that is the case?

Vlad Tenev: It's a standard, regulated practice across the industry. And it is a revenue stream that Robinhood has – one of several revenue streams. And as we continue to roll out more products, including our debit card, we'll get access to more revenue streams for the business as time goes on.

Vlad Tenev: Certain customers who do trade more actively and invest in options. I think about a little bit over 10% of our monthly transactors engage in an options trade. Even smaller number than that are what you would consider day traders. So certainly we've served these customers. We continue to serve them. And we think that the pricing is attractive. The majority of activity on the platform is what I would consider long term buy and hold and habitual activity. And I think that is the activity that we're focused on making really, really butter smooth, if we take someone who's never invested before and turn them into someone who can invest in a diversified portfolio over a long period of time and make that very, very easy, I think that's going to have a profound effect on the markets and on these people's lives.

SORKIN: There has been some criticism about this idea of gamifying investing across the board, by the way, just at the industry because you're seeing other companies to some degree add these gamification elements. I want to read you what Lee Cooperman said on CNBC recently. He said, "The government is giving you more money to stay at home and to go to work. The gambling casinos are closed and the Fed is promising you free money for the next two years. So let them speculate. Let them buy and trade. From my experience, this kind of stuff will end in tears." Does that concern you?

Vlad Tenev: There's a lot going on in that in that quote. Where should I start? It appears to be the case that the Fed has determined that it's important to maintain the stability of the markets and support the markets and the economy by lowering rates and delivering stimulus checks to people on an individual basis. Which has, you know, in history been an unprecedented act. So the government is stepping in and doing aggressive actions to maintain the sanctity of the economy and the markets. And I do think, from a macro level that's an opportunity for investors.

Vlad Tenev: What we've seen is they typically see volatility and market downturns as buying opportunities just because they're at the beginning of their investing journey and think they recognize that there's many, many decades for things to smoothen out in front of them. In terms of volatility, we have to be prepared for anything. It certainly would not be a surprise to see greater volatility heading up to the election and the weeks and months afterward. So we've been investing more in terms of making sure our processes are really solid. And we're taking a look at things like margin and margin requirements for different securities. We're also continuing to invest in the scalability and reliability and redundancy of our systems.

SORKIN: There's been a recent hacking attack that exposed 2,000 accounts. Why should the customer trust Robinhood over one of the more established, classic players, if you will?

Vlad Tenev: You're referring to instances where customers have been compromised outside of Robinhood, typically through their emails. And using emails and other means sometimes malware and phishing. Cyber criminals have been able to take advantage of customers. So in these cases, I think the first thing to note is we've done a lot of work especially and accelerated that work recently to encourage customers to sign up for two-factor authentication in the product, which is on top of the additional factors of security we provide by default. Teaching people about password safety and password reuse. And, of course, if customers do end up reporting fraudulent activity on their accounts, we've been compensating those customers 100%. So we've been doing more on the prevention front. But also, if this does happen to a customer, unfortunately, we work with them to make it right as quickly as possible.

Vlad Tenev: We're working on customer support across the board. And we've made huge investments and are continuing to make huge investments, both in terms of headcount – opening up offices in Tempe, Arizona and South Lake, Texas along with our existing locations. And really going across the product from different channels, all the way through to handling edge cases better and surfacing information and tools to customers before they even need to contact an agent. So it's a multifaceted solution. We're making huge progress across the board. And there are – you mentioned phones. There are instances where we're already doing outbound calls to customers to resolve certain issues. And that's certainly one of the multitude of tools that we're exploring to get people the service they need and resolve their issues as quickly as possible.

Vlad Tenev: Unfortunately, I probably shouldn't give particular advice or recommendations about different assets. It's something we are, you know, we're looking at. We hear from our customers that supporting crypto has been a great feature that they appreciate that Robinhood is doing. And we're continuing to invest in the space and make our crypto product better. I think giving people the choices and the abilities to have access to a wide variety of financial assets to sort of reflect points of view that they might have about things like inflation and the future of the economy is something that we're very passionate about.

Vlad Tenev: It's certainly not lost upon us that it would be interesting for our customers who are obviously investing in stocks, to one day see Robinhood on Robinhood. We're not in a rush. We know that, to us,  it's a financing event. And we've done several this year alone. And we feel very confident in our capital position. The primary focus is on making sure we offer customers the best possible service and make sure the systems are available when they need them the most.