The bigger the role of finance in our economies and lives, the bigger and more brazen the pyramid schemes, theft, and legal but reckless ways to separate customers from their money. The rise of digital finance means that cyberattacks and data hacks will become more prominent. But the biggest financial scandals are always inside jobs, usually unveiled when dramatic economic or financial events make it impossible to keep hiding a cheat.

The Biggest Financial Scandals This Century

This Houston energy conglomerate was widely considered one of America’s leading companies – until it filed for bankruptcy, revealing its success to be nothing more than an elaborate accounting fraud. The scandal was so traumatic that it destroyed the company’s auditor, Arthur Anderson, and prompted the US Congress to pass the Sarbanes-Oxley law putting onerous controls on public companies.

Lehman was a storied investment bank, the fourth largest in the US at the time of its demise. The financial giant and other banks got rich buying bundles of home loans and repackaging them as securities with spurious credit ratings, to be sold on to pension funds and other investors. When enough borrowers quit paying their mortgages, the global financial system nearly collapsed, saved only by government intervention.

Madoff was a pioneer on Wall Street, ushering the first electronic trading for stocks and founding NASDAQ. But he was also a fraudster who built an investment fund that was just a Ponzi scheme. His investors wanted to withdraw to cover other losses from the fallout of Lehman’s collapse, forcing Madoff to admit the money didn’t exist.

The board of Japan’s leading manufacturer of optical equipment ousted the company’s recently appointed president and CEO, Michael Woodford. The British native had uncovered a huge conspiracy to hide over $1.5 billion in corporate losses, a practice that had been going on for two decades. The fallout wiped 80% off the company’s share price and led to multiple arrests, as well as highlighted the risks of Japan’s opaque corporate culture.

The London Inter-Bank Offered Rate is the means for setting interest rates on $350 trillion of derivatives and credit instruments, such as mortgages. It has been set daily by a consortium of leading banks that compare bids and offers – but criminal settlements by Barclays Bank, sparked by whistleblowers, revealed rampant corruption, with bank traders manipulating the price to benefit their banks’ other businesses. In the US, municipal borrowers alone lost billions to rigged prices. Banks must stop using LIBOR to write derivatives contracts by the end of 2021.

1Malaysia Development Berhad was a state-owned fund meant to invest in power and infrastructure, but media revealed $700 million of its money was found in the personal bank account of then-Prime Minister, Najib Razak. This was the tip of the iceberg: the US Department of Justice says up to $4.5 billion was diverted from 1MDB funds by alleged criminal banker Jho Low, with the help of Middle East parties; Goldman Sachs was also caught up for having underwritten 1MDB bonds for unusually high fees. Najib was later convicted and jailed.

This Panama-based law firm provided tax evasion and shell companies to help rich clients dodge international sanctions. The extent of their work on behalf of global elites came to light following a data leak from a whistleblower, whose identity remains unknown. The so-called Panama Papers documented the legal and illegal ways rich people and corporations hide their money from governments. Mossack Fonesca closed in 2018 but nothing has changed for how rich people use secrecy.

A longstanding American consumer credit-reporting company, Equifax aggregates credit information about 800 million consumers and 88 million businesses worldwide. The company revealed it had suffered a cyber-security breach in which criminals accessed private financial data for over 149 million consumers, including credit-card details. Equifax executives were later found to have illegally sold his company stock before revealing the breach.

The biggest scam to date in the world of cryptocurrency. OneCoin was a Ponzi scheme promoted as a cryptocoin, but there was no underlying blockchain technology. Bulgarian fraudster Ruja Ignatova, who had hyped OneCoin as a challenger to Bitcoin, disappeared in 2017 after siphoning up to $4 billion in investor funds; she remains at large. OneCoin’s dubious status as crypto’s biggest scandal may not last: in October 2020, the US government charged BitMEX, a leading crypto derivatives exchange, with money laundering.

Singapore has become a hub for commodities traders – and a string of increasingly big financial scandals, capped by this year’s admission by Hin Leong Group that its profits were fabricated and its collateral of fuel for ships, used to secure bank loans, had long since been sold. The scam was revealed by extreme volatility in March and April sparked by the economic recession caused by COVID-19. 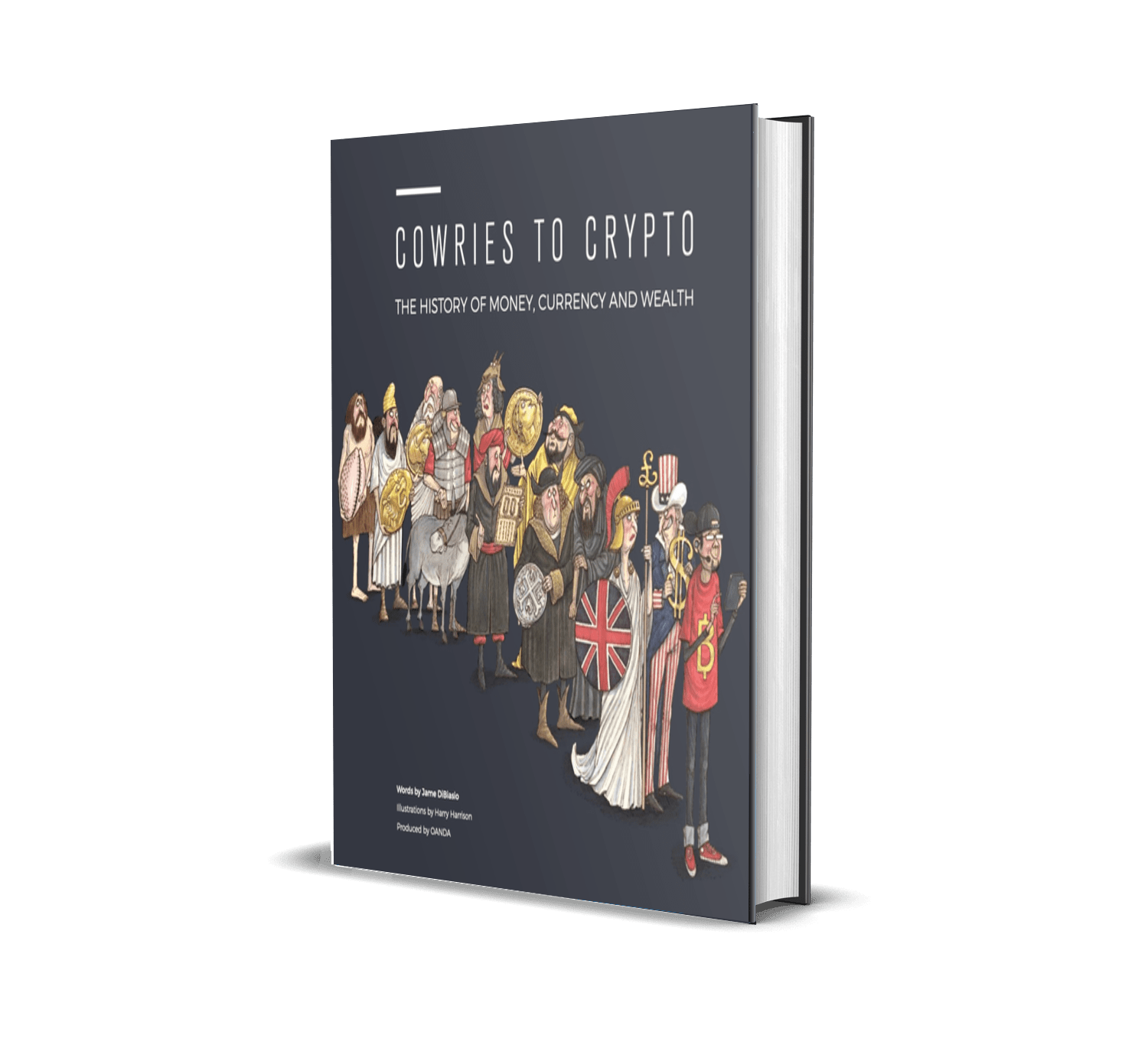 Cowries to Crypto: The History of Money, Currency and Wealth by Jame DiBiasio and illustrated by Harry Harrison is published by OANDA, a global leader in online multi-asset trading services. It is available now from amazon.co.uk, priced at £19.99.

Jame DiBiasio is an American author and award-winning financial journalist based in Hong Kong. He is currently founder and editor of DigFin Group, a website covering digital finance, at www.digfingroup.com. He is a published author of thrillers and history. Find out more at www.jamebooks.com.