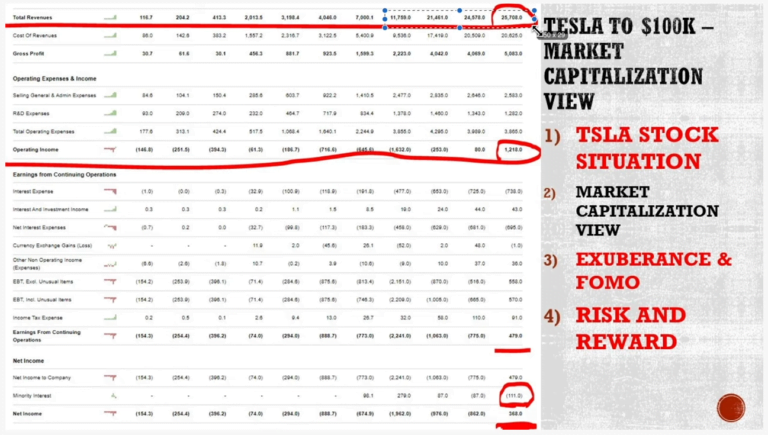 In this video, we’re going to discuss Tesla projections for the stock to hit 100,000. Tesla‘s stock is up 5 times over the last year, an incredible performance. I was always a Tesla bear and I remain a Tesla bear. I am also ready to hear the Tesla bulls telling me how stupid I was. However, for me, investing is about being more certain and not betting on things. Getting rich slow is the message because when you get rich quickly, you might lose it at the same speed you gained it. So, be careful and see what best fits you.

Good day fellow investors. In this video, we're going to discuss Tesla stock projection for the stock to hit 100,000, whether it is exuberant or not. The basis for this video was this email that I received from a friend from Belgium, discussing airport stocks that I analysed. But then he asked, I wish I could suppress fear of missing out when I look at Tesla, not from the standpoint as a car builder, but from different platforms related to artificial intelligence, better insurances, energy, transportation, etc. It's happening and I don't want to bet against. And in this video, I really want to discuss this because it's a delicate subject and there is the possibility, yes, as many say the Tesla hits, I don't know, 4000, 7000, 50,000, 100,000. But then we have to see okay, what it is about what will happen and how will this work in the long term. What is the risk and reward? And I'm going to give you also what helped a lot of people during the dotcom bubble, give you a market capitalization view on Tesla, and what should happen to justify the market capitalization. Whether it will happen or not, I really don't know. You don't know. Nobody knows, time will tell. But you can then play with the risk and reward.

If we look at Tesla's stock, it has had an incredible performance. It's the first boom from 2013 Tesla Model S, then 2017. Then there were some difficult times and since then, it's simply exploded over the last year, people made what six times their money, which is something really, really incredible and something that well, I'm not emotionally attached to this, but I really wanted to discuss because I have always been a Tesla bear. If you go to Google type in my name, "Sven Carlin Tesla," you will always see pretty bearish statements on Tesla on investing in Tesla. Yes Tesla stock can go 10x. But when we analyse the fundamentals as a value investor, it was never something that I would have invested. And then when I look at the stock, of course, I could have made five times my money and done nothing else or enjoyed life or whatever. But this is investing and this is a subject that I want to discuss in this video, fear of missing out, are we missing out for focusing on value investments, because this is what can happen and everybody else is investing in hot stocks like Tesla. And we, Buffett and people like me seem like old fashioned, I don't know dinosaurs investing in other things. And that's something very, very interesting.

Also, if you look on YouTube, every video on Tesla has thousands, millions, almost half a million of views. So there is huge interest in the stock and other stocks. But we can talk about it for a long, long time. The key is to see okay, what can help us in making a decision and what not. Whenever I see such a growth stock, there is a trick that works always and that's the market capitalization. That's what needs to happen to justify the market capitalization.

Tesla's current market cap is 277 billion, then we have to see okay, what needs to happen to justify let's say that you want a 5% dividend yield from this investment. Let's say that's what you aim for somewhere in the future. To get the 5% dividend, Tesla needs to make $13.85, $14 billion in free cash flows per year on the current market capitalization. If we look at revenues, the current revenues are 25 billion up from 29-24. So still growing huge jump here. Huge jumps in the past too. So it is a growth stock the growth has stalled, but it's expected to further grow when they lease their battery technologies, Robo-taxis and who knows cyber trucks and who knows anything else.

If I look at operating income 5% of revenue, if I look at net income, we are at 2% of revenue There is also minority interest that takes out 23% of net income to the company. So that's also something very interesting to analyse. Somebody is owning parts of the businesses, so they have to share that income. So net income is 1.5% of revenue. Let's say let's take the 500 million, so their profit margin is 2%. In order to reach $13.85 billion of cash flows, they need a 10% profit margin. So to make 2.5 billion on 25 billion, and then they need to grow five times revenue, to reach this dividend potential. Five times revenue, and five times profit margin, the profit margin needs to go to 10% and they need to grow five times revenue. That's the market capitalization. Now, what it is pricing in? So let's say that in year number, I don't know 2030. I want to get 5% dividend, they need to grow five times the revenue and five times profit margins. Five times growth in 10 years just for revenue is 17.4% growth per year, electric vehicle markets could grow at that rate, hopefully they will grow. So this is not so impossible from this perspective. But they also have to improve margins and to improve margins to reach margins that are 10% profits, you need to really be in a sector that has low competition, or you need to have a competitive advantage.

If they need to reach 100,000 as the, if the stock reaches 100,000 then the market cap needs to be up 66 times and go to 17.5 to really earn dollars. 5% dividends on that they need 875 billion in profits so those are the exuberant projections. If you read Peter Lynch, he says that the more hot stocks goes up, the higher it goes, the more exuberant become the new models, the new projection, the new forecasts. Usually he also says that such stocks fall at the same speed those go up because the trick here is to know when to sell such hot stocks because as fast as they go up, so they go also down, unfortunately. Hopefully not for all of those invested in Tesla, but this is one reason I'm not investing, I never invested because if you have seen could have stayed down, it didn't. Now it went up, it can go down. It's more gambling that really investing.

Going back to the 100,000 stock projection for Tesla. They need one point 75 trillion in revenue, which would be what 30 something percent, 40 percent of the US GDP in 2018. So 35%, so if they, their market would be only US then each year First in the US would have to spend 40% of their income to buy Tesla products. This is what's priced in okay globally, let's say 5% of everyone's income should go to just Tesla without competition that per year. And then if we go to EV sales, blogspot we can see here that Tesla doesn't have domination in the electric vehicle market. It gets to the first six months of 2020 19%, which is very good, very strong market share. But these guys are catching up. We recently saw an Audi eTron and I must say it looks pretty impressive. And if we look at sales of cars in Europe, and Netherlands, Norway and Spain of electric vehicles, we see that Audi is the king in Europe now, competition is coming then KIA, then Volkswagen and Hyundai, then Toyota, and only then comes Tesla. Of course with new products United States, China, who knows where new come Giga factories, this might change. But my message is the competition is not sitting still the competition is there. Now the Volvo is the most sold the new Polaris or how it's called. So, for me, it's very, very difficult to see to justify investing in Tesla. Of course, I'm not seeing it. And that's exactly what I wanted to tell also people here, if you don't see it, you wait for a pitch where you can see it, where it will lead you to your investment goals, and that's investing. If we do things fear of missing out, we might get hurt. We have to understand what does it mean to invest. And the trick to investing is just to sit there and watch pitch after pitch go by and wait for the one right in your sweet spot. And if people are yelling swing you bum, ignore them. This is investing that works over the long term. Only when you find something. Tesla has never been my darling, will likely never be. And that's it.

On the risk and reward. Well, a lot of things have to happen to justify this market capitalization, a lot of things have to happen also, from the competition side, there should be no competition. There should be just very profitable growth, 5x in revenue and 5x in margins. If they can do it, then they deserve to reach amazing levels with the stock price, but they have to first do it and I was always bearish, what was this 2019-2018, and if I look at what happened since I was bearish on the stock was at 18-19 and now didn't grow. It grew what? 20% in two years, so the growth isn't so stellar, of course, it takes time, it takes investments, but things aren't going as projected. But the stock exploded. So my fundamental analysis was pretty right. Of course, it can be wrong in the future. Yes, I know, for all the Tesla bulls, I don't understand Tesla, but that's fine with me. And that's also the message I want to give to my friends here from Belgium. If you understand it, you will see, okay, invest. But there will be a lot of other opportunities in the future and perhaps a little bit less of crap. Thank you for watching. Looking forward to your comments. I know there will be a lot of them. So let's enjoy the comments and see what happens there. Thank you. I'll see you the next video.