For those who just came back from a 15 year space mission: Wirecard AG (ETR:WDI) is a German company that according to its website is “one of the world’s fastest-growing digital platforms for financial commerce”. It managed (briefly) to achieve a market cap of close to 25 bn EUR and is part of the German Blue Chip index DAX 30. The stock lost -62,71% today which is most likely a record for a DAX company for a single day.

This is an article I wanted to write for a long time but I was actually afraid to do so for several reasons.

Wirecard is a company/stock that I have been following for a very long time. My first “encounter” with the company ended in a kind of “5 minutes of fame” situation with some very unpleasant side effects.

The story starts in May 2008 when a post appeared under the pseudonym memyselfandi007 on Wallstreet Online, the largest German stock community/forum. (fun fact: This Thread seems to have been read 17,8 million times, so a lot more than all my blog posts on V&O combined….).

The post has been redacted/censored substantially but in essence the issues back then were the following:

Wirecard directly tried to block anything negative and if one reviews the threat, some of memyselfandi007’s subsequent postings have been deleted despite only stating facts. Memyselfandi007 finally got kicked out of the forum.

What happened next was even more interesting: A guy called Markus Straub copied this post and published it in a financial newsletter as a short recommendation under his name. This financial publication was/is (?) part of a shareholder organisation (SDK) that claims to protect share holders. It seems that he and a hedge fund friend of him shorted stocks before publishing the short reports and he seems to have done this with others stocks as well. For this he had finally go to jail for market manipulation. But even  still in 2008, Wirecard tried to aggressively sue everyone even only remotely connected, even the poor memyselfandi007, who only had written this fact backed post in this stock forum and had nothing to do with the subsequent publication and market manipulation.

The scandal back then hit even the front page of the major German financial magazine Handelsblatt and the anonymous blogger memyselfandi007 was mentioned as the starting point of the whole scandal (and got his five minutes of anonymous fame).

In between however, memyselfandi007 had the quite unpleasant surprise to be called directly at his work place by the German Criminal Police (similar to the FBI) and asked to show up in the Criminal Police HQ the very next day. Luckily, the police officers were quite friendly and at the end concluded that memyselfandi007 was just a witness with no relationship to anyone else although they didn’t mention this when they called him. They also mentioned that Wirecard desperately wanted to know who this memyselfandi007 was to sue the shxx out of him, but the police didn’t pass on the real identity.

Interestingly no one cared back then if the clearly observable issues at Wirecard were valid or not, both the police and the press only concentrated on the market manipulation of the evil short sellers

One little success back then was that Wirecard actually republished their annual report, correcting some of the more obvious mistakes that memyselfandi007 mentioned. However as a result, the report became even more intransparent.

Wirecard also tried to sue any other forum where memyselfandi007 was active and potentially negative things were written about the company.

The result of that episode was that poor memyselfandi007 was pretty scared to publish anything against the company but was convinced that the company was a fraud.

During the following 11 years, every other year, some reports from short sellers surfaced that shed light into some of the issues Wirecard had. Interestingly this only lasted for days and weeks and the share price always recovered.

Wirecard then smartly rode the fintech/payment wave and actually managed to build some real businesses on top the rotten core. memyselfandi007 followed the company but  the reporting remained opaque and they never really explained how they make their money.

The peak of this whole story in my opinion is that Wirecard made it into the Germany DAX 30 in September 2018. The stock syk-rocketed as we can see in the chart: 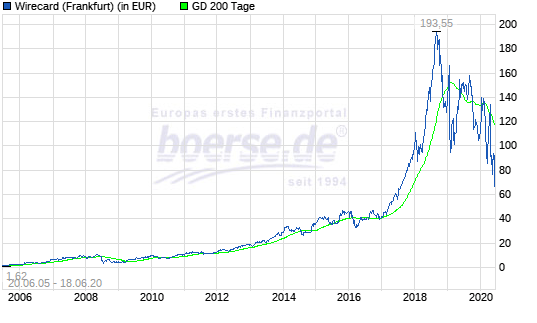 At its peak, this company was “worth” close to 25 bn EUR.

One of the very few persons who had the guts to openly criticize Wirecard was Dan McCrumm, who via FTAlphaville published some critical articles who were very well researched. If I am not mistaken, the earliest articles were published in 2015 before more substantial coverage came in in 2018 and 2019.

In typical fashion, Wirecard reacted in suing McCrumm and managed taht even the German regulator BAFIN to go after McCrumm as a market “manipulator”.

Nothing came out of this other that an official short selling ban for a period of time. Interestingly again, no one from BAFIn or the Police actually bothered to look at Wirecard itself. Personally, the FT for me gained “hero status” to not back down despite the massive effort to discredit them.

In 2019, the boss of the supervisory board hired KPMG mainly to independently confirm that everything is splendid at Wirecard (E&Y is the auditor of Wirecard). This is the summary from Wikipedia:

In 2019, KPMG was hired by the German payments company for an independent audit to address the mentioned allegations. Wirecard claimed that KPMG concluded that no discrepancy was determined during the audit.[61] However, on April 28, 2020, Wirecard shares tumbled 26% when its auditor announced that it did not receive sufficient documentation to address all allegations of accounting irregularities.[62] Then on June 5th Wirecard’s headquarters was searched by police as part of a criminal investigation into potentially misleading statements to investors by CEO Markus Braun and three other board members regarding the audit.

I actually read the report in full and it was unbelievable. KPMG were denied access to most information and what they saw raised all alarm bells available. Any person familiar with the big 4 would understand that the language that KPMG used was so strong that there is now doubt that something was VERY wrong at Wirecard. The Wirecard statement just shortly before the release in my opinion was clearly a criminal act. My personal highlight of the report was an M&A transaction where Wirecard bought a company in India from an SPV for 300 mn USD that was acquired just one month before for 30 mn USD. Wirecard claimed that they didn’t know who the ultimate beneficiary of the sales price was. If I ever have seen something looking like explicit money laundering at a DAX company then it was this transaction.

Why I never shorted again

I have to confess that I was short the stock in 2008 but then never shorted again, even not after the KPMG report. The issue was that although I knew it was a fraud, the company got away with everything. There were enough stupid analysts/investors who didn’t care at all if the company was a fraud or not, as long as the share price kept rising. It was just impossible to tell when the company would go bust, especially as the management seemed to have an endless criminal capability. Combined with my obvious inability to time investments I decided not to short again since 2008.

Lessons to be learned from The "German Enron" - Wirecard

Overall I do think that it is very positive that this epic fraud has come to an end. It will be interesting to see if and who gets convicted. Personally I also find it interesting how some professional analysts and investors (hello DWS and Mr. Tim Albrecht…) will justify their part in this.

I guess the regulated part (i.e. the bank) will be rescued but the stock is fundamentally a clear zero. Although these days stocks who file for bankruptcy seem to be hot investments.

As a very funny side story, Wirecard now claims that they themselves have been defrauded but I guess that is a pretty weak defense.

I deeply hope that a good journalist will write a book about this and that they will make a movie about this "German Enron".