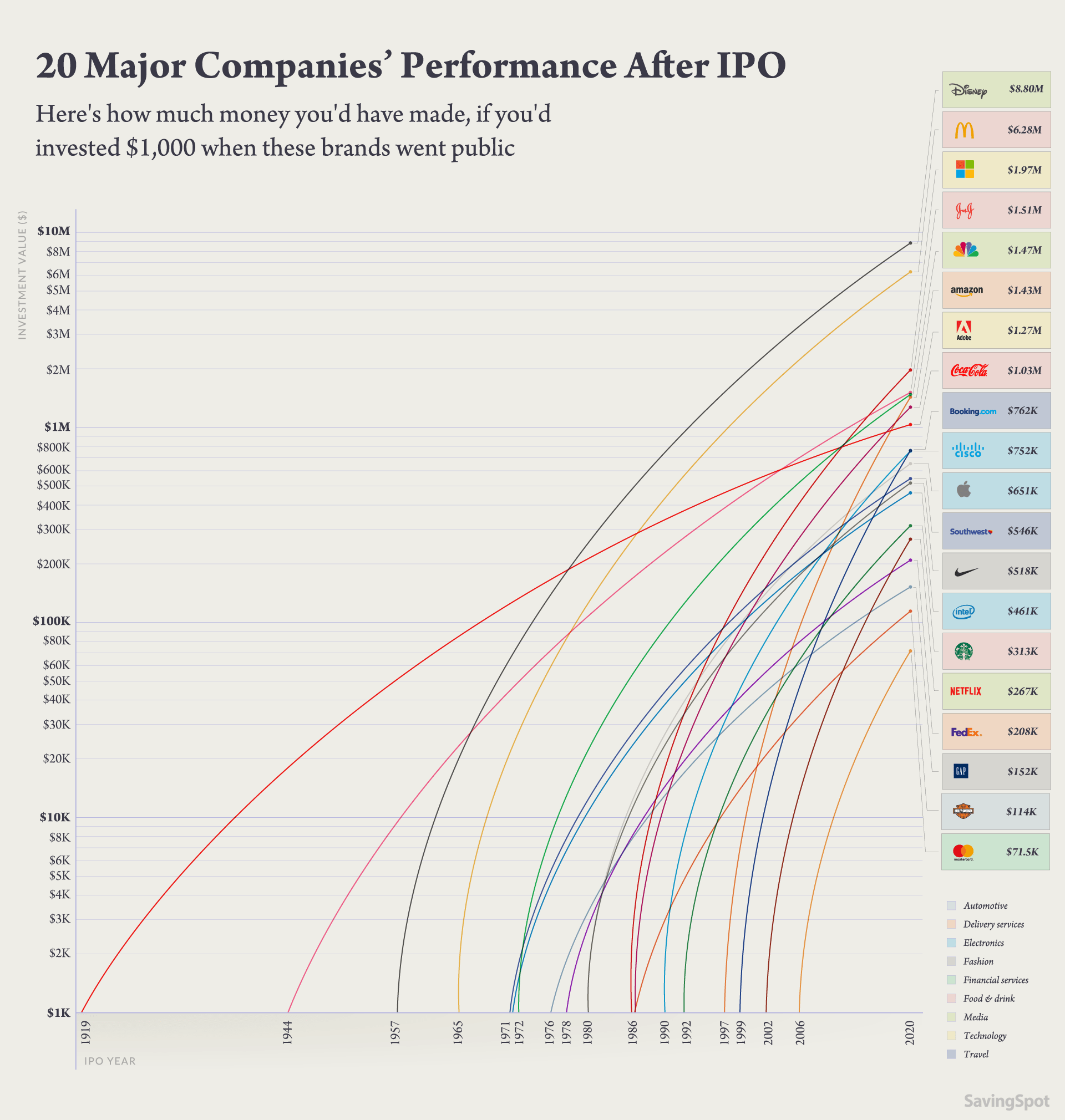 Hindsight can be a terrible thing, especially when it comes to investments. No matter how successful you are as an investor, there will always be that one company that got away, the one that could have changed your life forever if you’d jumped onboard quickly enough. But then again, there’s also those companies that promise everything when they go public and deliver only disaster instead for anyone who invests in them. These are the ones that make us cautious and miss out on the unicorns. So, if you’re someone whose investment portfolio is a story of regrets and missed opportunities, the rest of this article may bring some painful memories, because it’s all about how much money you could have made if you’d invested $1k when these companies made their initial public offering.

If you invested $1K in the following IPOs 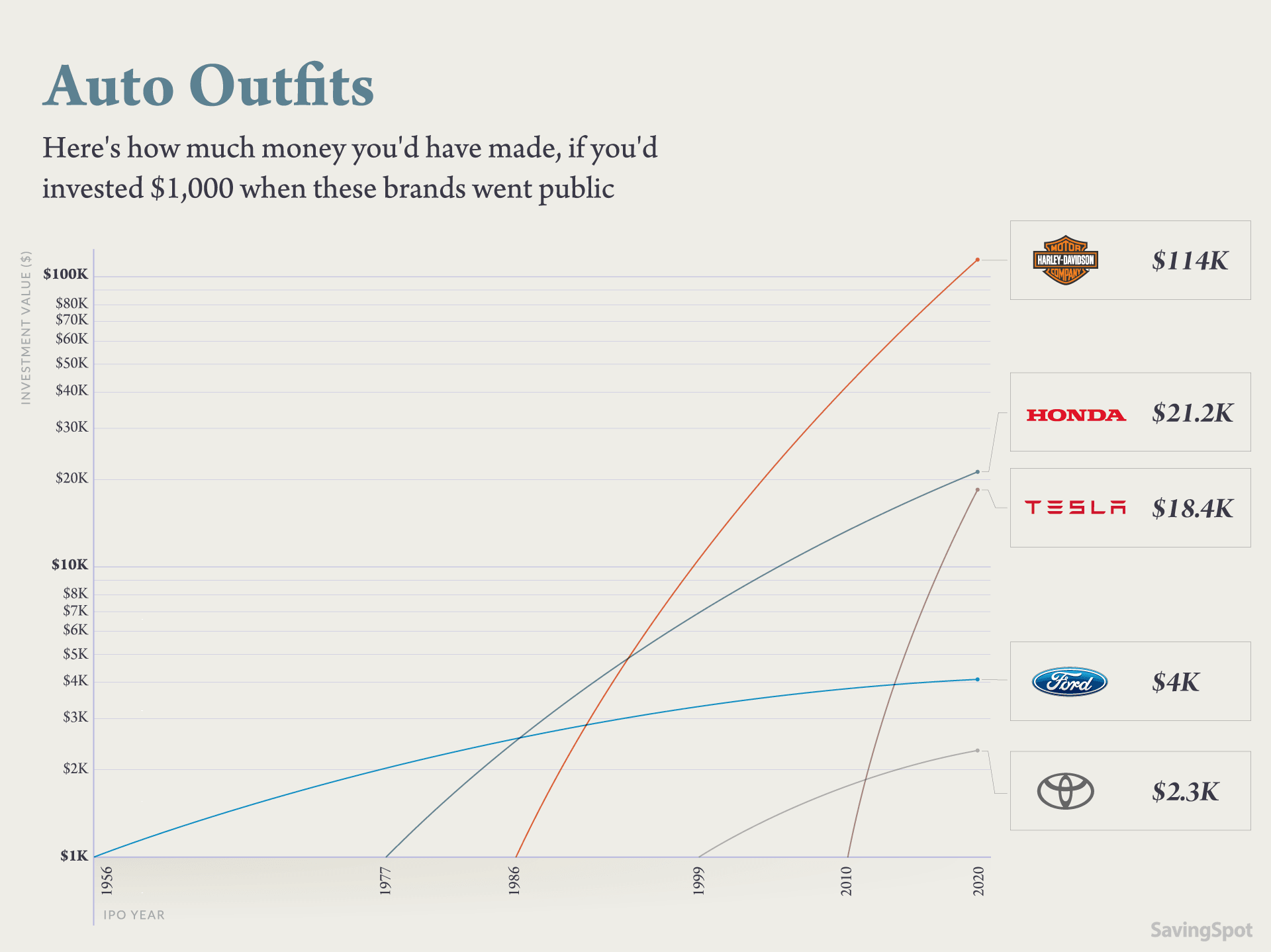 Clearly the fastest-growing company in this industry is Tesla, and if you’d invested $1k on its IPO in 2010, it would have already made you $18.4k. Imagine how much more it would be worth if Elon Musk ever achieves any of his ambitious space goals. However, the big winner here would be anyone who invested $1k in Harley Davidson back in 1956, as that would have helped them to an impressive $114k. 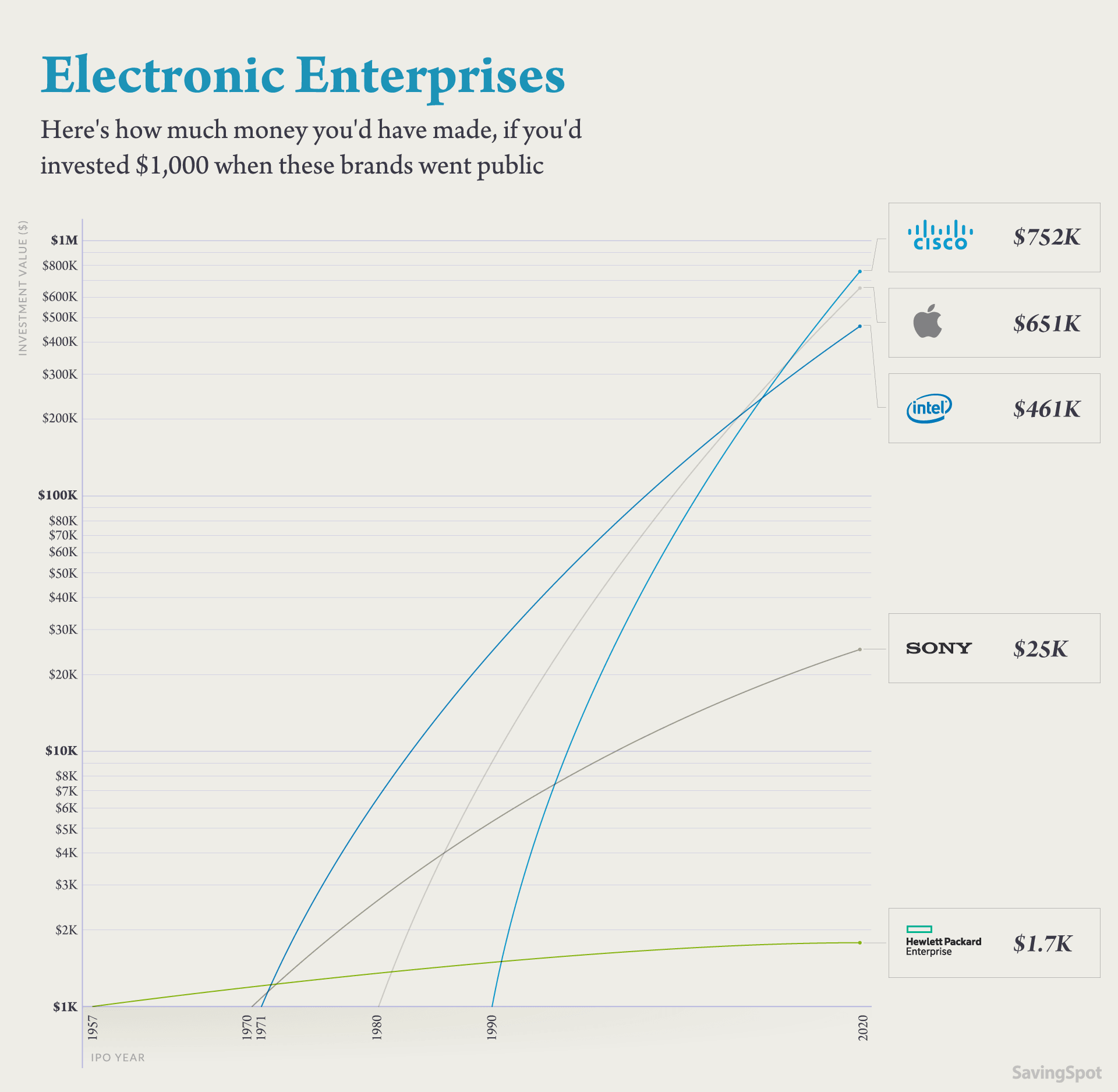 The automotive industry can’t compare for value with the electronics one though, as three of these companies offer a potential return on investment that blows Harley Davidson off the road. A $1k investment in Apple when it went public in 1971, unsurprisingly, would have been a good move, with that now worth $651k, but even that only comes second to Cisco, which has shot up to $752k since its IPO in 1990. 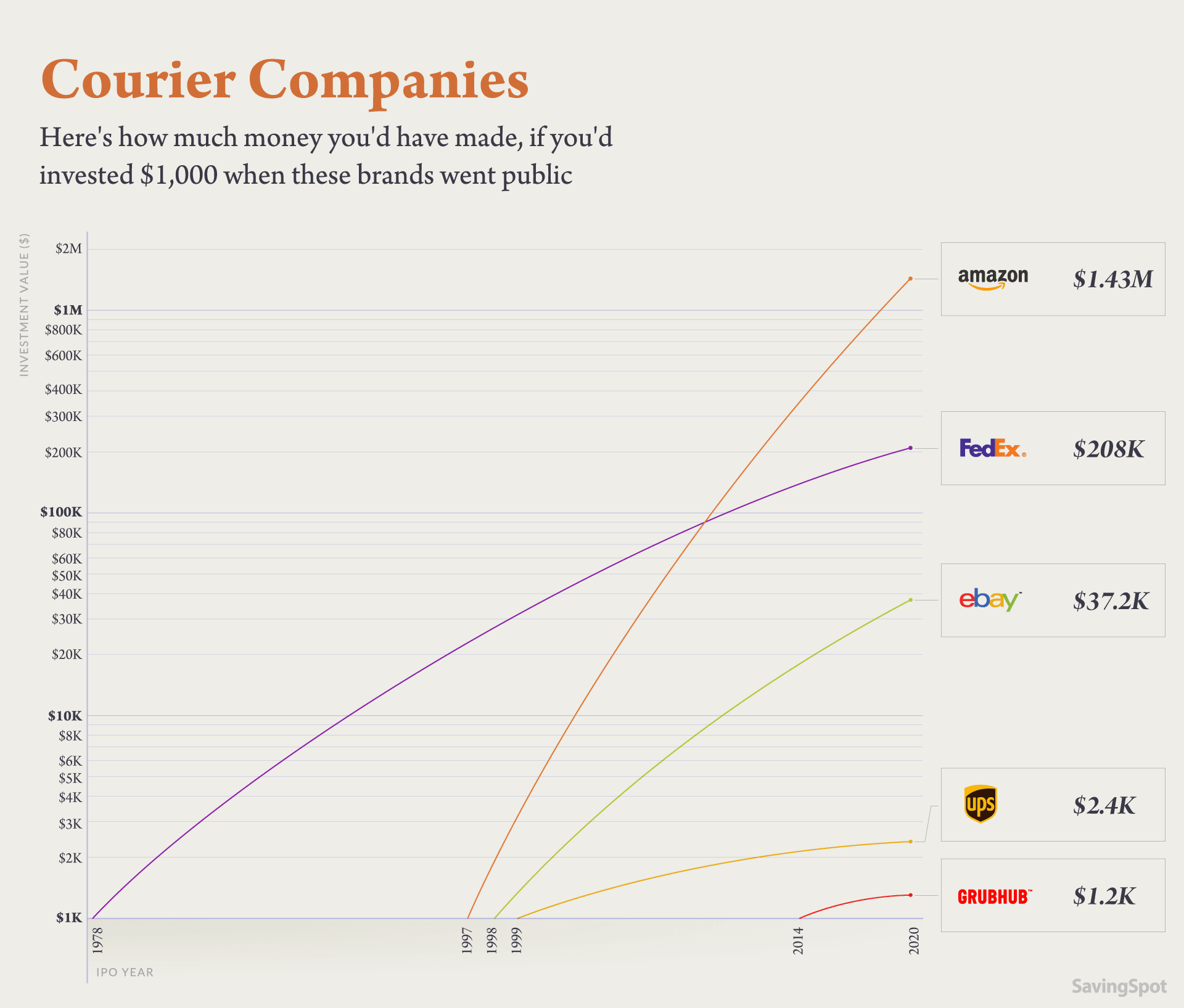 In 1997 Amazon went public as an online bookstore with big goals at a time when the internet was still very new and far from the center of everyone’s lives that it is today. As is Amazon of course, so it’s not a huge shock to see that a $1k invested 23 years ago would represent an incredible $1.43m today. Has anyone got a time machine? 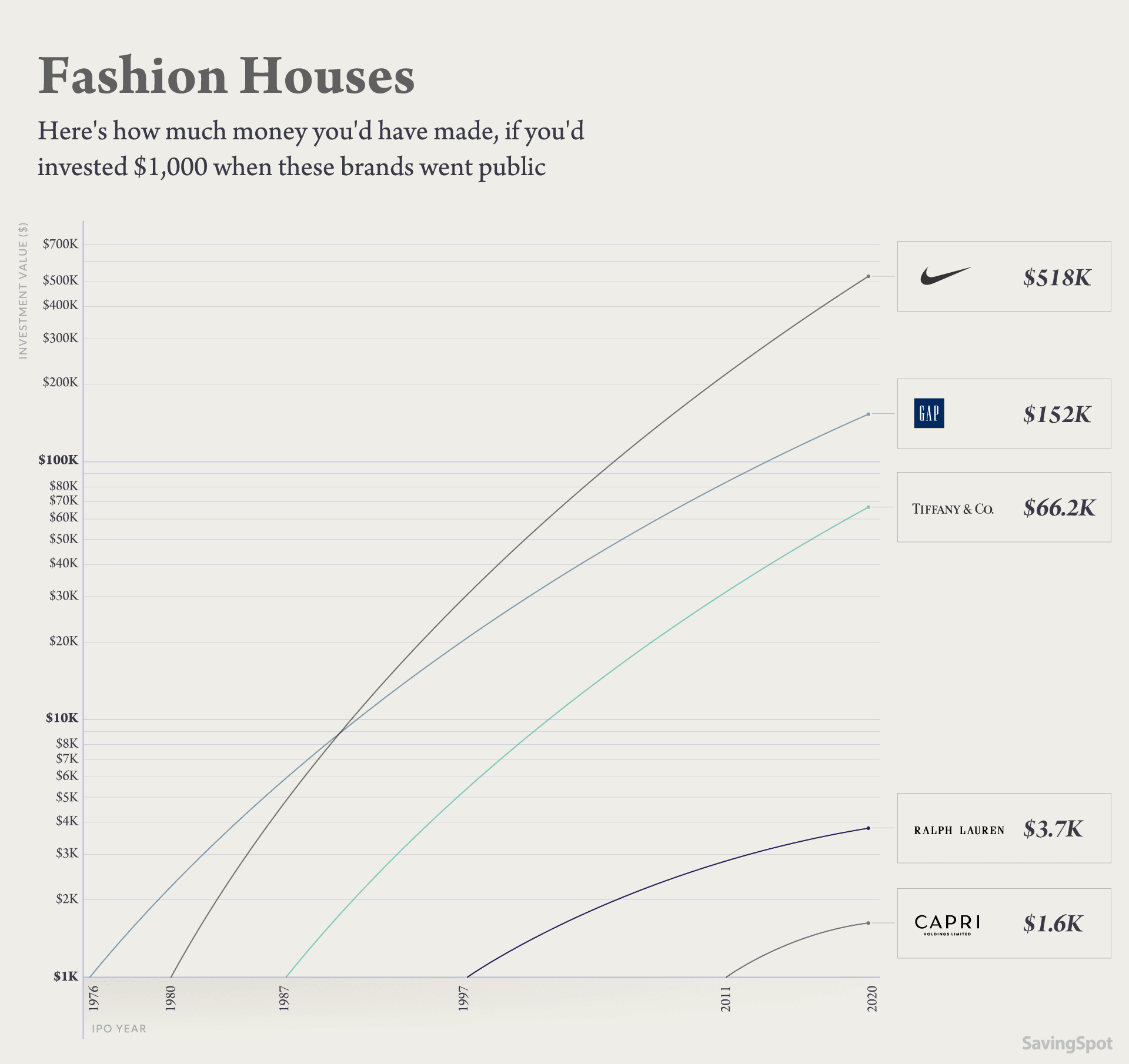 Fashionistas might scoff at the idea of Nike being in this category, but nobody could complain at the return of $518k from a $1k investment in the sportswear giant, which went public in 1980. Gap was four years earlier than that, but has only risen to a comparatively meager (but you wouldn’t complain either) value of $152k, while Capri has gone from $1k in 2011 to… $1.6k in 2020. 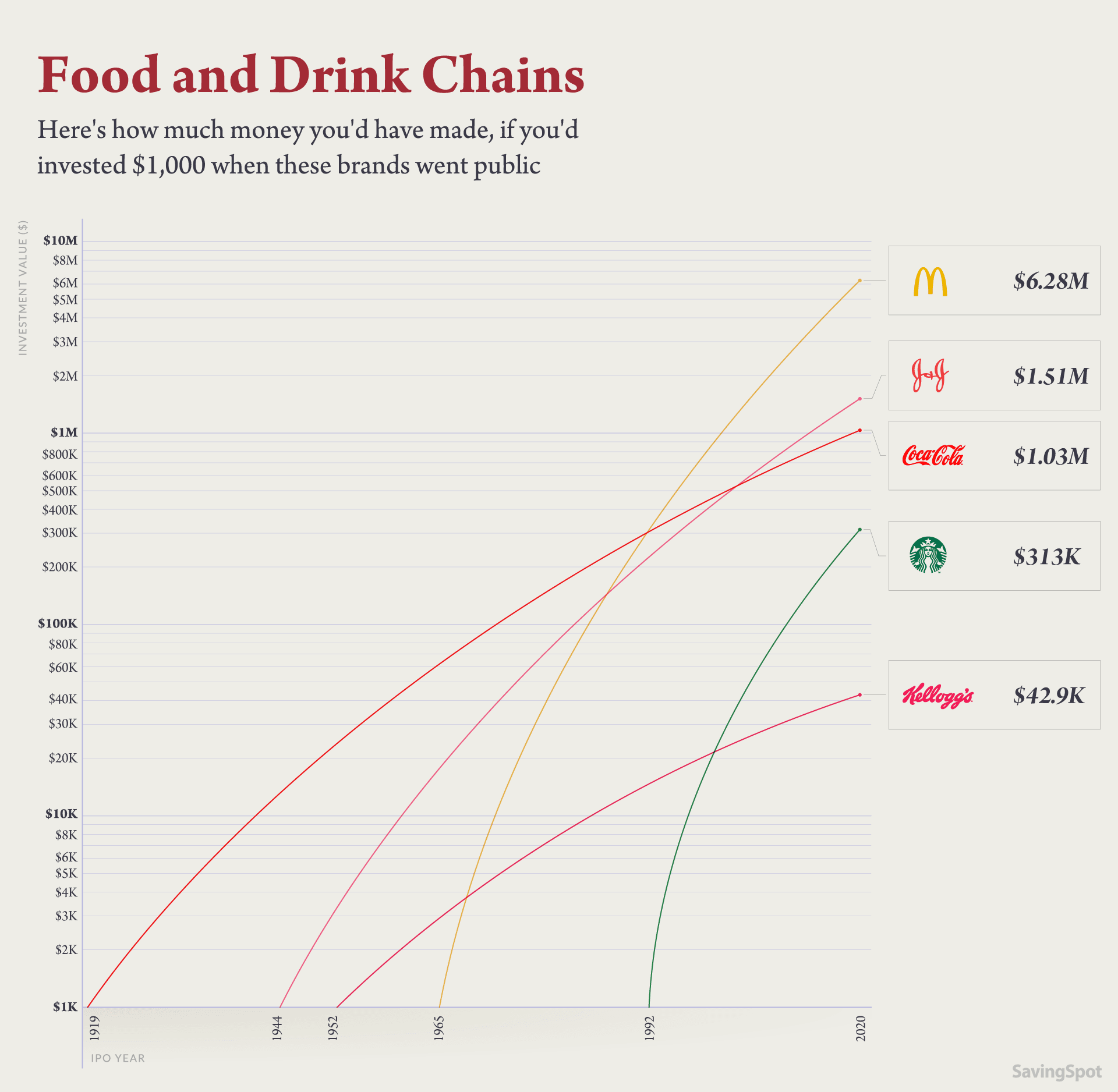 There’s some heavy hitters in this category, not least McDonalds which had 500 locations when it went public in 1965 and has over 38,000 today, spread all over the world. That incredible growth has been reflected in the value, with a $1k investment now worth $6.28m, which would buy you an awful lot of Big Macs. Another global giant, Coca-Cola, went public way back over 100 years ago, so even the oldest people alive today would have had to have started their investment careers very early to receive $1.03m for their $1k. 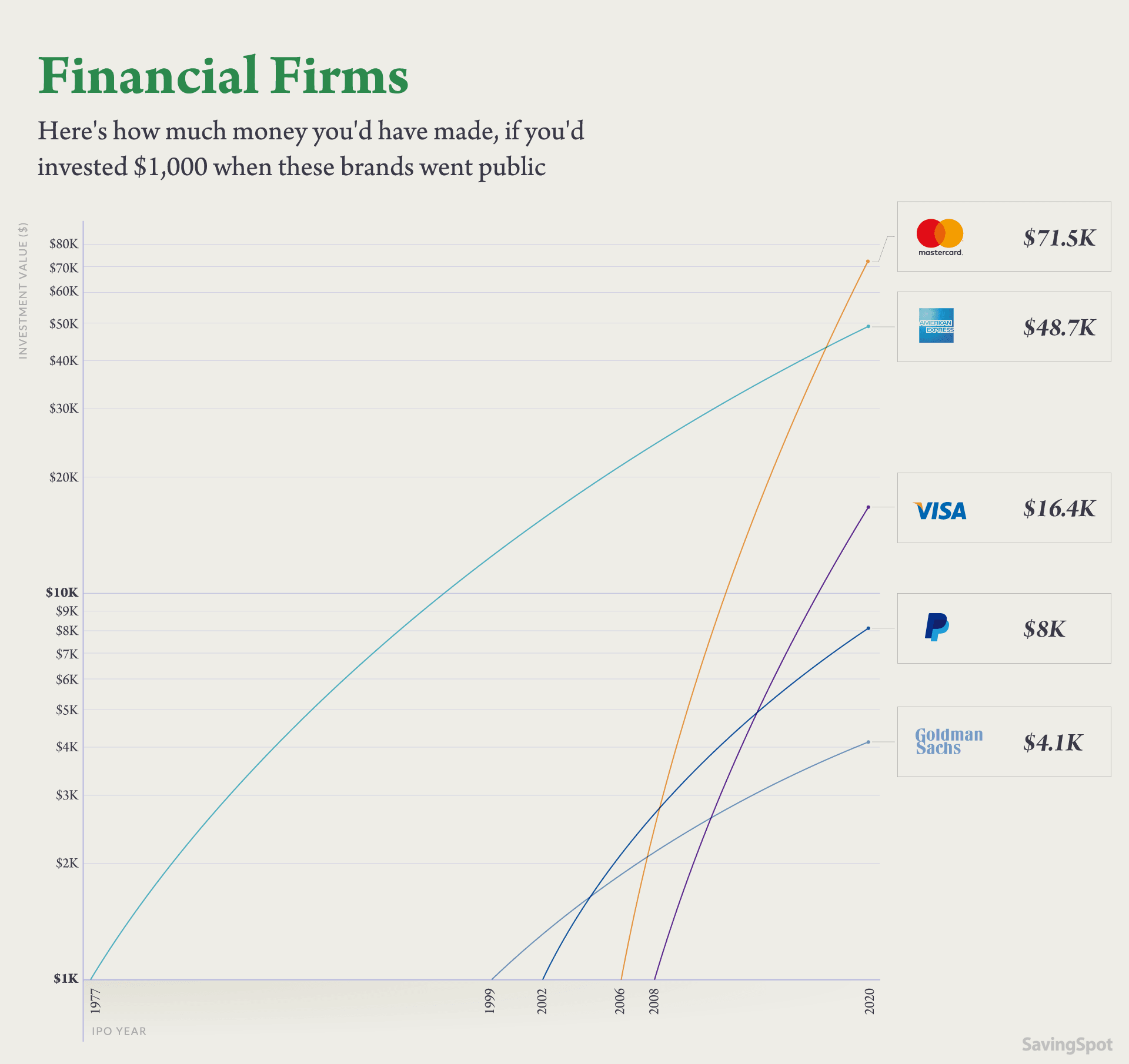 You might think there was a lot of money in finance, but while there’s some big returns here, they’re relatively small compared to some other industries. Still, Mastercard has certainly had a rapid rise in its value since an IPO in 2006, shooting up to $71.5k, compared to rival VISA which went public in 2008 and would only have given you $16.4k for your $1k. American Express meanwhile had its IPO in 1977 and has risen gradually to be worth $48.7k today. 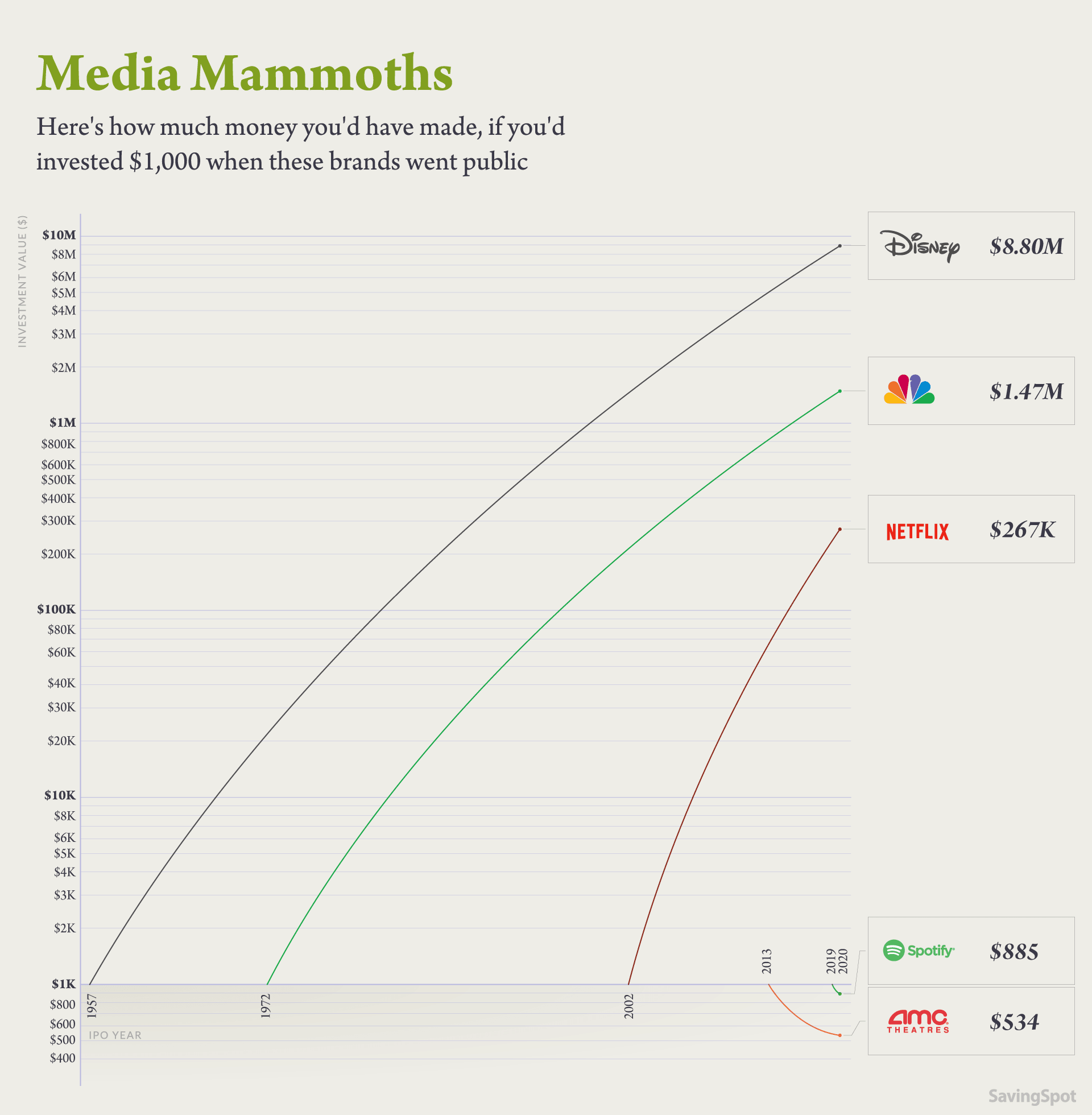 So far we’ve mentioned McDonalds, Apple and Coca-Cola, but there’s one company that has had an even bigger global impact that just keeps on growing. Disney was started in a garage and now owns the Marvel Cinematic Universe and Star Wars and The Simpsons and so much more, so if you’d invested $1k in 1957, that would be worth $8.80m today. Not all investments go in the right direction though, as investors in Spotify or AMC cinemas could explain. 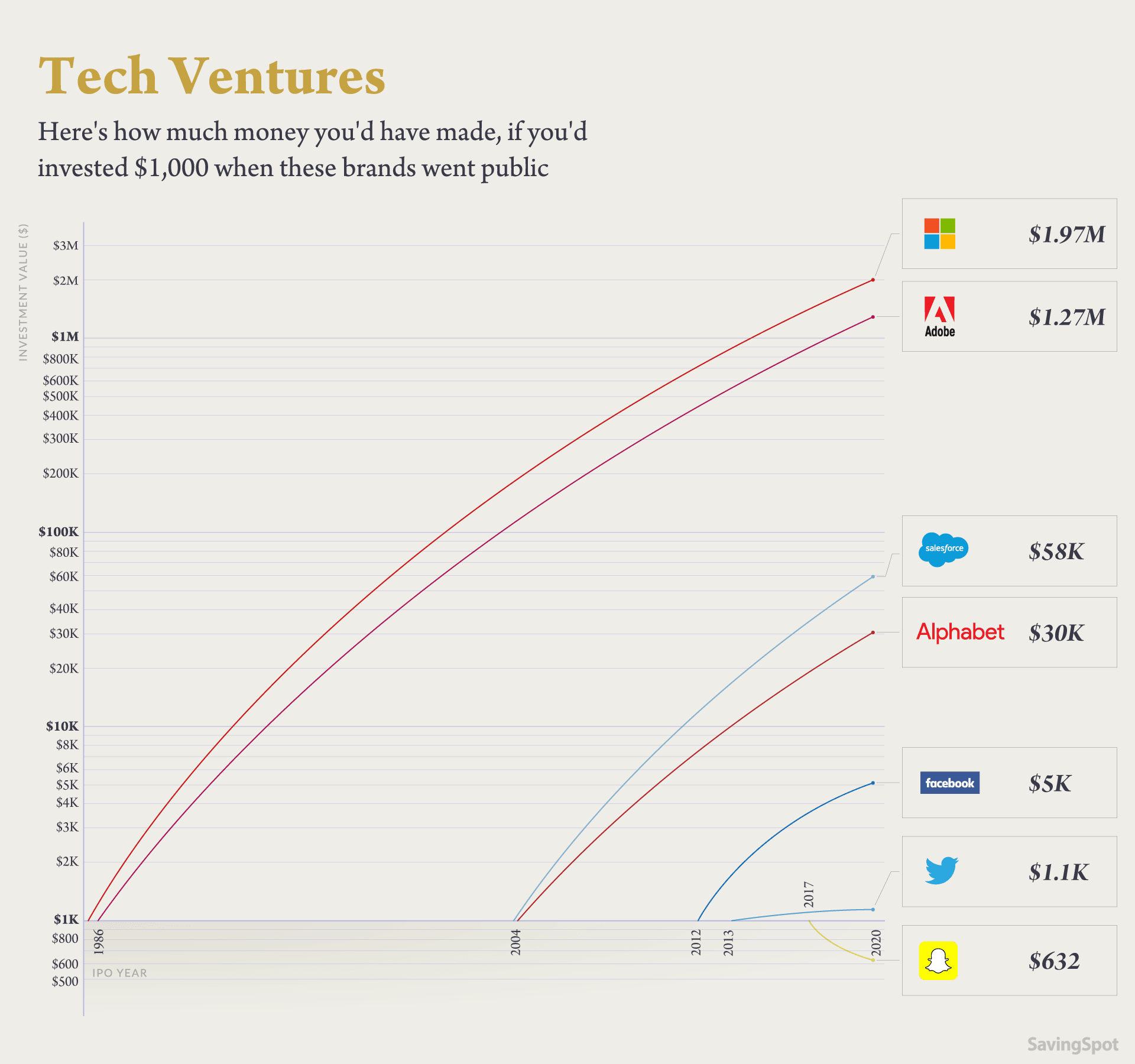 Another big American success story is Microsoft, which went public in 1986 and has skyrocketed in value to $1.97m, closely followed by Adobe, which had its IPO the same year and $1k from then would be worth $1.27m today. The social media giants have had less success though, with Twitter rising from $1k to $1.1k, while Snapchat has sunk to $632 since its IPO in 2017. 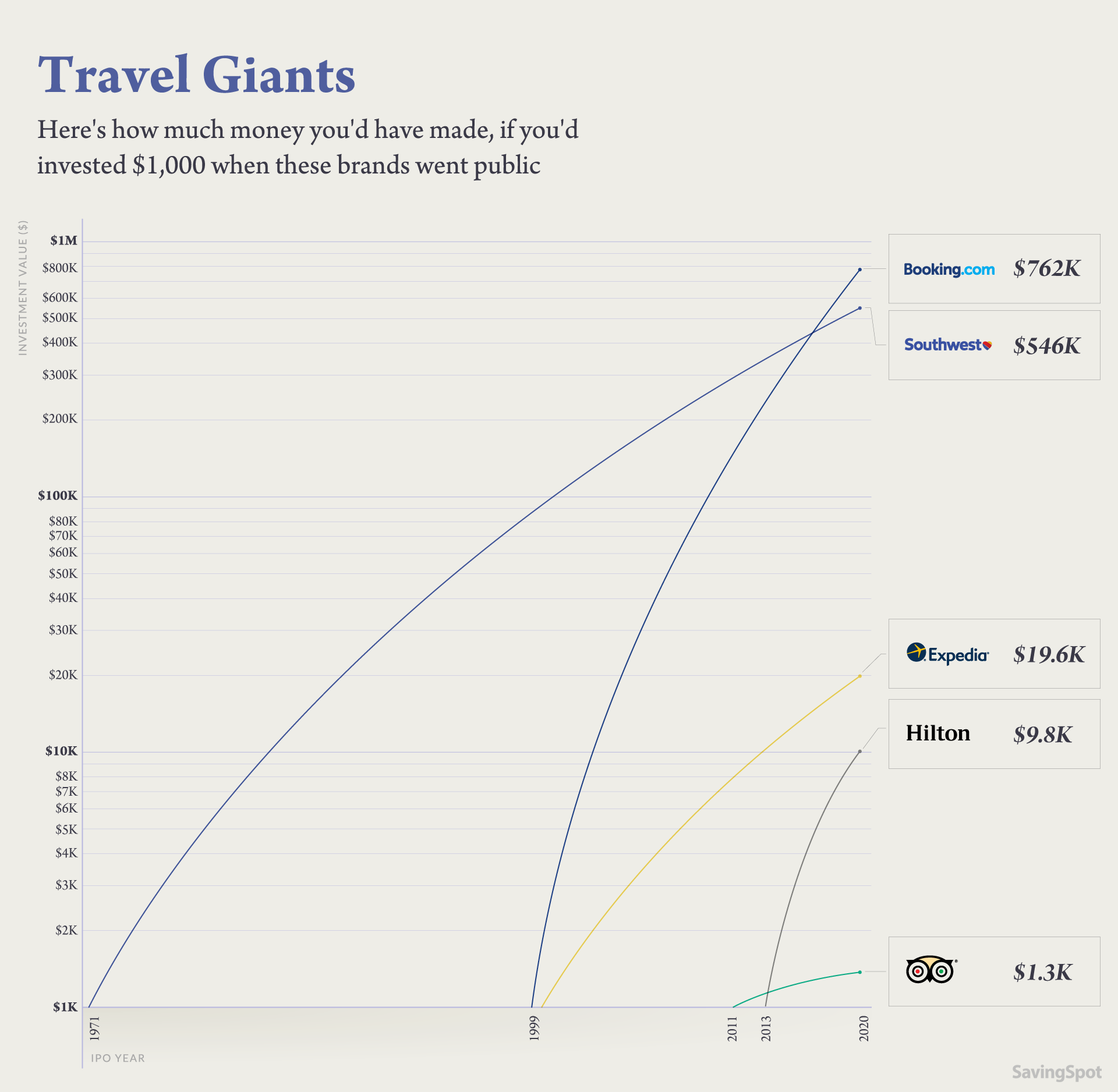 The travel industry has had its ups and downs, if you’ll pardon the pun, but the fortunes of Booking.com have certainly skyrocketed since its IPO as Priceline in 1999 and a $1k investment would be worth $762k today. Expedia went public the same year, but has struggled for the same growth, with that same investment there only worth $19.6k today. Tripadvisor meanwhile would probably receive a scathing review for the value of a $1k investment in it, which has only risen to $1.3k since 2011.

As you’ll have seen from these examples, getting in with your investment at the right time can have a potentially life-changing impact if you also choose the right company to invest in. Some of these businesses have changed the world and made their investors incredibly rich, while others have shown that hype doesn’t always deliver results. What companies do you have your investing eyes on right now?