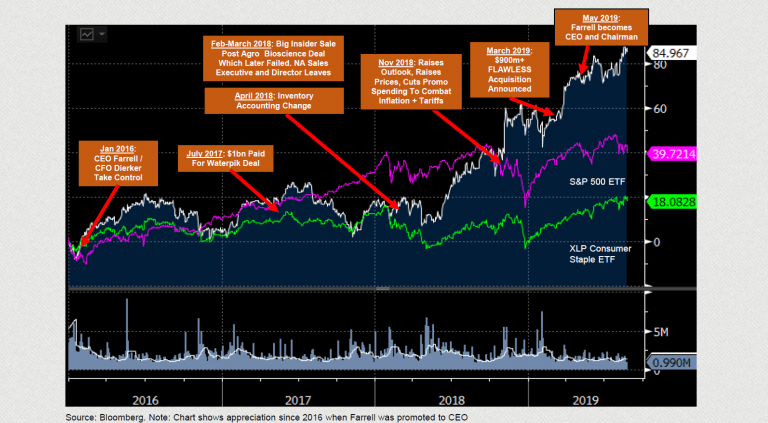 Spruce Point Capital Management, a respected short seller, published a lengthy report on an S&P 500 company called Church & Dwight, Inc. (CHD) this morning. CHD is seen by Wall St. analysts as a defensive consumer staples stock – they make Trojan condoms, Arm & Hammer products, OxiClean and WaterPik among others. The stock trades about 6% above average analyst estimates as investors have rotated into “defensive” sectors. But Spruce Point believes CHD’s management has has penetrated the stock portfolios of unsuspecting retail investors through relentless promotion.

Now a broadly owned megacap, Spruce Point believes new management has changed course and is using a variety of financial and accounting tactics designed to inflate and obscure its increasingly leveraged and decaying business. Spruce Point’s report shows how the current management team is fleecing investors with financial slightness-of-hand, while the Chief Accounting Officer (CAO) is covertly selling stock. Perhaps, the CAO is keenly aware that the current CEO oversaw a different company that issued a “non-reliance” statement on its financials.

Spruce Point also uses a unique data set to show that management appears to be exaggerating the performance of its recent acquisition, and why the acquisition is already failing miserably.

Some additional info is below.

Church & Dwight Co., Inc. - "Arm Yourself To Get Hammered"

Spruce Point is pleased to issue a unique investment research opinion on Church & Dwight ( "CHD" or "the Company"), an S&P 500 company, and roll-up acquiror of personal care and consumer products. Under its older leadership, management pursued a conservative strategy to leverage its core Arm & Hammer brand by diversifying and integrating acquisitions, while still prioritizing product innovation, and manufacturing excellence.

With the elevation of Matt Farrell to CEO in 2016, Spruce Point believes CHD’s strategy has pivoted towards extreme financial engineering, aggressive accounting, and managerial self-enrichment practices. As fundamentals deteriorate in CHD’s retail environment, and it’s now clear that 60% of its legacy Power Brand acquisitions are failing, Spruce Point believes that CHD’s recent Waterpik and FLAWLESS levered acquisitions were made in desperation at outlandish valuations, and with financial and accounting control problems that will disappointment investors. With CHD’s shares at a 8% premium to average analyst price targets, and debt rising, investors seeking safety in CHD’s stock face 35%–50% downside risk ($42 - $50/sh).