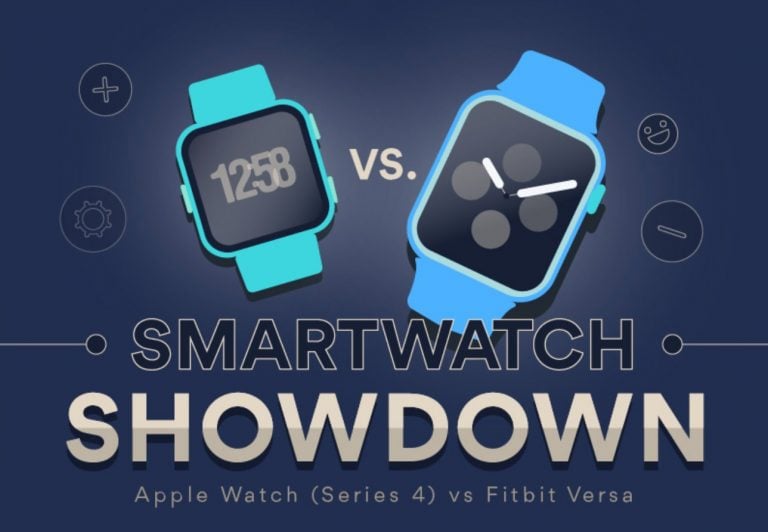 Any discussion of smartwatch devices would be incomplete without mentioning two of the hottest gadgets on the market: Apple Watch Series 4 and Fitbit Versa. Since each of these watches comes with their own set of advantages and disadvantages, we’ve decided to create a comprehensive comparison of the two and hopefully help you decide which one is the right watch for you.

First and foremost, let’s talk price. When it comes to affordability, Versa is the obvious winner. While this smartwatch retails at $169.99, Apple’s Series 4 will cost you $399 for the 40 mm case or $429 for the slightly larger, 44mm one. However, the higher price of Apple’s latest smartwatch is more than justified once you take into consideration its wide range of features and premium build materials.

Apple Watch Series 4 also comes on top in the sales cycle category since the tech giant updates their smartwatch line frequently (averaging a new release once a year) and offers different trade-in plans that make it easier to get the latest watch in the series.

Beware though: if you need a watch that supports both Android and iOS, Apple Series 4 is not the right choice for you. While Fitbit Versa supports both operative systems, users of Apple watches remain locked to the iPhone, which leaves large numbers of prospective Android users out of reach for Apple.

Apple Watch Series 4, however, wins the battle of customization hands down. Although both Apple Watch Series 4 and Fitbit Versa can be customized digitally and also with the help of interchangeable watch bands, the owners of Apple's smartwatch can treat themselves to even more highly customizable watch faces directly from Apple. But that's not all! Apple also has a variety of official watchbands available for purchase, as well as an assortment of third party watch straps.

To find out more about how Apple Watch Series 4 and Fitbit Versa fare against each other in different categories, check out the detailed infographic below by The Watchstrap.co!