“Hidden assets” in many cases are the source of considerable value creation. And, sometimes, the asset and its value are not so much hidden as simply viewed through a different lens. The following story will provide an example:

In the early 1970’s, Diamond International Inc. began a program of diversification ostensibly to attempt to break its dependency on consumer spending cycles. The company began its life in the 19th century and introduced the safety match to America in 1882. However, the Diamond of the latter part of the 70’s held little resemblance to its origins. The board and CEO of Diamond believed that the diversification program was sound and did little to question its efficacy. What they saw was a company, which as a member of the Fortune 500, was well established and solid which was the extent of their view even though profits had stalled and the share price had been stagnant for a significant period of time.

In 1979, Jimmy Goldsmith, the Anglo-French corporate raider began to build a position in Diamond International. Goldsmith’s view of the company was quite different from that of Diamond’s board and management. What Goldsmith saw was a company that was horribly managed and that was comprised of a hodge-podge of materially undervalued assets. And hidden the midst of this conglomeration was an asset that had been on the books since the late 19th century and was carried on the Diamond balance sheet at its original value of $27 million: 1.6 million acres of timberland.

After fighting a series of battles (amazing that boards and managements so often fight to remain mediocre), Goldsmith was finally able to acquire Diamond, paying a premium to Diamond’s shareholders. Once fully in his possession, he started taking the steps that would realize the full value, that he had perceived, of the Diamond assets. He quickly sold off the various operating companies with the 1.6 million acres of timberland the only asset of Diamond remaining in his possession. After completely retiring the substantial debt incurred to acquire all of the shares of Diamond, he had made a profit in excess of $500 Million.

Fortune magazine said that the Diamond transaction was one of the financial events of the 1980’s. It was also one of the most profitable during that decade of many successful deals. Predictable however, was the overwhelming criticism of Goldsmith as an “asset stripper” and other less than flattering monikers. Yet, nothing could have been further from the truth. Expanding the concept of maximizing asset values even further, it is clear from the following results of the operations that were sold that assets were not “stripped” but instead were liberated:

The shareholders of Diamond received a premium for their shares. Jimmy Goldsmith, after retiring all debt made over $500 Million and all of the operations sold quickly improved in performance and thus, value, now that they were liberated from the stifling bureaucracy of Diamond. Increased value and performance accrue on three different levels. This really begs the question as to why Diamond’s board and management did not see the hidden values that Sir James Goldsmith saw.

The Goldsmith/Diamond story is one of extremes in regard to hidden and undervalued assets. Yet it does provide a clear example of how shifting the perception of an asset or assets can shed light on significant value previously not seen or actualized. And, in that regard, I believe that there is a similar hidden/undervalued situation in an arena not typically even considered to be an asset: Public Company Boards.

To really zero in on the thesis that public company boards are undervalued assets we have to delve into the governance model as opposed to individual boards. The current public company governance model is far from conducive to realizing the full asset value of a board. It is the model itself that is the underlying inhibitor of the full performance and asset value realization. And while there is constant effort made to improve public company boards, no action is ever targeted toward actually deeply analyzing and radically changing the model.

The following chart provides a high level look at the differences in the public company and private equity governance models: 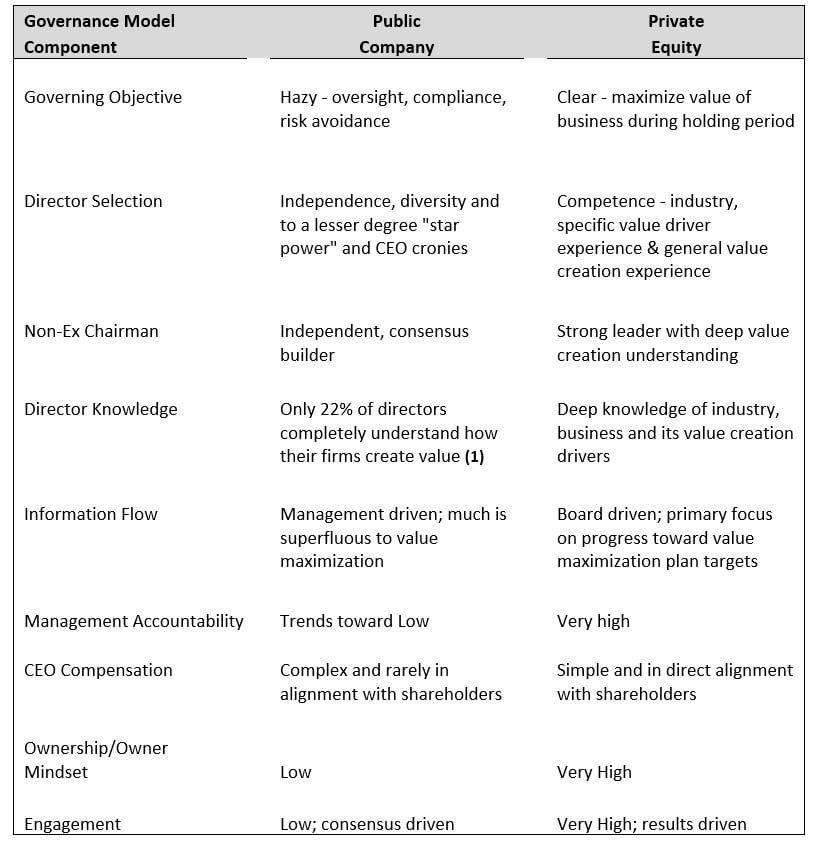 From the above chart it is abundantly evident that in the context of performance and value creation, the private equity governance model is superior. In fact, a survey by McKinsey of chairmen and CEOs who had served on both public and private equity boards found: (2)

The operative thesis here is that the private equity governance model provides the light that can be shined on the public company governance model revealing its current state of underperformance yet at the same time the potential hidden asset value that exists. And, the key to the realization of this full asset value is to approximate the private equity model at public companies. Just as Jimmy Goldsmith radically altered the structure of what was initially an ossified Diamond International in order to liberate the full value of its assets, the bureaucratic public company governance model also needs to be radically altered for boards to reach their full potential and thus drive the development of the full potential and value of the company.

So, what does a radically altered public company governance model look like? As is discussed in detail in my book Governance Arbitrage: Blowing Up the Public Company Governance Model to Maximize Long Term Shareholder Value, the following are some of the components and characteristics of what I will call a Value Maximization Model for public companies:

When what is typically considered to be assets are undervalued and the right change catalyst appears value can be maximized. The same concept and process is applicable to the public company boards – a shift to a value maximization model can, and likely will, create a governance arbitrage.