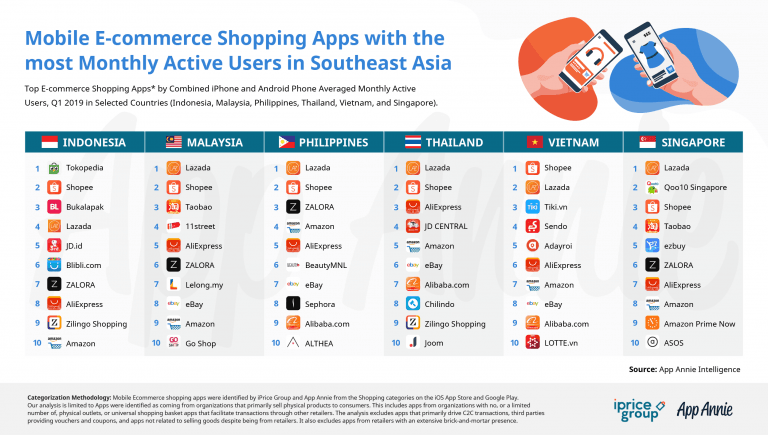 Mobile applications today play a vital role in the development of e-commerce. According to a report by Google & Temasek, there are more than 350 million internet users in Southeast Asia (Indonesia, Malaysia, Philippines, Singapore, Thailand, and Vietnam).

More importantly, more than 90% of Southeast Asians connects to the internet primarily through mobile devices. This figure is expected to rise as smartphones become more accessible and the rapid improvements of faster and more reliable mobile telecommunication services.

In addition to this, the same report by Google & Temasek stated that the internet economy will rapidly grow to become a US$240 billion industry with e-commerce as a key driving force and is estimated to garner as much as US$102 billion by the year 2025.

Lazada’s mobile shopping application garnered the highest average MAU in the Philippines, Malaysia, Thailand, and Singapore. The Alibaba-backed e-commerce was amongst the top apps as well in Vietnam and Indonesia, ranking second and fourth respectively. 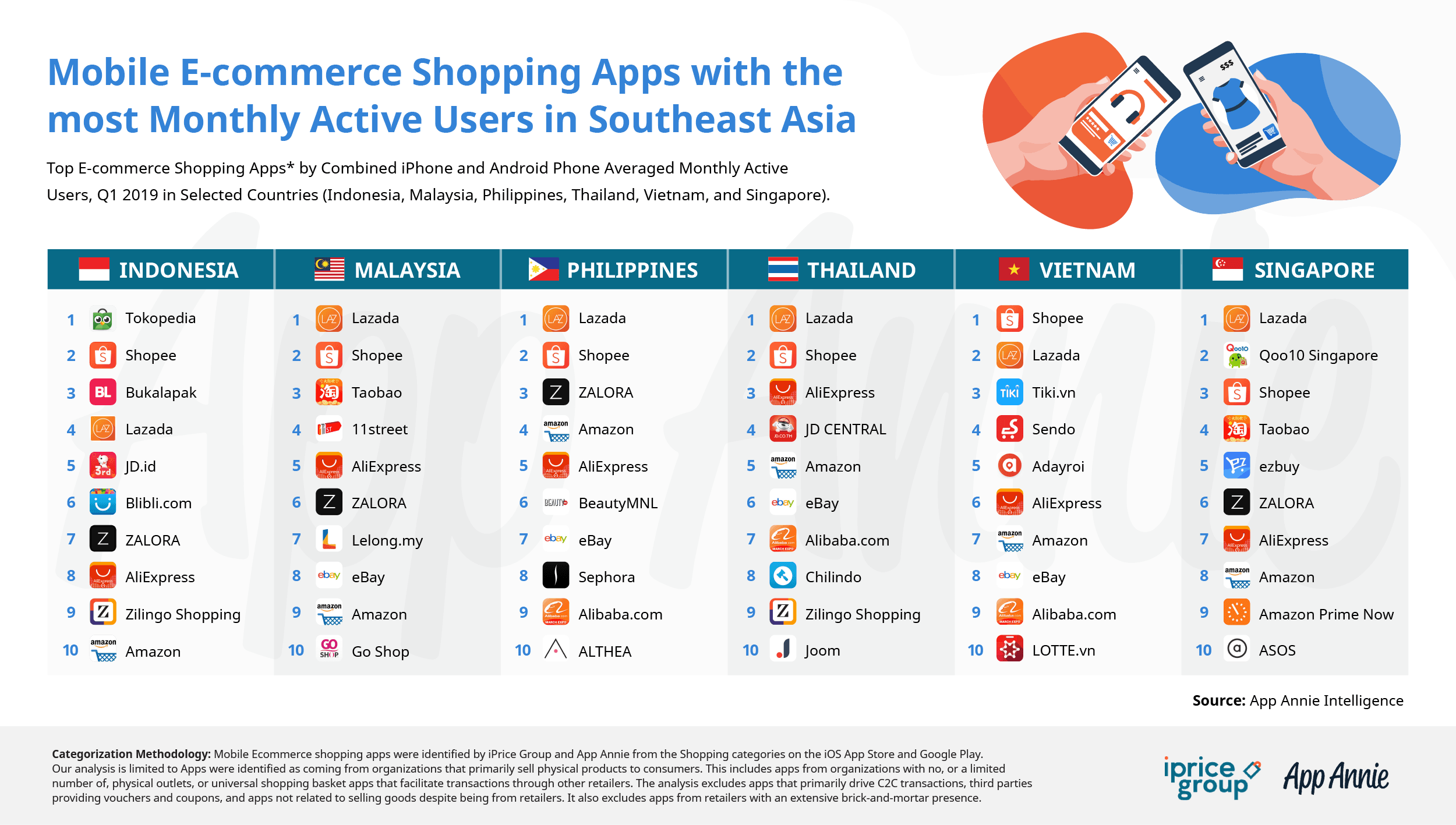 In the past year, Lazada has put significant focus in the development of its application to engage tech-savvy consumers and serving their constantly evolving habits. Among the many new features introduced was an in-app livestreaming function and Image Search feature where Lazada claims that 500,000 customers utilise daily to find some 20 million products, and the ‘Shake It’ in-app game.

Its closest competitor in the region would be Shopee, ranking highest in Vietnam, second place in Indonesia, Philippines, Malaysia, and Thailand, and third place in Singapore.

Also aware of the importance of mobile apps in the region, Shopee in the past year prioritised a ‘hyper-localised’ user experience approach by having a different app for each country. This was part of their strategy to focus on taking a highly localised approach to each market. This has been an effective strategy as Shopee remains as one of the youngest players amongst the top apps, quickly rising through the ranks since its founding in 2015.

Another prominent competitor was Tokopedia who ranks highest in average MAU in Indonesia. Tokopedia remains a prominent player as the company currently holds the biggest market share in SEA’s largest country in terms of population. Last year, Tokopedia was the third most visited e-commerce platform in SEA although it was only available in a single country, with an average 125 million visitors in 2018.

Across the six countries analysed, Chinese and American e-commerce mobile apps remained popular and were actively used in the region with apps such as AliExpress, Amazon, eBay, TaoBao, and Alibaba.com.

In SEA, Amazon officially launched its services in Singapore in 2017 with Amazon Prime Now and currently ranks ninth place in the list of monthly actively used mobile shopping apps in the city-state. In other countries, Amazon remains as a prominent e-commerce app in Thailand and Vietnam, ranking fifth and seventh place respectively.

In SEA, Tokopedia was the only e-commerce mobile application which was most actively used in its home country. Recently, the Indonesian e-commerce recently received US$1 billion from existing investors, making it the most valuable startup in the country.

According to Bloomberg, William Tanuwijaya, the co-founder of Tokopedia capitalized on the country’s rapid adoption of smartphones and increasing comfort in shopping online. As such, Tokopedia leads in the mobile shopping sector as well as on desktop with the most visitors in its home country Indonesia.

Other e-commerce apps which performed well in its home-country were Qoo10 (second place in Singapore), Tiki (third place in Vietnam), and 11street (fourth place in Malaysia).

Although mobile applications are an important aspect of e-commerce, e-commerce websites remain relevant to consumers as well. A study on the State of E-commerce in Southeast Asia noted that consumers were more likely to conduct purchases via desktops as compared to mobile. 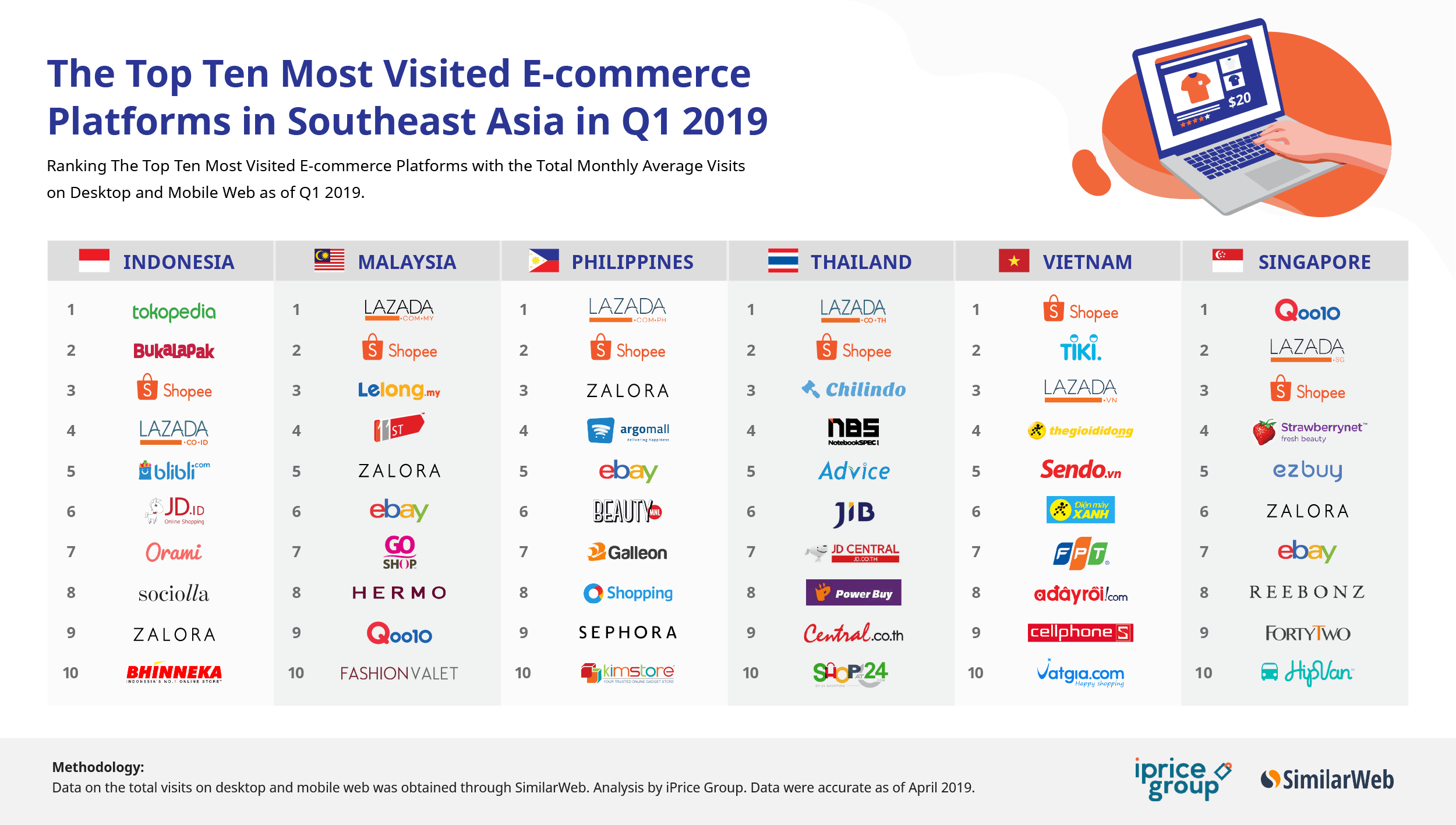 Key findings on the most visited e-commerce platforms on desktop and mobile web:

About App Annie
App Annie delivers the most trusted app market data and insights for your business to succeed in the global app economy. Over 1 million registered members rely on App Annie to better understand the app market, their businesses and the opportunities around them. The company is headquartered in San Francisco with 450 employees across 15 global offices. App Annie has received $157 million in financing, including from investors such as Sequoia Capital, Institutional Venture Partners, IDG Capital Partners, e.ventures, Greenspring Associates, and Greycroft Partners.