How does the new Google Pixel 3a stack up against Huawei P30 Lite? And which one is better value for money? Let’s find out.

The Pixel 3a lacks any kind of IP rating for water resistance, though it does come with splash and dust resistance. It retains the 3.5mm headphone jack and uses USB-C port for charging. Google has launched the Pixel 3a in Just Black, Clearly White, and Purplish color options.

The Huawei P30 Lite has a much more premium design with a dot-notch display and a thin chin at the bottom of the screen. Its rear panel has a circular fingerprint reader and a vertically aligned triple camera setup. Just like Pixel 3a, it features a 3.5mm audio jack and a USB-C port for charging. This too lacks water resistance.

The P30 Lite measures 152.9 x 72.7 x 7.4 mm and weighs 159g. Its rear panel appears to be made out of durable plastic. Huawei has launched it in Midnight Black, Pearl White, and Peacock Blue color options.

The Pixel 3a has a smaller but better display than the P30 Lite. Google has used a 5.6-inch gOLED display with Full HD+ resolution of 2280 x 1080 pixels and an 18.5:9 aspect ratio. The OLED panels are superior to their LCD counterparts, delivering more vibrant colors. The Pixel 3a uses Asahi’s Dragon Trail Glass instead of Corning Gorilla Glass for protection. Thanks to thick bezels, it has a relatively lower 75% screen-to-body ratio.

In contrast, the P30 Lite sports a 6.15-inch IPS LCD screen with Full HD+ resolution of 2312 x 1080 pixels. It has an impressive 84.2% screen-to-body ratio and 415ppi of pixel density. Though its display isn’t OLED, it’s good enough to offer an immersive experience when playing games or watching videos.

Both handsets have mid-range specs, and they both are good enough for day-to-day tasks as well as gaming. The Pixel 3a runs Qualcomm’s Snapdragon 670 processor with Adreno 615 graphics processor. It packs 4GB RAM and 64GB of storage. The device lacks a microSD card slot for external storage. Google offers unlimited free cloud storage of photos and videos via Google Photos, but not in their original resolution.

Google’s software optimization ensures a smooth performance and experience on Pixel 3a. It runs the stock version of Android 9 Pie, bringing features like call screening that lets Google Assistant handle spam calls for you. In contrast, the Huawei P30 Lite runs the company’s custom EMUI 9.0 skin on top of Android 9 Pie.

The P30 Lite runs Huawei’s custom HiSilicon Kirin 710 mid-range processor paired with Mali-G51 graphics processor. It is available in two RAM options of 4GB and 6GB, both of which have the same 128GB storage. The 6GB RAM variant is available only in a few countries such as the Philippines.

Huawei’s device supports external storage of up to 512GB via a microSD card slot. It has a 3340mAh battery with 18W fast charging support. Just like Pixel 3a, it lacks wireless charging support.

Premium devices from both Google and Huawei are among the best smartphone cameras. On Pixel 3a, Google has used the same camera as the premium Pixel 3. So, you can expect the same world-class photography on the new phone. It sports a single 12.2MP Lens on the back with OIS, EIS, and f/1.8 aperture. On the front, it has an 8MP selfie camera with f/2.0 aperture.

The P30 Lite has one of the best cameras on mid-range smartphones. It sports a triple camera setup on the back. It gets a 24MP primary lens with f/1.8 aperture, an 8MP ultra-wide angle lens and a 2MP depth sensor for portrait images with blurred backgrounds. Its camera features Night Mode, Pro Mode, Portrait Mode, HDR, and Time-lapse photography. For selfies, it has a 32MP camera with HDR support and f/2.0 aperture.

Huawei’s device isn’t available in the United States due to allegations that it’s spying on behalf of Beijing. It’s available in Canada for CAD 430 for the 4GB+128GB version, which is equivalent to $320 in the US. In the UK, it costs £329 for the base model. You can pick it up from O2, Vodafone or through online retailers like Amazon and Argos. 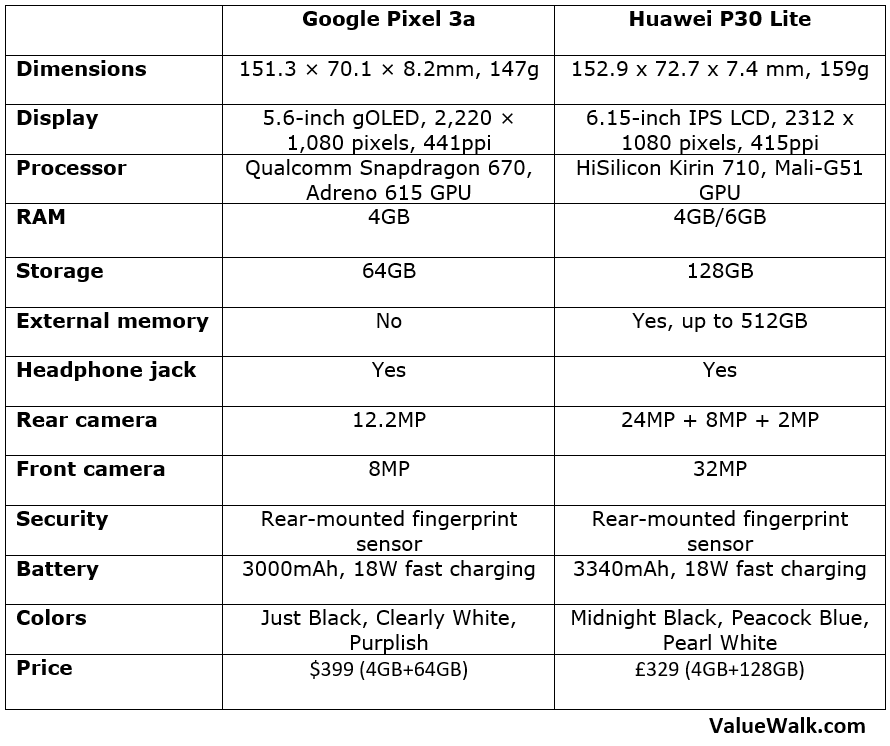