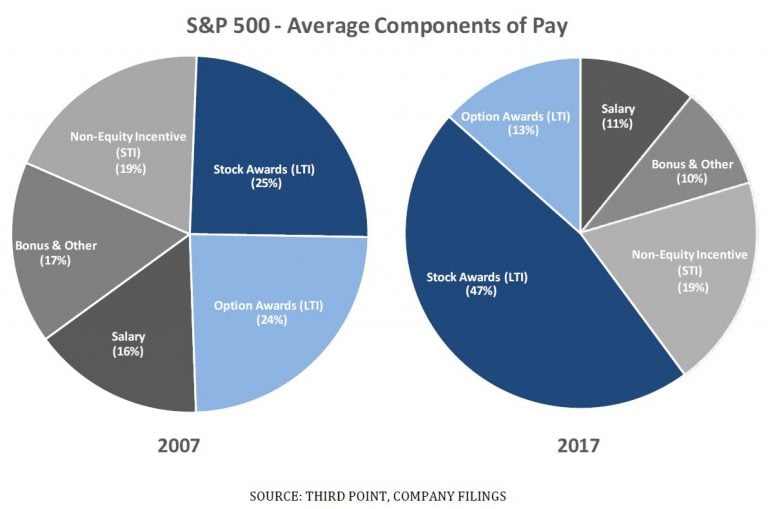 Third Point’s Offshore Fund gained 8.8%1 during the First Quarter of 2019. Returns were driven by strong performance in several activist and constructivist positions including Nestlé (+18.9%), Baxter (+23.8%), United Technologies (+21.7%), and Campbell (+16.7%). Single name shorts and hedges detracted from performance, while structured and corporate credit made a small positive contribution.

By the end of the First Quarter, equity markets had mostly bounced back from Q4 2018’s sharp decline. The dovish shift in Fed policy – which over the last six months went from a three to a zero-hike baseline for 2019 and accelerated the end of its balance sheet runoff – has primarily driven the rally. With this shift now arguably reflected in asset prices, further equity uplift likely will come from improving global growth or re-positioning. The balance of evidence today suggests a rise from these levels: global manufacturing PMI has fully retraced its rise from early 2016 to its peak in late 2017; US consumer fundamentals like real labor income and the consumer saving rate are strong; and renewed stimulus and a near-term trade deal with the US are positive for China. Better Chinese growth should help the Euro Area and eventually, the US. The case for a gradual acceleration of US growth is straightforward: the current drag from financial conditions is at its peak and should offset waning fiscal stimulus. Improving growth should boost cyclicals, which have recaptured little of their relative decline since mid-2018.

A key issue is the durability of the Fed's shift. Despite evidence of a tight labor market, core inflation has remained low, and rates markets are predicting that the Fed will remain on hold for at least this year. The range of outcomes for the Fed Funds rate is wide. If US growth fails to pick up, signaling heightened recession risk, the Fed could cut swiftly. On the other hand, markets could price in a return to hikes if we see above-trend growth coupled with core inflation moving towards its target and an unemployment rate resuming its decline towards a 50-year low after a temporary rise in participation. What the consensus may be missing here is that a patient stance by the Fed, which means fewer hikes now, may mean more hikes later. Outside of Fed policy and direction, we are closely monitoring the impact of trade negotiations and their related effects on inventory builds, input costs, tax refunds, and European economic conditions.

The Value of Good Governance

Since 2000, Third Point has engaged in 45 active or constructive investments, won 24 board seats, and favorably resolved each of the nine proxy contests we initiated. This strategy has generated a +21% annualized return since 2011, when we resumed activist investing after several years where our attention was focused primarily on credit securities, with cumulative returns for the same period in excess of +300%.2 Today, such investments make up approximately 40% of fund exposure. We believe that our track record and process for making successful activist and constructivist investments provide us with a competitive edge in financial markets.

We typically engage in conversations with the management teams of companies in our portfolio. Much of this dialogue is simply part of our due diligence process, where the purpose is to gain a better understanding of a company and its prospects. Sometimes, we see discrepancies between a company and its competitors in areas like growth rates, margins, or capital allocation practices. Most management teams are aware of where they are falling behind and work toward closing these gaps.

In a small number of companies, management teams seem satisfied with the status quo and are unwilling or unable to make changes. There are many reasons for such recalcitrance: sometimes the CEO’s incentives are misaligned with shareholders because of an incentive plan based on revenue growth irrespective of returns; or a CEO is most interested in status and perquisites, or most enjoys hobnobbing on the world stage in Davos or pontificating on TV; while some CEOs may simply find themselves in over their heads and without the managerial skills to effectuate change and improvement. In all these cases, the company’s board must be held accountable for allowing such antics to persist.

Boards of poorly performing companies have their own reasons for inaction but generally they can be traced back to a lack of alignment of interests with shareholders or incompetence. Few board members have much “skin in the game,” having been awarded free stock and a nice stipend simply for joining the board. As a result, they often make decisions to preserve their status and income stream rather than to drive shareholder value. Most directors have little actual experience in capital allocation yet are asked to make decisions on the topic at virtually every board meeting.

Each activist investment we engage in begins as constructive and many end there, with collaborative idea-sharing with management. As a result of our discussions, we sometimes learn that our ideas are impractical; sometimes, management adopts some of our suggestions; and sometimes, we can agree to disagree on a few points if we feel the company is moving in the right direction. We always prefer diplomacy over conflict and do our best to remain behind the scenes. Occasionally, however, we are left no choice when a CEO is inept, or a board is unwilling to fulfill its fiduciary duty to shareholders. In such cases, we take steps to influence the board and key decisions around strategy or capital allocation.

Fundamental to our activist approach is the system of public company ownership, founded on principles of shareholder democracy and rooted in securities laws designed to protect owner’s rights, which holds management teams and board members accountable to shareholders. Each activist investment is an opportunity for value creation driven in part by improved governance and advocacy for shareholder rights.

Our guiding principles of activist investing are: 1) every activist campaign is predicated on thorough research, strong fundamentals, and asymmetric outcomes with very limited downside if we are unable to make the change we seek; 2) we only engage in activism where the activity is aligned with creating long-term value for the company; 3) our engagement must improve each measure of the targeted company’s value algorithm, positively impacting growth, margins, and return on capital and thus, the company’s valuation; and 4) improving governance is not just a talking point, but a means to meaningfully improve a company’s trajectory.

Based on our hard-won belief that governance matters, we are currently developing methods to systematize our governance practice, including by adding data analytics to our research process. An example of an important governance-related metric is CEO pay. Performance-based incentives now account for greater than 60% of CEO take-home pay and closely studying how boards remunerate their management teams through short, but especially long-term, compensation is key. 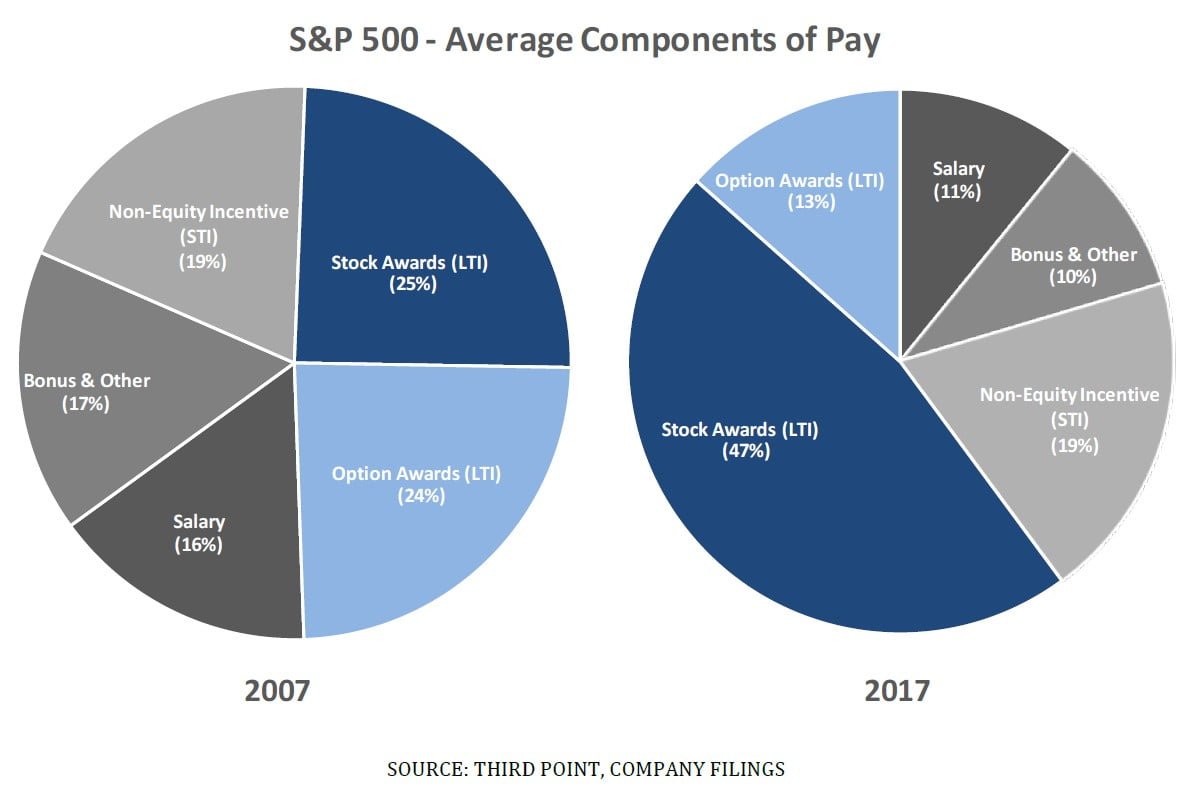 A focus on financial returns (e.g. ROIC, ROCE) is what we look for in the long-term incentive plans (“LTIPs”) of management. LTIPs have become increasingly core to many large US companies, however, not all LTIPs are created equal. Our analysis shows a material difference in excess annual stock price performance over a rolling medium-term horizon (e.g. three years) when the focus in LTIPs includes a form of Return of Capital metric versus other incentives like Total Shareholder Return (“TSR”) (+150 bps), EPS (+180bps), and revenue targeting (+215bps). Among others, we also look at factors like: a) the amount of stock owned by the CEO and, if holdings are substantial, whether TSRs become double counted; b) if TSR is an incentive metric, is R&D or Capex spending stunted?; and, c) will a management team paid on ROE be more likely to buy stock than one tied to TSR, who would rather issue a dividend?

Whether as passive investors in high-quality companies or activists in companies that can improve, we want corporate management to solve for value creation, not security price. We believe certain governance factors and incentives are useful to evaluate management skill and thus, company quality. More carefully and systematically studying governance is giving us a new analytical lens and validating our conviction that good governance makes good companies, and vice versa.

We are pleased to welcome Chris Rich as Head of Capital Markets, where he will lead coverage of new and follow-on issuances and work with our team to invest passively in high-quality companies early in their lifecycle.