At Crescat we remain positioned to capitalize on a downturn in the economic cycle. Global equity markets peaked in January 2018 while US markets peaked in September 2018. Crescat’s hedge funds were two of the world’s top performing funds in 2018 as a result of our bearish macro views and positioning last year. We are confident that was only the beginning of a downturn in asset prices from record global leverage and central-bank-driven asset bubbles for this cycle. US asset bubbles only just began to burst at the end of last year as on can see in the chart below. 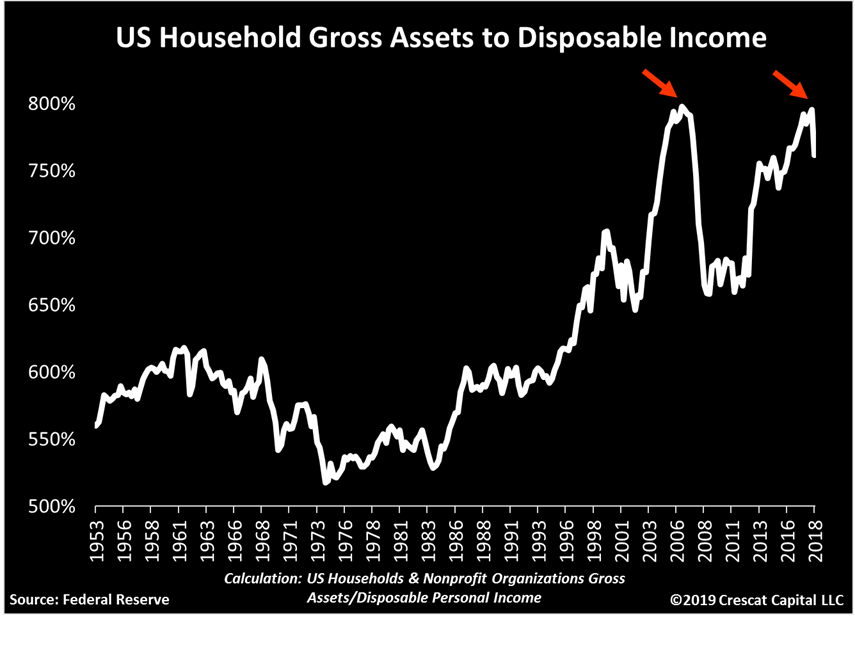 Year to date, global stocks and corporate credit have rallied back while economic indicators have continued to deteriorate. This is setting the market up for another down-leg. We haven’t even had a recession yet and US stocks are still near record valuations across a breadth of measures. There is tremendous shorting opportunity ahead! With the current quarter, we are now in a tie with the 1990s for the longest US economic expansion ever. Our macro models based on an abundance of indicators show that the expansion is about to turn into recession within the next several quarters.
This Top Value Hedge Fund Is Killing It This Year So Far

How do we get to a recession? US stock market and corporate credit bubble must burst first. That is how the business cycle works. It started in the fourth quarter, but that was only the beginning. How do bubbles burst? The smart money sells first from record valuations, then the rest of the world follows. Note in the chart below how insiders began selling heavily in early 2017. But the rest of the world did not follow. The stock market kept going higher. So, they sold again in early 2018. That time, the stock market finally began to falter. Global stocks peaked and kept going down. But the US market went to new highs again in September 2018. Now insiders are selling heavily again in early 2019. The third time should be the charm.

……………..
However, on a risk-adjusted basis, we are attempting to do better than this model. We arebalancing and managing our overall exposure with a conditional value-at-risk model.
We arealso going for high alpha versus the indices through individual stock selection.
In gold bullmarkets, silver tends to perform even better than gold, and gold and silver stocks do evenbetter than gold. We currently own them all, including gold at the core.
On the short side, ourequity model helps us select individual stocks that can deliver more alpha than shorting themsci world index alone. We currently have index and etf short exposure in addition toindividual stocks in our hedge fund portfolios. The shorting opportunity is best when one is early in the process as our returns in 2006 and2007 from the peak of the housing bubble prove.
Our performance last year demonstrates it as well. But it is likely only the beginning of a global macroeconomic downturn!
Soon the buy-the-dip mentality and bull-market greed will turn to fear. Selling will beget moreselling. That’s how bear markets work.
There is so much more ahead to profit from the shortside of the market.
The bear-market rally is running out of steam!
We believe it is a great time to invest in crescat’s hedge funds after our pullback year to dategiven our steadfast net short positioning that we intend to maintain until a us recession iswidely acknowledged. We remain tactically net short global equities near the likely top of an economic cycle.
The downturn is likely to be led by a china currency and credit crisis with us stocks also falling from historic valuations after a record-long business cycle. We are determined to prudently position and profit for our clients.
Download The Full Letter in PDF Form