When you think of investment you’re much more likely to think of a suited businessman sat with a briefcase as he eyes up the stock market and invests into a commodity such as oil. However, as Bitcoin fever has rapidly spread across the globe, Bitcoin has birthed a whole new generation of investors ranging from upper-class moguls to the everyday office worker.

It’s a well known fact that digital currency is one of the riskiest investments. The volatility of the cryptocurrency market often means that investors can see a coin soar one day before plummeting the next. Despite this, the risk vs reward is overlooked for some that hope to rake in the profits, but how do cryptocurrencies compare against traditional investments?

Over the past year, traditional investment options such as commodities have actually seen a drop in value per unit. For example, coffee has seen a dip of -20% between September 2017 and September 2018 and in the same time frame, copper dipped by -12% closely followed by gold which dropped -10%.

But it’s not all bad news, as commodities have dropped in value, cryptocurrency has seen a boom in worth over the previous year. In particular, EOS saw a 786% increase in value rising from $0.73 per unit to $6.47 per unit. Though this level of growth may not surprise cryptocurrency experts, traditional investments pale in comparison.

So how do you know what to invest in? Read on to find out…

Ethereum set to be the most lucrative investment

Do you want to go from being a stock market dreamer to a high earner? A new tool could be what you need to transform your hindsight into insight.

How Rich Would You Be? uses market data from the past 12 months to reveal exactly what you could have made if you invested in a variety of cryptocurrencies, commodities and companies. It also forecasts the potential gains for each over the coming months to predict the next big investment opportunity.

Via a bespoke algorithm that uses machine learning, the tool feeds historical data on all 15 options through a recurrent neural network to unveil the future rise and fall in value for each investment.

The 15 commodities monitored within the piece include:Bitcoin

All data is displayed in concise visualisations, allowing you to compare individual or multiple investments side-by-side.

The future predictions reveal that the cryptocurrencies will experience the highest percentage increase, yielding more profit than commodities or companies.

The algorithm also reveals that the value of Ethereum will skyrocket from $289.26 per unit to $788.42 if it continues on its predicted path - an astounding 173% increase by October 28th.

Similarly, Ripple investors should look forward to the next month since the cryptocurrency is charted to rise in value by 159% - surging from $0.34 per unit to $0.88 per unit.

Despite the unpredictability of the cryptocurrency market, the historical data shows that when compared against commodity and company investments, EOS, Bitcoin and Ripple boasted three of the top five investments.

Though it is now set to undergo a negative percentage change, Amazon experienced a 106% increase in value per share between September 2017 and September 2018.

Unfortunately for commodity investors, the two investments that have made the biggest losses over the past year include coffee and copper. Coffee has made the most significant loss over the last year, with a -20% change - dropping from $129.65 per pound to $1103.33.

Copper investors will also have been disappointed with the -12% change in value over the previous year from $3.06 per pound to $2.68.

Commodity investors who chose to invest in oil over copper would have enjoyed a 46% rise from $48.07 per barrel to $69.97 in just one year. 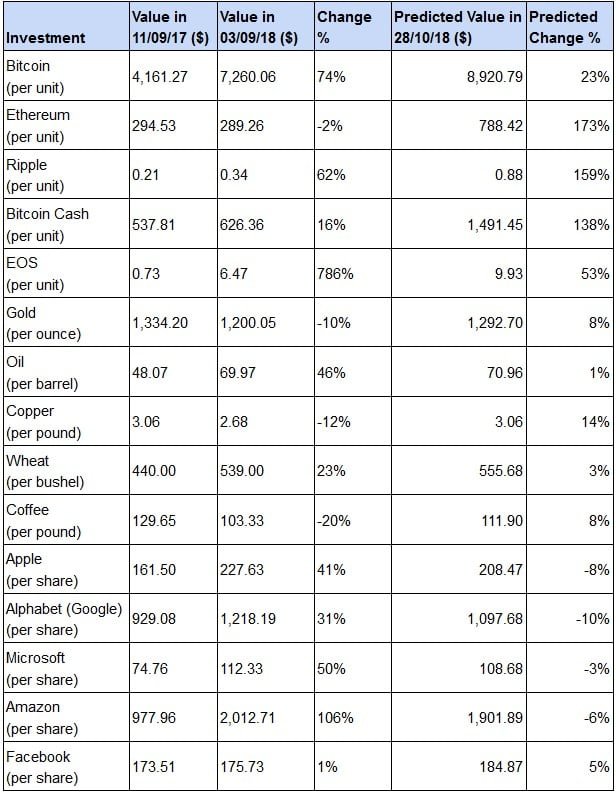