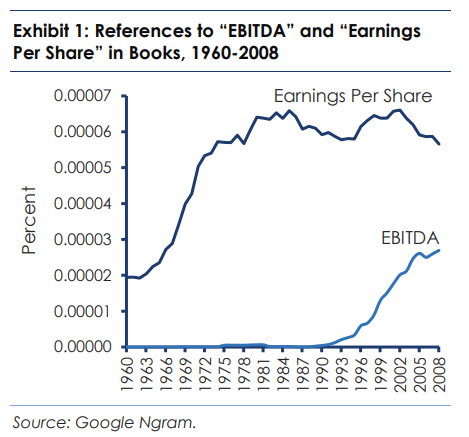 Over the past three decades, the discipline of financial analysis and accounting has changed significantly. One of the business changes has to be the use of EBITDA. This financial metric was barely used until the leveraged buyout boom of the 1970s and 80s when it became commonplace to use EBITDA or earnings before interest, tax, depreciation, and amortization when valuing companies. Private equity quickly discovered that by stripping out interest costs, tax and items related to capital spending, you can present a much more favorable view of a company’s financial situation, even though it might not be accurate.

One of EBITDA’s most vocal critics has been Warren Buffett. The Oracle of Omaha has previously told his investors, “We won’t buy into companies where someone’s talking about EBITDA. If you look at all companies and split them into companies that use EBITDA as a metric and those that don’t, I suspect you’ll find a lot more fraud in the former group. Look at companies like Wal-Mart, GE and Microsoft — they’ll never use EBITDA in their annual report.” Meanwhile, Charlie Munger, Buffett’s partner in crime has called EBITDA “horror squared.”