2. Number of US Public Companies Falls by Almost 50%

4. How to Add Real Estate Exposure to Your Portfolio

Most investors are not aware of this but the number of publicly-traded companies listed on US stock exchanges has plunged almost 50% since the peak in 1996. This phenomenon is not limited to the United States. It is also happening in Canada, Switzerland, Germany, France, the UK and other developed nations, which have seen the number of listed companies fall 20%–60% from the peak in the last couple of decades.

The other thing that is changing, perhaps the most important thing, is that more and more large companies no longer need to be listed on stock exchanges in order to raise capital. As more large companies elect to remain privately-held, and more publicly-traded companies convert to private, investors are deprived of sharing in the growth of some of America’s most exciting innovations. That’s what we’ll talk about today.

Before we get to that discussion, I will briefly analyze last Friday’s initial estimate of 2Q GDP.

Gross Domestic Product grew at a solid 4.1% annual rate in the second quarter, its best pace since 2014, boosting hopes that the economy is ready to break out of its decade-long slumber. The number was slightly below the pre-report consensus of 4.2% but at least it showed a surge in consumer spending and business investment.

That's the fastest rate of the growth since the 4.9% in the 3Q of 2014 and the third-best growth rate since the Great Recession. In addition to the strong 2Q, the Commerce Department revised its 1Q GDP reading up from 2.0% to 2.2%. The economy has now averaged 3.1% GDP growth over the last six months ended June.

In addition to the rise in consumer and business spending, increases in exports and government spending also helped. Consumer spending rose 4% while business investment grew 7.3% and federal government outlays increased by 3.5%.

Exports rose in part as farmers rushed to get soybeans to China ahead of expected retaliatory tariffs to take effect in the coming days. Declines in private inventory investment and residential fixed investment were the main drags on GDP in the 2Q, the report said.

All in all, it was a very strong report, and President Trump wasted no time taking credit for it.

Number of US Public Companies Fall by Almost 50%

Today there are fewer publicly-traded companies in the US than at any time over the last 40 years. The peak year for public markets was 1996, when over 8,000 companies were listed on US exchanges. Today that number is down nearly 50% to 4,336, according to the World Federation of Exchanges. 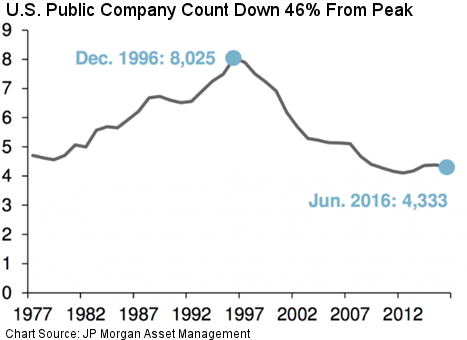 As noted above, this troubling trend isn’t just limited to the United States. The number of companies in developed markets around the world is shrinking: Canada, Switzerland, Germany, France, the U.K. and others have seen the number of listed companies fall 20%–60% from their peak. The question is, why?

Clearly the increase in mergers and acquisitions over the last 40 years played a major role in shrinking the number of US public companies.  As globalization became a more important factor, competition increased and companies became vulnerable to predators. Many sought refuge by consolidating with businesses in similar or related industries.

Likewise, the increase in leveraged buy-outs (LBOs) where management and/or outside investors take companies from public to private played a major role in reducing the number of listed companies. LBOs can have many different forms and structures. Meanwhile, the number of initial public offerings (IPOs) remains at a fraction of what it was in the 1980s and 1990s.

Running a publicly-traded company is always a challenge. A company is judged by its quarterly earnings performance, which sometimes causes it to make decisions that might not be in its long-term best interest. Executives of public companies have to spend time talking to security analysts and holding conference calls when they could be working on matters that would improve growth prospects. Legal issues and investor relations are also time-consuming factors.

Two basic incentives encourage companies to go public: raising capital and monetizing the value of the company for employees. Today, both of these objectives can be satisfied in the private market by venture capitalists and other investors. As a result, major innovative companies like Uber and Airbnb have chosen to remain private for much longer than would have been the case several decades ago. And more companies have elected to convert from public to private.

As more companies have deferred or avoided going public, the number of companies investors can choose from has become more limited. Although investors have been deprived of the opportunity of participating in their growth, the companies themselves have enjoyed more flexibility in the early stages of development when their earnings are likely to be volatile. Therefore, staying (or going) private is not necessarily an example of short-term thinking – it may be a sound business decision.

Final Note: While the number of publicly-traded stocks listed on US exchanges has declined by almost 50% (from over 8,000 in 1996 to 4,336 recently), total stock market capitalization has risen to a new record high of $32.2 trillion this year – thanks to big increases in stock prices in recent years. 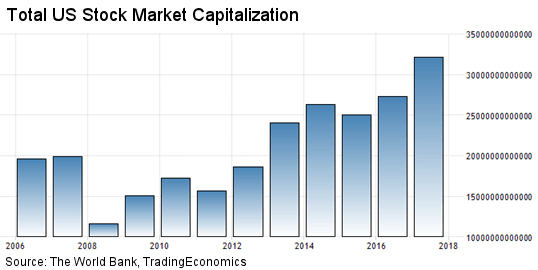 The World Bank estimates that total global stock market capitalization is at $80 trillion.

How to Add Real Estate Exposure to Your Portfolio

In the past, we sent out surveys to our clients and readers every few years. One of the things we included was a question about their investments aside from those they have with Halbert Wealth Management and ProFutures. We included a list of various investments, so they could just check the box if they had such allocations in their portfolios.

One thing that stood out to me over the years was how few clients and readers checked the box for real estate, aside from their primary residence. I always wondered why. I always wished we could find a really successful money manager who invested in real estate.

Well this year, we’ve found some really smart managers who run two unusual real estate lending funds that have been very successful (one for almost eight years), with very consistent returns with low volatility. I am very high on these two funds and believe that the vast majority of my accredited clients should take a serious look at them.

If you do, you’ll learn about their innovative strategy for real estate lending and why they have been able to deliver such consistent returns with very low drawdowns. You have a convenient way to do just that on Thursday of this week when we’ll host a live webinar with Adam Fountain, one of the founders and portfolio managers of these two successful funds.

I strongly encourage you to attend the webinar. If you have a conflict on Thursday, register for the webinar anyway, and we’ll send you a recorded version of the webinar that you can watch at your convenience. This is one investment opportunity that I really want you to consider!

As you may recall, Broadmark writes short-term, first deed of trust mortgages to homebuilders and builders of condominiums and apartments. They need this short-term financing to fund the construction of the properties they are building.

Broadmark started their first Fund in August 2010 shortly after the credit crisis ended, so they have a nearly 8-year track record and they currently have over $400 million in assets under management.

You really don’t want to miss the opportunity to hear from Adam about this strategy for accredited investors that you probably won’t find from your typical money manager – one that gives you the potential for consistent income, while limiting your downside risks. You can even ask Adam your questions about the Broadmark Funds at the end of the presentation.

Even if you can’t make the live webinar, be sure to sign up. We’ll then send you a recorded version of the webinar you can watch at your convenience. You can also call us at 800-348-3601 if you want to learn more about Broadmark.

Where Have All the Public Companies Gone?

Fewer U.S. Listed Public Companies – Is That a Problem?

Gary's Between the Lines Blog: 2Q GDP Expected to Top 4% in Report Tomorrow