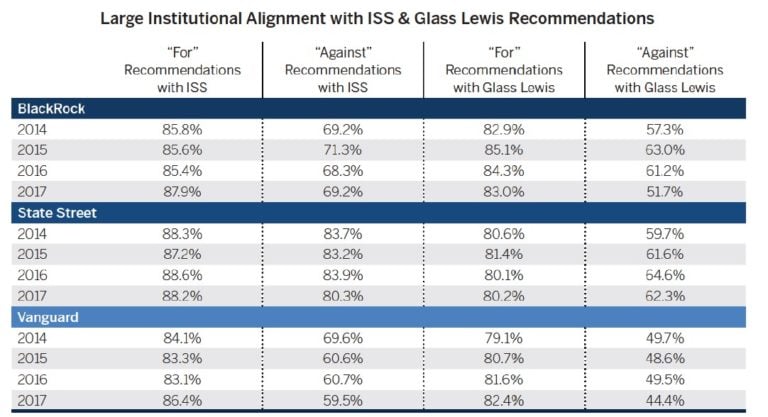 This report, titled “The Conflicted Role of Proxy Advisors,” explores the history of proxy advisory firms; the impact they have on major policies at most publicly traded companies; and their increasingly activist stance on social, political and environmental issues. Its launch comes on the heels of growing scrutiny of proxy advisory firms by academics, trade associations, and other institutions and individuals, including the Corporate Governance Reform and Transparency Act of 2017, a bipartisan bill co-sponsored by Congressmen Sean Duffy (R-WI) and Gregory Meeks (D-NY).

“In this increasingly complex investment and financial landscape, investors rely heavily on the services of proxy advisory firms to support their proxy voting decisions,” said Tim Doyle, ACCF’s vice president and general counsel, and author of the report. “ISS and Glass Lewis regularly provide services to issuers and companies with shareholdings in most publicly traded companies, wielding outsized influence and raising concerns over numerous conflicts of interest. The objective of the report is to enlighten those within the financial community about the unchecked power that proxy advisory firms currently have and encourage more oversight of these powerful industry bodies.”

Proxy advisory firms exercise their influence by providing analysis, recommendations, and consulting services to issuers and companies about how annual and special proxies should be voted. The lack of accountability, transparency, responsiveness, and competition in the proxy advisory firm industry has given a small number of businesses significant influence over corporate governance practices and disclosure requirements.

As a result, proxy advisory firms have emerged as “quasi-regulators,” wielding their influence to require additional disclosure from public companies without any statutory authority, particularly around environmental or social issues. These recommendations, which are drawn from unaudited data sources, create new disclosure requirements that ultimately encumber companies with additional costs and burdens. This type of quasi-regulatory process especially disadvantages small and mid-sized companies, in favor of larger companies that have the resources to comply.

Underlying the issues related to proxy advisory recommendations is a broad lack of oversight over these institutions. While the investment community typically considers proxy advisory firms to be neutral arbiters of good governance, they are in fact, for-profit enterprises that frequently cater to the needs and objectives of their clients. Problematic conflicts of interest arise because the firms are, by design, incentivized to align with the comments of those who use their services the most and change policy to create a better market for their company-side consulting services.

The full text of the ACCF’s “The Conflicted Role of Proxy Advisors,” which delves into all of these findings and more, is available here. Additional materials and commentary can be found at www.ACCFcorpgov.com.

The American Council for Capital Formation is a nonprofit, nonpartisan economic policy organization dedicated to the advocacy of pro-growth tax, energy, environmental, regulatory, trade and economic policies that encourage saving and investment.

Part I: Understanding The Proxy Advisor Business Model – And Its Inherent Conflicts

What Are ISS And Glass Lewis?

Institutional investors have an increasingly difficult task finding value and minimizing risk in today’s complex financial environment. Investors have access to more data from issuers and markets than ever before, but sifting through swaths of data, let alone using it in a way that adds value to investments, remains difficult. More and more, institutional investors rely upon external validators and resources to provide an information layer to make data more digestible and assist in making investment and
voting decisions.

Proxy advisory firms came to rise with the passage of The Employee Retirement Income Security Act of 1974 (“ERISA”)6, which, among many other requirements, requires institutions managing money for private pension funds to vote at company Annual and Special meetings. In the last two decades, proxy advisory firms have become an increasingly influential voice in shareholder voting. Although all institutions are required to create and make publicly available their proxy voting guidelines, the corporate governance decision-making teams at those institutions are small compared to the amount of proxy voting decisions they need to make. Small and mid-sized institutions, pension funds, and hedge funds may rely heavily on the recommendations of these firms to inform their voting decisions. Over the past few decades, as a greater share of stock market ownership transferred from individual retail investors to mutual funds and hedge funds, the power and influence of proxy advisory firms has increased substantially.

In recent years, these institutions have drawn increased scrutiny for the conflicts of interest inherent in rating and providing voting recommendations concerning public companies while simultaneously offering consulting services to those same companies, including how they can improve their ratings and voting recommendations. Some question the qualifications of proxy advisory firms and the ultimate success of their recommendations.7 Others claim they have no real incentive to accurately make recommendations that yield shareholder value.8

Still many others are concerned that with limited oversight and external guidelines as largely self-regulated entities, ISS and Glass Lewis (along with other startup competitors) are able to significantly influence the direction of a company through their recommendations on shareholder proposals, Boards of Directors, or mergers and acquisitions. “Critics persistently complain that proxy advisory firms’ activities lack transparency, that proxy advisors operate in oligopolistic markets, that they have a check-the-box mentality, and that they suffer from conflicts of interest.”9

ISS is the older of the two major proxy advisors and is perceived to be the most influential. Prior studies indicate ISS claims roughly 60 percent of the current share in the market,10 though the companies themselves cite more similar numbers of customers in recent years. ISS pioneered the development of policy-based proxy voting recommendations, online voting, and providing voting recommendations on proxy proposals; these activities remain the core activities of the fi rm. However, the
company’s service off erings, or “solutions,” have evolved beyond its initial proxy services and governance research services to include investing data and analytics that inform the development of ISS’s corporate rating off ering, as well as a host of ratings11 and consulting12 services.

ISS’s research service analyzes proxy materials and public information that, in turn, informs their voting recommendations for these meetings. The company covers more than 20,000 companies globally and produces proxy research analyses and vote recommendations on more than 40,000 meetings each year.13 ISS’s research arm primarily collects and organizes governance data gleaned from a company’s proxy materials, including (most recently) analysis of information and data on environment and social issues through its ISS-Ethix off ering.14 This data informs the company’s QualityScore off ering, a numeric rating, largely based on what ISS views as fulsome disclosure of a company’s risk across Environmental, Social, and Governance categories.15

ISS ProxyExchange is a guided platform through which investors can operationally vote their proxies.16 The company works with clients to execute more than 8.5 million ballots annually, representing 3.8 trillion shares.17

Additionally, and most controversially, ISS provides consulting through its Governance Advisory Services offering.19 Although the details of what the company’s consulting service entails are not clearly defined on ISS’s website, this service has come under much criticism as an attempt to simultaneously rate a company and sell consulting services to companies seeking to improve that
rating or alter a poor voting recommendation.20

ISS states on its website that over 1,700 institutional clients make use of its services to vote at the approximately 40,000 meetings in 117 countries ISS covers annually.21 ISS has approximately 1,000 employees spread across 18 offices in 13 countries,22 but the amount of staff specifically dedicated to analyzing and providing voting recommendations on the 40,000 global meetings annually
is not disclosed.

To support the large workload, reports have suggested that ISS engages in significant outsourcing that is not readily disclosed: “To handle its proxy season workload, ISS hires temporary employees and outsources work to employees in Manila. Given the large number of companies that the proxy advisors opine on each year, the inexperience of their staff s, and the complexity of executive pay practices, it’s inevitable that proxy report will have some errors.”23

ISS may not have envisioned the power and influence it carries today. As noted in a recent extensive piece on the proxy advisor’s history, Michelle Celarier assesses:

"That ISS has become the kingmaker in proxy contests between billionaire hedge fund activists and their multi-billion-dollar corporate prey is even more astonishing given that ISS itself is worth less than $1 billion and started out as a back-office support system, helping shareholders cast their ballots on what are typically mundane matters of corporate governance. Says one former ISS executive who now works at a hedge fund: ‘ISS sort of stumbled into this powerful role.”24

ISS was formed in 1985 with the stated aim of helping mutual funds and asset managers better analyze management proposals.25 The company has changed hands many times since its inception, and has been both privately and publicly held, most recently by MSCI from 2010-2014.26,27

In recent years, under current CEO Gary Retenly, ISS has acquired environmental and climate-focused data and analytics companies in an effort to bolster the firm’s environmental research and policy offering. In June 2017, ISS acquired the investment climate division of South Pole Group, a Zurich-based environmental advisory fi rm.28 In another play to continue to promote a demand for environmental and social data and insights, in January 2017, ISS acquired IW Financial, a U.S.-based ESG research, consulting, and portfolio management solutions firm.29 IW Financial went on to be integrated into the aforementioned ISS-Ethix. Most recently, ISS acquired oekom research AG, a leader in the provision of ESG ratings and data, as well as sustainable investment research.30 Announced in March 2018, oekom will be renamed ISS-oekom and will complement the work of ISS’s existing responsible investment teams.

All of these acquisitions, the most rapid-fire in a single area in the company’s history, can be perceived as a further effort to capitalize on and drive focus to perceived risks related to environmental and social issues at companies across investors and the political community alike. This paper later explores how ISS and its proxy advisor peers have used these acquisitions to fuel increasing political and social activism in its policies. 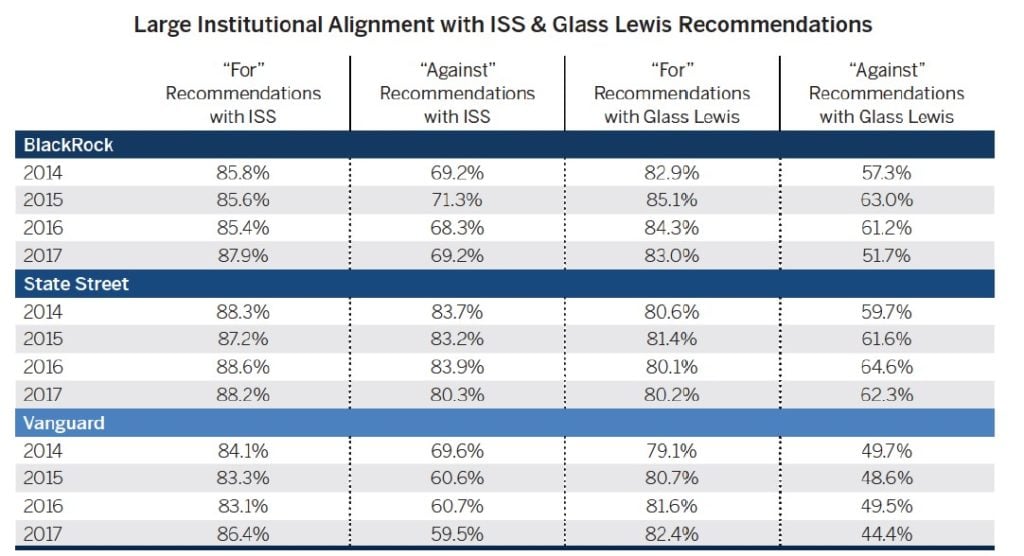