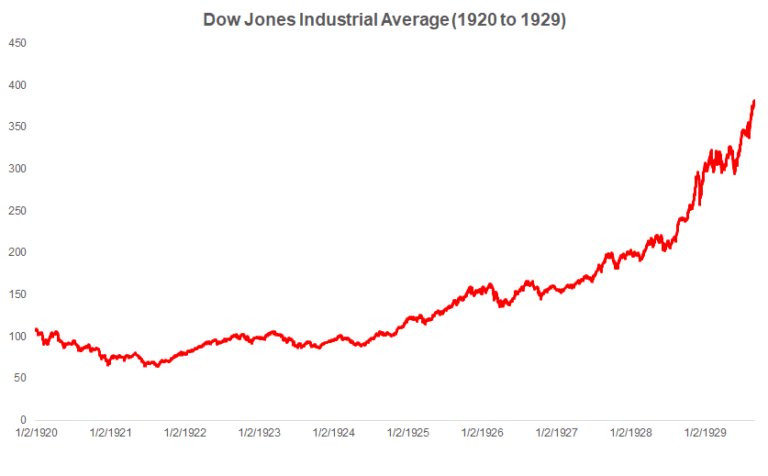 On October 16, 1929, Yale economist Irving Fisher wrote in the New York Times that “Stock prices have reached what looks like a permanently high plateau.” Eight days later, on October 24, 1929, the stock market began a four-day crash on what became known as Black Thursday. This crash cost investors more than World War I and was one of the catalysts for the Great Depression. Irving Fisher’s declaration went down as the worst stock market prediction of all time.

Before the 1929 stock market crash: Risks and warning signs

Hindsight is always 20/20 but in the Roaring Twenties, optimism and affluence had risen like never before. The economy grew by 42% (real GDP went from $688 billion in 1920 to $977 billion in 1929), average income rose by about $1,500 and unemployment stayed below 4%. In the wake of World War I, the U.S. was producing nearly half of global output and mass production made consumer goods like refrigerators, washing machines, radios and vacuums accessible to the average household. Investing in stocks became like baseball – a national pastime. As newspaper headlines trumpeted stories about teachers, chauffeurs and maids making millions in the stock market, concerns about risk evaporated.

Everyone wanted to get in on the action and credit was readily available. In particular, businesses and individuals borrowed money to buy stocks “on margin.” Buying on margin meant that an investor could put down 10-20% of their own money and borrow the rest from their stock broker. This type of leverage was extremely risky because if the stock price fell below the loan amount, the stock broker could issue a “margin call,” requiring immediate repayment of the loan. Despite this risk, even banks were buying stocks on margin, and, since no law prevented it, some used their customers’ deposits to do so. The chart below shows the Dow Jones Industrial Average (a measure of stock market performance) from 1920 to September 1929 and how, for close to a decade, the stock market had consistently gone up.

On March 25, 1929, the stock market corrected, falling 10% from its 52-week high. Margin calls were made and investors panicked initially but reassurance from a group of bankers that their banks would continue to lend assuaged concerns and the market recovered. Bankers would try to reassure markets the same way after Black Thursday but to no avail.

Other warning signs began to appear but were largely ignored. Steel production, car sales and homebuilding all slowed. Several banks failed. Nevertheless, most economists shared Irving Fisher’s optimism about the market outlook, although a few outliers did warn of a downturn. Yet as stocks hit new highs in the summer months, investors ignored pessimistic predictions entirely and appeared justified in doing so when the Dow Jones Industrial Average hit a record high of 381.17 on September 3, 1929, up 27% from the previous year. After the crash, the Dow Jones would not return to its peak until 1954.

Klarman Warned About FAANG Valuations Before They Crashed

Over the next few weeks, stock prices began to slide downward. By October 23, 1929, the Dow Jones was down nearly 20% from its high and in the last hour of trading that day, stock prices took a sudden plunge. The market closed amidst confusion and concern. The next day would go down in history as Black Thursday. At the opening bell on October 24, 150,000 shares of oil company Cities Service were traded for $8.4 million. It was the largest block trade ever made. By mid-morning, blue-chip stocks were falling as much as $10 with every trade and by noon, big-name stocks RCA Corporation and Montgomery Ward had plummeted 35% and 40%, respectively. To stem the rising panic, Richard Whitney, president of the New York Stock Exchange and lead broker for J.P. Morgan bid $10 higher than the previous per-share bid for 25,000 shares of U.S. Steel. The strategy worked and the market rebounded. Montgomery-Ward for example had opened at $83/share, hit a low of $50/share and closed at $74/share. At the closing bell, the Dow Jones had fallen 11% and nearly 13 million shares had exchanged hands, triple the normal trading volume. Transactions were printed on ticker tape, which could only produce 285 words per minute. The ticker tape didn’t stop running until four hours after the market closed.

On Friday, markets appeared calmer and trade volume receded to six million shares. Investors spent a tense weekend assessing their portfolios, and when markets reopened on Monday, prices plunged and trade volume spiked again. Unlike on Black Thursday, there was no eleventh-hour recovery.

On Black Tuesday, October 29, 1929, investors were in a full-blown panic. Three million shares were traded in the first thirty minutes alone. As investors tried desperately to communicate with their stock brokers, phone lines jammed and Western Union telegrams tripled. False rumors that investors were jumping out of skyscrapers fueled the panic. Fistfights broke out on the trading floor. Stock brokers called in margins and sold the stocks of investors who couldn’t immediately repay the 80-90% they had borrowed, wiping out life savings in a matter of seconds. When the market finally closed, the Dow Jones had fallen 12%. It took 15,000 miles of ticker tape to record the 16.4 million shares that had been traded. To put that in context, the distance from Manhattan to Sydney, Australia is a mere 9,931 miles. The market had officially crashed.

What caused the stock market to crash in 1929?

The stock market crash of 1929 did not have one single catalyst. Multiple factors contributed, including:

Before the crash, nearly 40 cents of every dollar loaned in America was used to buy stocks, typically through margin buying. When the market started to take nosedives, brokers began to make their margin calls and borrowers were often unable to pay up. When that happened, brokers simply sold those stocks, wiping out savings and increasing panic.

The legal protections we have today on bank deposits and securities transactions didn’t exist in 1929. After the crash, banks were only able to honor 10 cents on the dollar because they had used customers’ deposits to purchase stocks without their knowledge. Additionally, investors had no recourse to recover funds if their brokerage firm went out of business. The Federal Deposit Insurance Corporation (FDIC) and the Securities and Exchange Commission (SEC) were founded in 1933 and 1934, respectively, as part of President Franklin D. Roosevelt’s efforts to restore confidence in the markets under the New Deal.

Overpriced stocks are often cited as a key reason for the crash of 1929. However, there is not a lot of evidence to support this. Stocks increased by 120% between 1925 and the third quarter of 1929, an average annual increase of about 22%. This is a big increase but in the context of a period of tremendous economic growth, it is not unreasonable. Price-to-earnings (P/E) ratios also do not indicate overvaluations. In 1929, the average P/E ratio of stocks was around 15. In January 2018, the S&P 500’s P/E ratio was just under 23. It may be more accurate to say that it was the perception of overpricing that contributed to the crash as public figures and news headlines expressed this view.

In early October 1929, newspapers stoked concerns with sensational headlines. Most notably, on October 3, 1929 Britain’s finance minister, Phillip Snowden, called the U.S. stock market a “perfect orgy of speculation” and the next day, The Wall Street Journal and The New York Times ran stories agreeing with him. The New York Times’ page one headline blared “Year’s Worst Break Hits Stock Market.” On October 17, The Washington Post ran a headline “Crushing Blow Dealt to Stock Market” following a market dip the previous day. Associated Press stories – which were picked up by other outlets and therefore widely read – focused on the poor performance of public utilities, which generated significant worry among investors. Public utilities stocks were more than triple their book value in 1929 so these headlines did generate valid concerns. In the run up to Black Thursday, major newspaper headlines continued to focus on market dips, the lack of alarm among Washington officials about these dips, and the rising panic of investors. Newspapers cannot be faulted for reporting the news but the headlines certainly heightened people’s fears. The effect of these news headlines was roughly the equivalent of yelling “fire” in a crowded movie theatre.

Economists and historians have long argued that Federal Reserve policy contributed to the crash. In 1928 and 1929, the Fed raised interest rates in an effort to limit securities speculation. Higher rates caused economic activity to slowdown in the US. The Fed’s actions also had unintended global consequences. Because of the international gold standard, foreign central banks were forced to raise their interest rates as well, and this monetary tightening triggered recessions in several countries and caused global commerce to contract. In 2002, Ben Bernanke (then a member of the Federal Reserve Board of Governors) publicly acknowledged the Fed’s role in the crash, saying that the Fed’s mistakes contributed to the “worst economic disaster in American history.”

What happened to investors’ portfolios in 1929?

As much as markets fell in the crash, they still had a long way to go before finally bottoming out in 1932.

Could investors have avoided catastrophe?

John Maynard Keynes didn’t see the crash coming and was nearly cleaned out in 1929. In fact, he was so shaken by the crash and ensuing depression that he changed his strategy, deciding that the “animal spirits” of the market could not always be trusted and that irrational behavior on the part of investors played a role in determining stock prices regardless of fundamental valuations.

If Keynes was unable to avoid the crash, it seems entirely unreasonable that the average investor could be expected to do so. The market was incredibly difficult to time in 1929, particularly because stock prices rallied before larger crashes on multiple occasions. This made it virtually impossible to tell when the crash was over. Some investors correctly read warning signs and sold their stocks ahead of Black Thursday only to buy back in at bargain prices the next day and suffer even bigger losses on Black Tuesday.

Is it possible to avoid losses in a stock market crash?

The bad news is that stock market crashes are a reality of investing. Black swan events can and will happen. The good news is that while it is virtually impossible to reliably time the market, investors can still protect their savings from a crash.

One way to minimize the risks from a potential market crash is to capture a moderate amount of upside market growth while ensuring that savings are fully protected over the long term. This can be done in your own brokerage account or through a new savings instrument called Benjamin.

Benjamin is an annuity that offers some participation in the market’s growth, while protecting savings against any loss.  It charges a flat fee of 0.09% and replicates the same time-tested strategies of institutional investors (e.g., pension funds and endowments). By putting the right amount of money in bonds and allocating the rest to stock index options, the Benjamin annuity ensures that the worst-case scenario for an investor’s portfolio will be to break even.