It looks as if investors decided to take a more risk-on approach during December against the backdrop of steadily rising markets according to a new report from credit rating agency Moody’s, which looks at the US prime money market fund market.

The repor notes that the assets of a surveyed group of US institutional prime money market funds fell by 5% during December as nine out of ten funds lost assets even though the group still produced a positive return for investors in the period. The group surveyed by Moody’s generated a total profit for investors of 6% for the quarter to the end of December.

Rather than this being a significant shift in risk attitudes among investors, it looks as if it was just a rebalancing as, during January, flows turned positive once again and the momentum has continued into February according to the Moody's report.

The credit rating agency expects this trend to continue throughout the year. Its analysts believe that money market funds will end 2017 with more assets than they started with although, the report does caution that flows will depend on corporate actions in response to recent US tax reforms as well as the competitiveness of fund yields to rates on institutional bank deposits.

The ten most substantial US money market funds surveyed by Moody's are all responding to the changing rate environment by extending the duration of their portfolios. According to the credit rating agency's analysis, the average weighted maturity of the surveyed group was 27 days at the end of 2017, that's compared to a reading of 24 days at the end of November 2017.

According to the report, "an increase in the funds' one-month to three-month maturity bucket was the primary driver of the WAM increase, as managers pushed to get more assets invested past year-end." Meanwhile, "Funds' allocation to floating-rate securities remained elevated" in Q4 as managers positioned their portfolio to take advantage of the changing rate environment.

It also appears that managers have been reducing the overall level of risk in their portfolios thanks to rising interest rates, which are allowing them to achieve higher yield from investment grade securities.

"The average stressed NAV of the surveyed group improved to .9924 in December from .9919 at 30 September 2017. This represents a continuation of the risk reduction trend we observed in Q3 2017. Stronger credit quality, which was highlighted by three percentage point increase in exposure to AAA rated securities, was the primary driver behind the reduction in market risk." 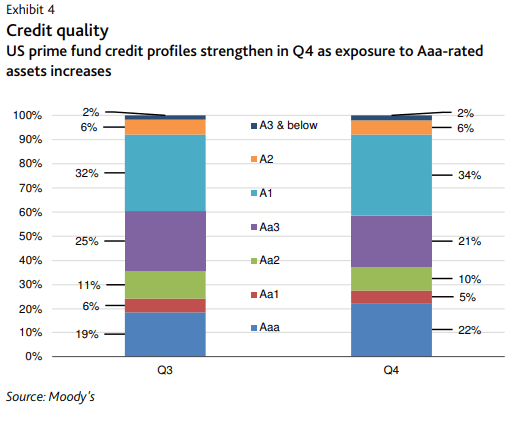