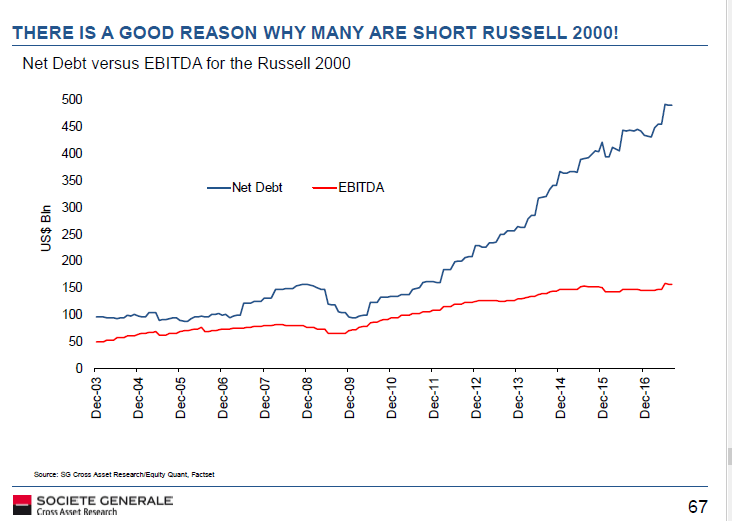 Fear of overvaluation – particularly for U.S. equities – has driven far too many investors to miss the strong bull market. For market bears to be proven right, according to Albert Edwards, it will take one or more of several triggers.

Edwards is the global strategist for Societe Generale and is based in London. He spoke at his firm’s annual investment conference in London on July 9. A copy of his slides, as well as those from his colleague Andrew Lapthorne’s presentation, can be found here.

Edwards is not known for providing upbeat forecasts, but he said at the outset that he is not as bearish as usual. “I understand the competitive pressure to participate,” he said, “despite that fact this will go horribly, badly wrong.”

In 1996, Edwards forecast an “ice age” during which bonds would outperform stocks. He based this on his experience observing the Japanese economy, predicting that equity yields would rise as their prices fell, while bond yields would decline.

He noted that the U.S. equity market peaked in 2000, just as Japan did in 1989, and that U.S. stocks are still in a secular downtrend based on cash-flow yield. Edwards said the same thing happened in Japan and it continued for 10 years.

“The ice age is still intact,” he said.

The fate of the bull market

Do valuations still matter? Edwards said the U.S. forward P/E ratio is at a “considerably and extremely unusually high level,” higher than Europe and Japan. It’s not just the FANGS and technology stocks, he said. Using data from Grantham Mayo van Otterloo (GMO), he showed that the Shiller CAPE is not very dependent on the sector composition of the market, which accounts for only a small portion of the gap relative to historical levels.

Investor sentiment was missing a year or 18 months ago, he said, but now that data depicts “full-on bulls.” Using data from the American Association of Individual Investors, he showed that retail exposure is 75% in stocks (based on the ratio relative to cash) and at historically high levels. Data from Investors Intelligence shows that professional advisors are as bullish as prior to the 1987 crash, Edwards said.

“Essentially everyone has decided valuations don’t matter,” Edwards said. “But they do.”

He said the run-up to the 1987 crash was similar to the last few years. At that time, the bond yield started to rise following a period of rapidly increasing valuations. Oil had fallen but the economy recovered and was very strong, according to Edwards. “It looked very vibrant,” he said, “yet the market collapsed.”

What happened? Edwards said the dollar was falling and bond rates rose in response. The Bundesbank raised interest rates instead of helping to stabilize the dollar. The market feared the dollar would plunge and the Fed would have to raise rates, he said, triggering a recession. But market valuations didn’t support a recession.

Such a recession could be the trigger for a market pullback, he said, “or even just the fear of one.”