Some of you reading this might already be familiar with the “Parable of the Talents,” but it’s worth a brief retelling. The story, which appears in the gospels of Matthew and Mark, involves a master who entrusts three servants with some of his “talents,” or gold coins, while he’s away on business. Two of the servants take a risk by putting the money to work and end up doubling their master’s wealth. The third servant, however, buries his share to “keep it safe” and so doesn’t generate any returns. (Indeed it likely loses value because of inflation.)

When the master returns, he’s so pleased at how the first two servants grew his wealth that he puts them in charge of “many things” and invites them to share in his own success.

The third servant, though, he calls “wicked and lazy” and says he might as well have deposited the money in a bank while he was away—at least then he would have received a little interest. The servant is punished by having his share of the talents given to the two who faithfully grew their master’s money, leaving him with nothing.

The lesson here should be plainly obvious, and we can express it in a number of different ways: There can be no reward without risk. You must spend money to make money. You reap what you sow. This should resonate with investors, entrepreneurs and any true believer in the power of capitalism.

Jesus’ parable applies not just to individuals but to corporations as well. Companies must grow to keep up with the rising cost of labor and materials and to stay competitive. To do that, they must put their money to work just as the two servants do.

And just as the two servants were invited to share in their master’s success, corporate growth has a multiplier effect—for the company’s employees and their families, shareholders, the local economy, strategic partners, companies up and down the supply chain and much more.

I think the business model that best illustrates the meaning of the “Parable of the Talents” is the one practiced by gold and precious metal royalty companies. As much as I write and talk about royalty companies, I still encounter investors who aren’t aware of how significant a role they play in the mining space.

As a refresher, these firms help finance explorers and producers’ operations by buying royalties or rights to a stream. Because miners have had to slash exploration budgets since the decline in metal prices, the kind of financing royalty companies provide has only grown in demand—as evidenced by the mostly positive earnings reports this week.

Chief among them is Franco-Nevada, which had a very strong third quarter, reporting earnings of $55.3 million, or $0.30 a share, up 3.4 percent from the same three-month period last year. The Toronto-based company, having also recently diversified into the oil royalties space, closed its purchase of an oil royalty for C$92.5 million, bringing the number of its oil and gas assets up to 82. Including precious metals and other minerals, the total number of assets Franco-Nevada had in its diverse portfolio as of the end of the quarter stood at 341.

Here’s the multiplier effect: Not only do the miners benefit from the deals, allowing them to continue exploration and other operations, but shareholders are rewarded handsomely. Since the company went public nearly 10 years ago, it’s raised its dividend each year and its share price has outperformed both gold and relevant gold equity benchmarks. After its earnings announcement on Monday, Franco-Nevada stock closed up more than 6 percent on the New York Stock Exchange (NYSE), its best one-day performance in nearly a year and a half. Shares hit a fresh all-time high this week.

Other royalty companies’ reports were just as impressive and show the rewards of putting your “talents” to work. Sandstorm Gold, reporting higher operating cash flow of $11.9 million, has acquired as many as 10 separate royalties since the end of September on properties in Peru, Botswana and South Africa that collectively cover more than 2.4 million acres.

Osisko Gold Royalties bought a $1.1 billion portfolio of 74 precious mineral royalties, including a 9.6 percent diamond stream. The company reported record quarterly gold equivalent ounces (GEOs) of 16,664, up 65 percent from the same quarter last year, and record quarterly revenues from royalties and streams of $26.1 million, up 48 percent.

Royal Gold also had a strong quarter, reporting operating cash flow of $72 million, an increase of 30 percent from last year, and returned as much as $16 million to shareholders in dividends.

Although some investors might not realize how important these companies are to the industry, many other investors are opting to place their bets on royalty names, seeing them as having ample exposure to precious metals without some of the risks associated with producers. In its review of the third quarter, the World Gold Council (WGC) reported that global gold demand fell to an eight-year low as investment in gold ETFs slowed to 18.9 metric tons, down from 144.3 metric tons in last year’s September quarter. This could be a consequence of the media’s continued negative coverage of gold, despite its competitive performance against the S&P 500 Index. Whatever the cause, in this environment, there was no lack of love for royalty names, as you can see in the chart above.

We were one of Wheaton Precious Metals’ seed investors in 2004, when it was known as Silver Wheaton. Because Franco-Nevada wouldn’t be spun off from Newmont Mining for another three years, Wheaton had first-mover advantage. It was something new, something different. This, coupled with what I recognized as a superior business model, gave me the conviction to allocate capital into the fledgling company, a move that turned out to be highly profitable.

Today I have the same conviction in blockchain technology and digital currencies. As of the end of October, the initial coin offering (ICO) market had raised $3 billion so far this year. That’s more than seven times the amount generated in crowdfunding in all of the previous years before 2017. And Bloomberg just reported that Google searches for “buy bitcoin” recently surpassed searches for “buy gold.” With bitcoin’s market cap having grown past that of Goldman Sachs and Morgan Stanley, cryptocurrencies can no longer be written off as a curiosity. Major financial institutions have become bullish, having filed approximately 2,700 patents in blockchain technology.

Abigail Johnson, the youthful chairman of Fidelity, was quoted as saying, “Blockchain technology isn’t just a more efficient way to settle securities, it will fundamentally change market structures, and maybe even the architecture of the internet itself.” Johnson allegedly has a crypto-mining computer rig in her office, and Fidelity accountholders are now able to see their bitcoin holdings on the brokerage firm’s online platform. USAA, the massive financial firm used by millions of U.S. military personnel and their families worldwide, provides the same service. This all comes as Coinbase, a leading digital currency broker, saw a record number of people opening new accounts on its platform recently, doubling the number of accounts from the beginning of the year. In one 24-hour period, 100,000 new accounts were opened.

A lot of this growth in demand is thanks to millennials, the largest U.S. generation. Forget the stereotype of the “entitled” millennial in the workplace and the misconception that they’re all wasting their money on $10 avocado toast. Consulting firm Deloitte estimates that by 2020, millennials will make up 50 percent of the workforce and control between $19 trillion and $24 trillion. Many are savvy investors and were found to be more likely to be aware of their brokerage account fees than older generations, according to Charles Schwab’s Modern Wealth index.

Millennials lead different lifestyles than older generations. Many of them choose to rent instead of own to stay mobile. They’re more likely to get their news from Twitter than from TV. Online dating apps have helped foster today’s hookup culture, but while young people now might have more sex partners than before, they’re having less sex overall than their parents or grandparents might have had at that age.

It’s little surprise, then, that millennials are among the earliest and most enthusiastic adopters of blockchain technology, bitcoin and digital currencies in general—none of which existed even 10 years ago. A poll conducted by Blockchain Capital found that large percentages of millennials would prefer $1,000 in bitcoin to $1,000 in other assets. More than a quarter said they would prefer bitcoin to stocks, while nearly a third preferred it to bonds. 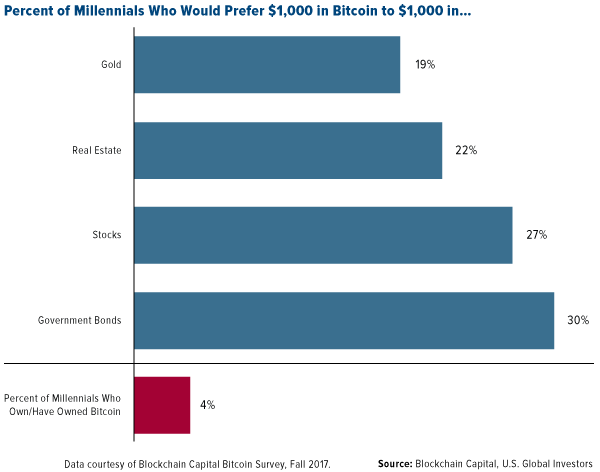 What I find especially encouraging is that only 4 percent of those who took the poll owned or had owned bitcoins. I say encouraging because this suggests there’s quite a lot of upside potential for bitcoin ownership, which in turn could raise prices further. As I shared with you recently, Metcalfe’s law states that the bigger the network of users, the greater that network’s value becomes. Consider Facebook. The social media giant has more than 2 billion active users. That’s 2 billion pairs of eyes Facebook is able to charge top dollar for advertisers to reach, helping it deliver record profits in the third quarter.

We could see the same thing happen across the blockchain and cryptocurrency network as more and more businesses and people embrace this new form of exchange.

It should be clear by now that something is changing in financial markets, and this is what inspired me to allocate part of our capital in a company with first-mover advantage in the cryptocurrency space, just as we did with Silver Wheaton years ago. As the “Parable of the Talents” teaches us, no reward can come to you without some risk-taking. Doing nothing is not an option.

That company is HIVE Blockchain Technologies, a blockchain infrastructure company involved in the mining of virgin digital currencies. The first company of its kind to sell shares to the public, HIVE began trading on the TSX Venture Exchange on September 18.

I’m very excited about this new chapter in our company’s history. If you weren’t on today’s earnings call, you can download the slide deck here to learn more about our deal with HIVE and what it means for our investors and shareholders.