January 12th, 2017
Mike McDermott: Listen, here’s the thing. If you can’t spot the sucker in your first half hour at the table, then you ARE the sucker. – Rounders, 1998

In any zero-sum endeavor, it pays to know who you’re playing against.  In a 9 person poker game, who the sucker is becomes clear fairly fast. But in financial markets, figuring out who the sucker is can take quite a bit longer, particularly when the markets all start moving in the same direction. This herding mentality can lead to crowding into trades, whether its Nifty Fifty stocks in the 1970s, internet stocks in 1999, AAA-rated senior CDO notes in 2007, or…passive investing today.

There is lots of data about the saturation of passive today, but being superficial, I like to look at the obvious things that are right in front of me.  Earlier this week the Wall Street Journal ran an article on Jeremy Grantham and his firm, GMO. The short version: investors are doing it again.  $40 billion has been pulled from the firm, just as stocks are at all-time highs.  This is the same guy who warned about the internet bubble in 2000 and the stock market in 2008, and was right. And yet…since he’s been wrong for a little while, out goes the money.  So who’s right?  Grantham, or this guy who just pulled $211 million from him: “GMO is a deep-value investor that takes a really long-term view,” said Dan Gallagher, chief investment officer of the Ventura County Employees’ Retirement Association. “But the board felt it was time for a change.”  Ok.  We’ll see how that works out for them.  Anyone want to place a bet?

But it’s not just Grantham.  If it was, then I’d be looking at other factors.  Is the game he’s playing oversaturated with better players now?  Did he lose his edge? Or is it just a bad run of the cards?  Here’s where the other players at the table matter.  Let’s look at who’s down a bit in chips.  Paul Tudor Jones is having a bad run.  David Einhorn at Greenlight can’t catch a break.  Even John Burbank at Passport had a rough year.  What’s really interesting to me is that all 4 of these investors utilize different investment strategies or focus on different markets, but all have excellent long-term records that suddenly went bad.  Did they all get dumb, all at once?  Or is something else going on?

Mike McDermott: [Narrating] In “Confessions of a Winning Poker Player,” Jack King said, “Few players recall big pots they have won, strange as it seems, but every player can remember with remarkable accuracy the outstanding tough beats of his career.” It seems true to me, ‘cause walking in here, I can hardly remember how I built my bankroll, but I can’t stop thinking of how I lost it. – Rounders, 1998

So why have the cards suddenly gone so cold for so many of the best investors?  What changed?  Just like in past bubbles, dumb money is on a hot streak, which is running over the better players – in the short term.  But just like you always see the same faces at the final tables of professional poker games, I think we’re about to see a turn in the game of investing, where the sheep start getting sheared again and the dumb money gets flushed out.  I don’t know what the trigger will be, just like no one knew that Yahoo actually reporting a profit in March 2000 would trigger the bursting of the internet bubble, but it will happen.  Probably sooner than later.

I think we are at or near “peak passive” as it’s being called. When everyone knows something to be true, it’s probably not. And right now the one thing that “everyone” knows is “true” is that passive always beats active investing. Instead of folding in the face of that, I think it’s about time to call that bet.  Don’t believe me?  Let’s review some numbers.  According to ICI, since the end of 2006 investors have taken about $1.2 trillion from actively managed mutual funds and given $1.4 trillion to equity index funds and ETFs in the U.S. alone.  That’s a lot of money.  How much is it?  Well, when you consider that the U.S. equity mutual fund industry has grown from just $284 billion in AUM in 1989 to around $6.7 trillion today, it’s a lot.  And look at the growth in Index funds – they were just $3 billion in AUM in 1989 and are about $2 trillion today, or nearly 30% of total assets under management, according to Credit Suisse.

The issue is timing. While it’s usually fairly clear when a bubble is forming, it’s a lot harder to time when it’s going to pop. These processes usually become self-reinforcing, as successful relative performance leads more investors to invest in the same strategies, driving up their assets, with which they buy the same securities they already own, and on and on.  This is the “Madness of Crowds” Charles Mackay wrote about in 1841 that infects markets periodically. (You can see it at the craps table in a casino as well.  They’re always the ones having fun. Until they bust.)  But it’s this same crowding into a narrow asset class that creates future problems, as there are fewer assets on the other side of the trade to buffer the eventual reversal.  See the $211 million that Ventura County took out.  Or the other $1.4 trillion in actively managed assets that were shifted to passive.  Who’s going to be the buyer, when that money turns and runs?  Yeah, I don’t know either.

I hesitated a few days before sending this note, since just after writing it I was sent Michael Mauboussin of Credit Suisse’s latest piece, titled “Looking for Easy Games.”  Not wanting to look like I mirrored his work, I had to take the time to read it and be sure our ideas weren’t too similar or that I would just be repeating what he said.  They aren’t and I’m not, despite the similarity of theme (using a poker analogy to point investors towards games they can win).  That said, he had some great data. His conclusion: if you’re going to be an active investor, be REALLY active and long-term. Don’t closet index. But that doesn’t really answer the question of what games active investors can win.  And that’s where I want to dig in.

Mike McDermott: [Narrating a quote from a gambling maxim] You can shear a sheep many times, but skin him only once. – Rounders, 1998

When markets change, you need to find a way to either change with it, or be able to just fold your cards a lot. Poker pros fold many more hands than they play. Amateurs are in every hand and re-raising pre-flop with Queen-Ten. (No, this is not a good starting hand.)  But professional investors face a problem: if they fold for too long, their investors may leave them, like Ventura leaving GMO.  But many pros aren’t really able to get up from the table and find another game. If you’re known as a deep value investor, and you think most stocks are overvalued, do you change your investing philosophy and become a growth investor, or a GARP aficionado, or something else?  That’s called style drift. Asset allocators don’t like it. I know – I used to be accused of it all the time in my mutual fund days.  (In my defense, my team and I were just buying whatever was cheap, regardless of what bucket Morningstar put the stock in.  Still, it made for some interesting sales meetings.)

With the proliferation of cheap computing power and widely available data, it has become a lot harder to find games you can win. For example, when I started at Keefe, Bruyette & Woods as a bank analyst in 1994, just having the data on the banking industry gave us a huge edge. Every quarter we dutifully collected it from regulatory filings and company releases, entered it into a big database, then printed the “Bank Book.”  It was the bible for bank investors.  With that bank book alone and some time digging around, you could make good money.  Then others starting collecting the same data (damn you SNL), and computers got cheaper, and just having the data wasn’t enough. When I started my hedge fund in 1997, we had an edge – we knew small-cap banks better than 95% of the investors out there.  There were others who did what we did – but there was room for more than one shark at the table.  The market was so inefficient that there were plenty of sheep.   And then our returns sealed our fates.  We compounded at 25% per year net of all fees for 10 years.  Assets swelled.  We closed our fund to new investors, but others who were similar to us, and just as smart, kept getting assets, and suddenly our market got crowded. We killed the sheep.

Worm: [Pretending to be a sore loser at the college fraternity game] Like my uncle Les used to say “When the money is gone, it’s time to move on.”  – Rounders, 1998

We were left playing against other professionals. The game got hard, and returns suffered, so we started looking for other games. Some we were good at, and some we weren’t. It was a painful adjustment, but over time we found more sheep.  That’s the nature of markets – they move in cycles.  I think the professionals, the Einhorns and Burbank’s of the world, will adjust, and active managers will have their due.

So what are the games that can be won today?  Where are there still sheep?  I’m not going to give away all my secrets, but look for where sheep are doing things that they really shouldn’t be doing. Trading weekly options.  Buying yield stocks at any price.  Buying very high-yielding BDCs. Chasing performance in the “Trump Trades.”  If you can, just keep folding, and wait till investors panic and dump something that “everyone knows is a disaster”, like energy and bank stocks a year ago.  Then push in your chips.  In markets that are dominated by passive flows into ETFs, and especially sector ETFs, your edge may well be your ability to do nothing for awhile.

Look at these charts from Credit Suisse and tell me if you can spot the bubble.  I’ll wait. 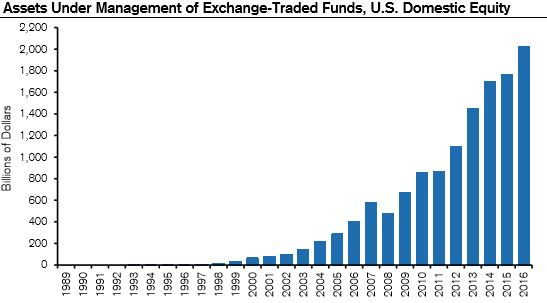 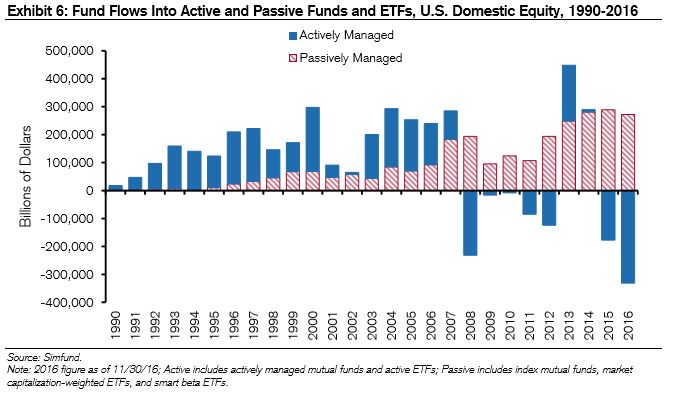 Jo: Mike, I learned it from you. You always told me this was the rule. Rule number one: Throw away your cards the moment you know they can’t win. Fold the hand. – Rounders, 1998

Right now I’m market neutral, with fairly large bets via options on a SPX decline. I increased these bets in the past few days. I am still short international sovereign debt, along with small shorts on the Italian and Chinese stock markets.  I’m leaning long in some tech companies, consumer discretionary stocks, and defense in the U.S., with a number of shorts in other sectors offsetting that. And I waiting for the moment when passive panics, and we can push in our chips again.

SPY Trading Levels: Our levels have been about spot on.  Maybe time to play smaller.