Walt Disney Company: Not A One Trick Mouse

When you think about Disney (DIS), the first thing that comes to mind is probably Mickey Mouse.

The iconic mouse does appear on much of the company’s branding,  but Disney is not a one-trick mouse. Here, I’ll show you what I mean: 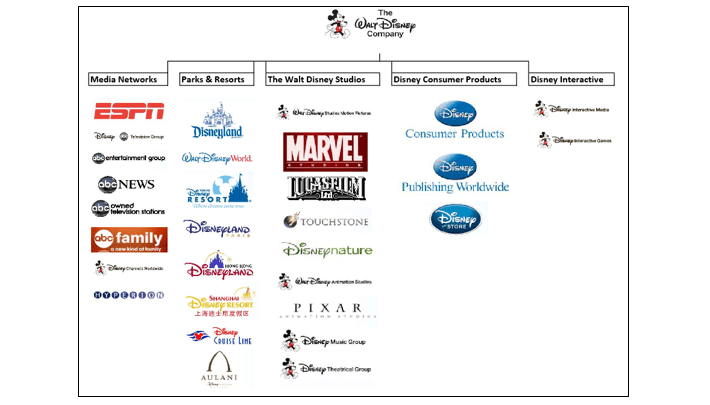 Disney owns one of the most lucrative brand portfolios on the planet.  These brands have propelled the company to a market cap of over $150 billion.  The company’s competitive advantage comes from its amazing brand portfolio.

The great thing about Disney for investors today is that you can invest in these high quality brands at a reasonable price.  This article takes a deeper look at Disney’s business and fundamentals.

In brief, the company ranks highly using The 8 Rules of Dividend Investingdue to its:

Get To Know Disney’s Business

The company operates in five (or four depending upon how you categorize it) areas of interest:

In the media segment you have networks like Disney, ESPN and ABC leading the way.

The resorts are world famous: Disneyland and Walt Disney World, along with international counterparts in Shanghai, Hong Kong, Tokyo and Paris; not to mention an entire cruise line.

On the studio side you have of course Disney, but also Marvel, Lucasfilm, Touchstone and Pixar.

And rounding out the business is the consumer products and interactive businesses.

So when you think about Disney, you may remember a nostalgic film or Mickey Mouse toy, but today the company is very much a television and parks / resorts company. Studio Entertainment makes up 14% of sales, while consumer products bring in 9% or so of revenue and the interactive component adds just 2% or thereabouts.

Collectively these five segments brought in over $52 billion in revenue last year, generating nearly $15 billion in operating profit; good for an operating margin of about 28%. The highest margin business segment was consumer products – coming in at a 39% operating margin – while the interactive segment and parks and resorts slice were the comparative “laggards.” Although to be sure all of the businesses are generating solid returns and returning healthy amounts of cash to the parent company.

If you look at the history of Disney over the last decade you will see a very clear theme: shareholders saw excellent investment performance that tracked and even ousted business results over this time period.

Here’s a look at the business performance and what happened to the stock from fiscal year 2006 through 2015:

On the top line Disney saw respectable growth – moving from about $34 billion of revenue in 2006 up to $52 billion last year; leading to an annualized growth rate of nearly 5%. Perhaps more impressive is the idea that not only were sales increasing, the quality of those sales was also improving. The net profit margin went from under 10% up to 16%, resulting in company-wide earnings growth of nearly 11% annually.

If the number of shares outstanding remain the same over the period, earnings-per-share growth will be equal to company-wide earnings growth. That wasn’t even close to the case with Disney. The company has been using billions of dollars to retire shares over the years. During the past five years alone, Disney has averaged nearly $5 billion annually going toward retiring shares. Back in 2006 there were over 2 billion common shares outstanding. Today that number is closer to 1.6 billion.

As a result of this program, earnings-per-share at Disney have been growing rather robustly – to the tune of over 13% per year. If the valuation were to remain the same from the start of the period to the end of the period, the share price growth would be equal to the EPS growth. Once again, this did not hold. Instead, the earnings multiple increased a bit allowing for over 14% annual share price appreciation for shares of Disney.

Finally, you have the dividend component which went from under 20% of earnings up closer to 40%. The starting yield was unimpressive – beginning under 1% – but the growth rate has been exceptional.

In total investors over the past nine years would have seen nearly 15% annualized gains. As a point of reference that’s the sort of thing that would turn a $10,000 starting investment into $35,000 or so after nine years. Clearly long-term shareholders have benefited to a great degree by partnering with this business.

And the reasoning is not overwhelmingly complicated: you had five major components working in your favor.First, the company was generating reasonable revenue growth that was supplemented by an improved net profit margin. From there company-wide growth was supplemented by a decrease (a material decrease for that matter) in the number of shares outstanding, to go along with a higher valuation multiple and a growing dividend.

Of course all of that is in the past. The question becomes whether or not that sort of thing is repeatable moving forward.

Below is a hypothetical scenario that provides a baseline for how you might think about this process.

The middle column is the same as above, presented for comparison purposes. The right-hand column provides the hypothetical scenario. Essentially what you’re looking for is whether or not the five major components – revenue, margins, share count, valuation and dividends – will provide a headwind or tailwind for today’s investor.

On the top line, solid revenue growth is still anticipated, perhaps in line with what was achieved previously. Granted things could turn out much better or worse, and growth becomes more difficult as you get larger, but it remains as a baseline to get you to think about the process.

I’ve seen estimates for anticipated profit margins going as high as 20%, but the above uses 18% as an assumption. On the share repurchase side you’d likely anticipate that Disney could continue to buy out a good chunk of its partners.

Today the payout ratio is much higher and the “normal” valuation does not lend itself to retiring massive blocks per amount of capital invested, but this still could be an effective repurchase program over the years. These assumptions lead to the expectations of nearly 9% annual EPS growth. Which, by the way, is about two percentage points lower than the typical analyst estimate at present.

The current valuation is represented on a trailing basis, which would be much lower if you thought about what Disney might earn this year (say $5.80 per share instead of $4.90 last year). The average historical earnings multiple during the past decade has been in the 16 to 18 range, although a good deal of that was skewed – as was the case with most securities – by the recession.

Today the starting dividend yield is nearing 2%. You’d still anticipate solid dividend growth, but perhaps not quite as fast as in the past due to the higher payout ratio and lower anticipated business growth.

Collectively, using the assumptions above, today’s investor might anticipate annual returns in the 8% to 9% range. As a point of reference, that’s the sort of thing that would turn a $10,000 starting investment into $22,000 or so after a decade should those numbers come to fruition.

Of course the actual results could be much better or worse – so an investment thesis depends greatly on your assumptions.

If you believe that Disney has hit its peak or that sales growth may begin to stagnant, you likely would not be interested in the security.

Alternatively, there is a case to be made for the above assumptions being too conservative. A lot of analysts are using growth rate assumptions of over 10%. Should the company deliver on those expectations and trade at a similar valuation, suddenly you’re looking at superior returns once more – just as past investors had seen.

In short, Disney has an exceptional stable of brands that has proven to be exceptionally lucrative for both the business and long-term shareholders.

In the past these returns were provided by a variety of components working in concert with one another. Namely, margin improvement, reduced share count and an uptick in valuation.

Moving forward you might suspect that many of the same components can have lasting value as well. The payout ratio is now higher and the company is larger, so you might anticipate that the growth rate could slow a bit.

Dividend investors often overlook Disney because its dividend yield is only 1.4%.  For investors in need of a high yield right now, that isn’t acceptable.

But low yield stocks can fit into your dividend growth portfolio – especially if you do not need large amounts of current income today.

With solid growth expectations and a low (but slowly rising) payout ratio, I expect shareholders of Disney to see dividend growth in the double-digits over the next several years.  The company’s higher expected dividend growth makes up for its lower-than-average dividend yield.