This week we start the social media parade with results from Twitter and Facebook. The two companies couldn’t have gone down more different paths over the past handful of years. Facebook is rising through the ranks to join mega cap companies such as Google, Apple and Amazon while Twitter continues to fail to turn the corner. Overall expectations for the quarter to be reported remain relatively in line with recent trends witnessed by each company.

User growth remains a key area of concern when Twitter reports second quarter results tomorrow. Investor’s waiting for this to turnaround shouldn’t hold their breath. Each day Twitter is losing out to Facebook, Snapchat and Instagram as user growth for those companies continue to soar. Advertisers have started to pull back its business with Twitter in favor of the faster growing social media channels. In trying to turn the quarter, Twitter has gone all in on live video streaming. The company recently aired special Wimbledon Coverage and both political conventions with plans to broadcast 2 NFL games this upcoming season. If these new efforts are unable to attract ad revenue, then the best case scenario for Twitter is a buyout. After Microsoft acquired LinkedIn and Verizon with Yahoo yesterday, investors are keen to a potential Twitter buyout. 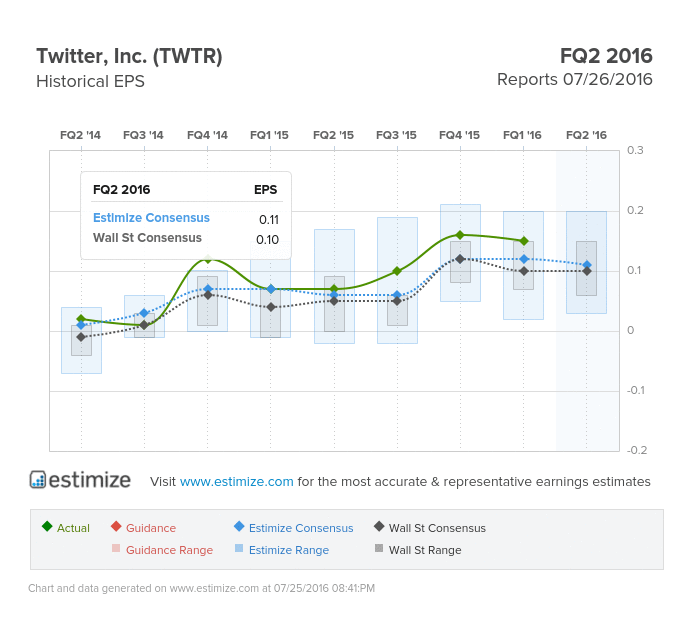 For this quarter, the Estimize consensus is looking for earnings of 11 cents per share on $608.49 million in revenue, 1 cent higher than Wall Street on the bottom line and $3 million on the top. Compared to a year earlier this represents a projected 60% jump in earnings and 21% in sales. Shares are down nearly 50% in the past 12 months, but have recovered in recent months on a potential takeover.

Lately, there are only a few names that can do no wrong in the eyes of Wall Street, and Facebook is one of them. The social media giant unsurprisingly bested its first quarter earnings with a user base that hasn’t stopped growing. The quarter featured double digit gains in monthly and active users with ad revenue growth skyrocketing over 50%. Active users should sustain their current growth levels but Facebook is more than just a social media company at this point. The company’s acquisitions of WhatsApp, Instagram and Oculus Rift have already exhibited robust growth. 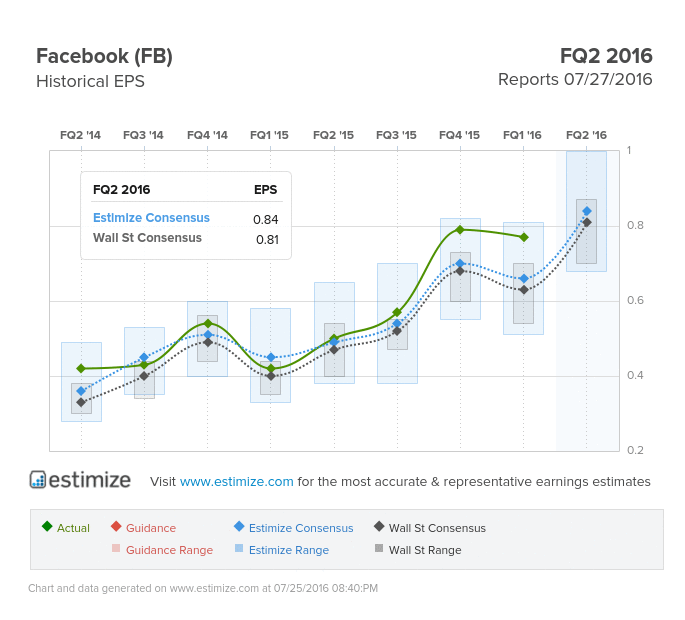 Estimize is high on Facebook to maintain its success in the second quarter. The consensus data is looking for earnings per share of 84 cents on $6.06 billion in revenue, 3 cents higher than Wall Street on the bottom line and $50 million on the top. Compared to a year earlier, this reflects a 67% increase in profitability and 50% revenue growth. In the last month, per share estimates have increased 16% and should continue to rise as we near its report date. For shareholders, strong earnings have contributed to the 50% gains in the stock.

How do you think these names will report? Be included in the Estimize consensus by contributing your estimates here!