Ambarella Inc (NASDAQ:AMBA) Looks Like a Short Ahead of Earnings

This earnings season saw many sectors suffer, particularly technology and semiconductors. These trends should continue the next few days when names like Ambarella and Broadcom report earnings. Ambarella has delivered strong earnings since its IPO in 2014 but that hasn’t been enough to please investors. In its limited time on the market, the stock has lost more than 50% of its value on decelerating growth and weak future guidance. Unfortunately, Ambarella’s success is contingent on GoPro which has posted negative revenue growth in each of the past 2 quarters.

The Estimize Consensus is calling for earnings per share of of 33 cents on $57.01 million in revenue, 6 cents higher than Wall Street on the bottom line and $1 million on the top. Compared to a year earlier this reflects a 54% decline in earnings with a 19% contraction in sales. Estimates have come down by double digits since its last report, reflecting negative sentiment towards earnings this quarter. Surprisingly though, the stock is a positive mover during earnings season. Through earnings, Ambarella shares typically increases 2%, rising to 8% gains in the month following a report. 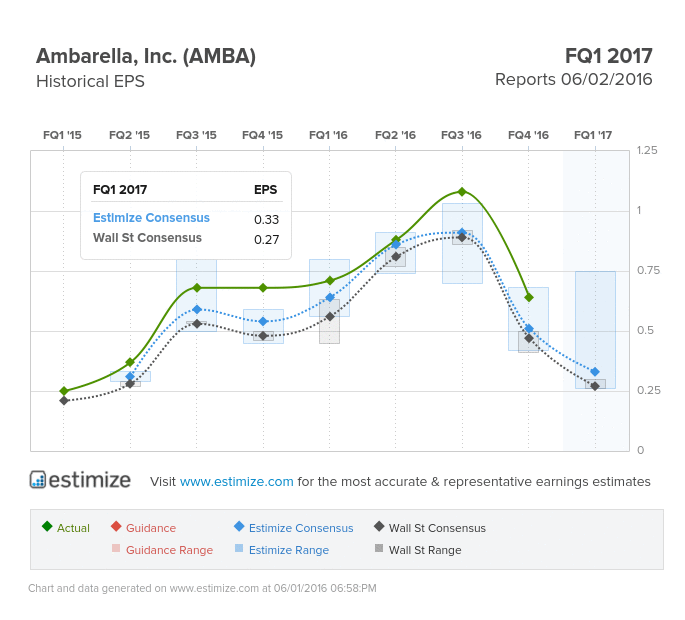 The GoPro chipmaker has had a great run since IPOing in 2014, beating the Estimize EPS consensus in all 7 quarters despite the struggles of its biggest client. However, those results started to crack last quarter, with the expectation that negative earnings growth will continue in FQ1 2017. GoPro reported earlier in the season and severely missed on the bottom line, reporting a loss per share of -$0.63, a YoY decline in profits of 363%, with revenues declining 49%.

Shares of AMBA have been in a downward spiral as well. After reaching highs of $126.70 in June 2015, shares of Ambarella have plummeted 68% in the past 12 months. Fortunately, the semiconductor is attempting to diversify its top line away from action cameras and drones and into less volatile products.

Ambarella Inc – Do you think AMBA can beat estimates? There is still time to get your estimate in here!