ValueWalk
Home Business CDS on a number of European banks now exceed that of the...

No doubt, most of our well-informed readers have heard of the poor fellow killed by a meteorite this past weekend (for those who missed it, details here). And, while most can agree that he is the most unlucky person in modern history, investors who tempted fate to try their luck on European banks are probably wishing a well-timed meteorite would put them out of their misery right about now. Developed Europe Financials are down an average of almost 9% year-to-date, making it the worst sector by more than 1% and down almost 3% more than the average European stock overall: 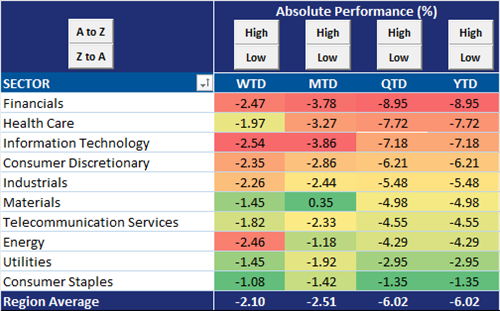 Credit default swaps (CDS) on a number of European banks now exceed that of the Emerging Markets (393 bps). Below, we have the top five (in descending order): Novo Banco, Banca Monte dei Paschi di Siena, Banco Comercial Portugues, Banco Popolare, Unicredit. For good measure, we also include the sixth highest: Deutsche Bank (233 bps). On average, these six banks have a five-year CDS equivalent to 577 bps and all are clearly back at elevated levels not seen since 2013. 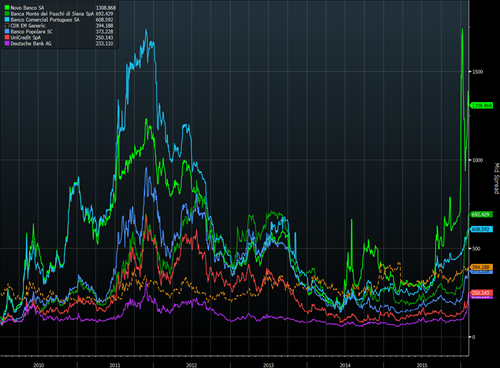 And, while some might dismiss the 100+ basis point increase in Portugese or even Italian banks’ CDS, the rise in five-year CDS on Deutsche Bank from ~96 on January 1st to 233 now is, understandably, making investors… uncomfortable.

Fortunately for us, most Financials don’t even manage to pass the preliminary screen we conduct when searching for Knowledge Leaders– they lack the required knowledge intensity, as well as (generally) carrying too much debt, and have lackluster returns on invested capital. For a detailed explanation of how we separate the Leaders from the Followers, see here).

In addition to a widespread inability to pass our quantitative metrics, European banks’ point-and-figure charts are some of the worst looking in our collection (next to Energy, of course)– and they have been for some time now. 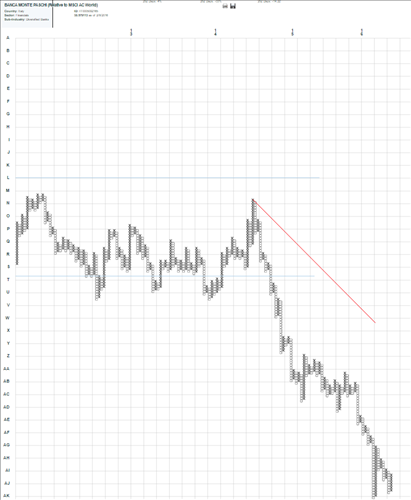 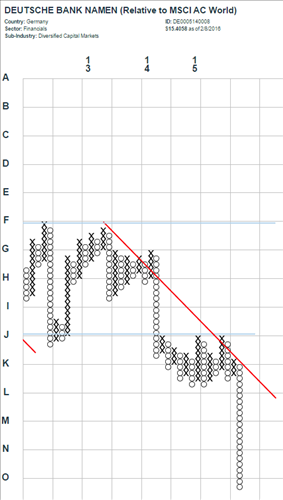 Even if these names had somehow managed to pass all of our fundamental analysis, one look at either of these relative strength charts would have sealed their fate as something to be avoided at all costs. For reason(s) yet to be fully determined (energy-related exposures? non-performing loans? regulatory effects?), the markets have voted a swift and resounding ‘no’ against this group– a consensus that seems unlikely to change anytime very soon.