ValueWalk
Home Value Investing Global Investing: Where the puck will be

“My interest is in the future because I am going to spend the rest of my life there.” – Charles Kettering.

Perhaps the most extraordinary and important presentation you will ever see can be found on YouTube, here. Dr Albert A Bartlett, Professor Emeritus at the Department of Physics at the University of Colorado at Boulder, shares his observations about the power of the exponential function – what happens when the supply of anything grows, and compounds, at a fixed rate over time. As Dr Bartlett warns,

I recently stumbled across two precious resources about the Godfather of value investing, Ben Graham. The first resource is a collection of notes from Benjamin Graham’s lectures when he was a professor at Columbia University. The notes were taken during lectures given in 1946, six years after the 1940 version of "Security Analysis" was published. Read More

“The greatest shortcoming of the human race is our inability to understand the exponential function.”

Here is an example from the world of bacteria.

“Bacteria grow by division so that 1 bacterium becomes 2, the 2 divide to give 4, the 4 divide to give 8, etc. Consider a hypothetical strain of bacteria for which this division time is 1 minute. The number of bacteria thus grows exponentially with a doubling time of 1 minute. One bacterium is put in a bottle at 11:00 a.m. and it is observed that the bottle is full of bacteria at 12:00 noon. Here is a simple example of exponential growth in a finite environment. This is mathematically identical to the case of the exponentially growing consumption of our finite resources of fossil fuels. Keep this in mind as you ponder three questions about the bacteria:

“We must realize that growth is but an adolescent phase of life which stops when physical maturity is reached. If growth continues in the period of maturity it is called obesity or cancer..”

Satyajit Das, in his latest book ‘The Age of Stagnation’, goes on to develop the thesis that our economic obsession, perpetual growth, is now an unattainable goal. One reason it is unattainable is because for the last several decades, economic activity and growth have been increasingly driven by financialization and borrowing to finance consumption and investment. By 2007, $5 of new debt was necessary to create an additional $1 of American economic activity – a fivefold increase from the 1950s. We are now drowning in debt.

There can only be three outcomes by way of resolving the debt crisis. One is for government to engineer sufficient economic growth to service the debt. In the euro zone, that outcome may be unachievable. One is to repudiate, restructure or ‘jubilee’ the debt – not easy, given that one government’s liability is another investor’s asset. The third way is the time-honoured governmental solution: official, state sanctioned inflationism – which is presumably what the (failed) policy of QE has always been about. Now that over $5 trillion of sovereign debt (with credit risk rising, not falling) trades with a negative yield, we can fairly overlook bonds as an investible asset class.

But we have to invest in something. We are also, courtesy of QE, now drowning in money and, as Josh Brown nicely points out, much else besides. In his book ‘Tomorrow’s Gold’, Marc Faber uses the analogy of a large, flat bowl perched on top of the earth. At its base, investors surround the bowl. A continuous supply of fresh water (money) flows into the bowl, controlled by the world’s central bankers. The bowl will lean whichever way investors tilt it. “..The direction of the overflow will depend on the bias of investors, which in turn can be manipulated by opinion leaders, the media, analysts, strategists, politicians and economists.” If we can anticipate where the “water” will flow, we can try to emulate as investors the sporting success of Wayne Gretzky – we can skate to where the puck will be, not to where it has been (which is what investors do by benchmarking themselves to equity indices, which reflect yesterday’s winners rather than tomorrow’s).

The map below, courtesy of the OECD, shows plausibly where the puck might be headed.

Growth of the Asian middle class; forecast: next 20 years 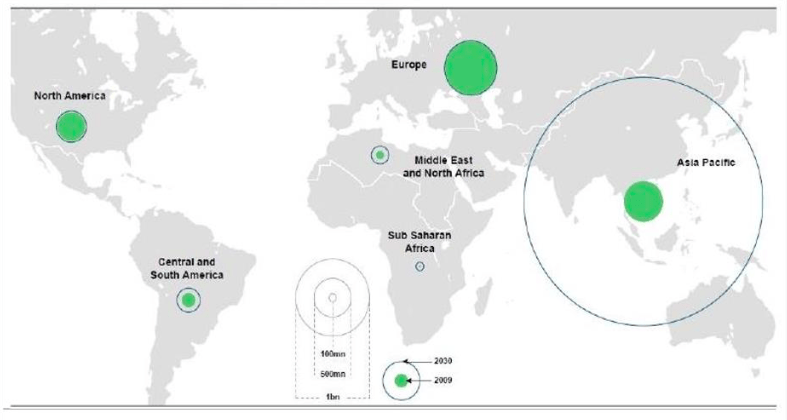 But if the OECD is correct, the middle class population of Asia is forecast to explode – from roughly 500 million people today to something like 3 billion people over the next two decades. If this comes to pass it will constitute the greatest creation of wealth in human history.

The good news is that they can.

The chart below shows the respective price / book ratios for the S&P 500 Equity Index (in red) and for the MSCI Asia Pacific Index (in blue) over the last eight years. 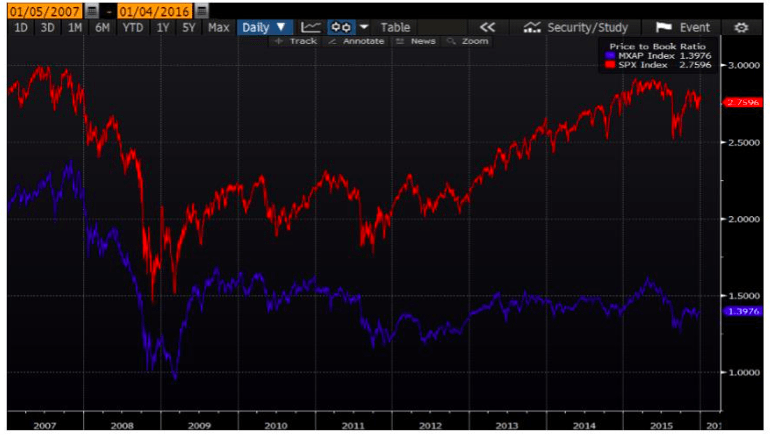 Whereas the US equity market has seen its price / book ratio virtually double since the Global Financial Crisis, the price / book ratio for Asia remains at close to its post-Lehman lows. Given the anticipated growth in wealth there over the longer term, that looks like an opportunity.

So it should come as no surprise that within our globally unconstrained ‘value’ equity fund, Asia accounts for roughly 60% of its holdings (other than China, where we currently have no exposure). And our single largest (pan-Asian) fund holding has the following metrics:

You can either buy an expensive market like that of the US (where the Shiller p/e stands at 25 times versus a long run average of 16) and where future growth may well disappoint, or you can buy high quality businesses in an inexpensive market – like that of Asia – with realistic expectations of high growth over the medium term, allied with the sort of compelling ‘value’ metrics shown above. But it’s hardly a fair fight.