In any investment I make, I do my best to seek out people, facts and analyses that challenge my investment thesis – and I make an extra effort for my largest positions and those about which I’ve been very public, as I’m especially vulnerable in these situations to what’s called “confirmation bias.”

Lumber Liquidators (NYSE:LL), my largest short position, is a good example. To try to offset confirmation bias, I regularly engage in healthy debates with numerous people regarding this company, consider every analyst report, whether bullish or bearish, read articles on this site and elsewhere, and participated in a bull-debate debate over a lunch organized by PiperJaffray last Friday.

The bull case can be summarized as follows: this whole Lumber Liquidators-is-knowingly-breaking-the-law-and-poisoning-its-customers thing is “fantastical,” nothing meaningful will happen to the company vis-à-vis regulators, customers or legal liability, earnings will rebound strongly, exceeding $3/share within a couple of years, and the stock will once again be awarded a premium growth multiple by investors, and therefore trade up to at least $75.

With the NBA regular season ending today, allow me to use a basketball analogy: the bulls think this is a touch foul while I think it’s a flagrant 2 foul, for the reasons I’ve outlined in the 12 articles I’ve published over the past six weeks. If the bulls are right, this stock is going up; if I am, this company (and stock) will be under enormous pressure for years to come.

In this article, I’d like to address two arguments I’ve heard the bulls make, both related to formaldehyde.

The Many Sources of Formaldehyde

The first is that, even if it can be shown that someone exposed to Lumber Liquidators’ Chinese-made laminate is suffering adverse health effects caused by formaldehyde, who’s to say that the formaldehyde came from the company’s flooring? After all, according to the Environmental Protection Agency (EPA), “Everyone is exposed to small amounts of formaldehyde in the air” because formaldehyde is found in:

It is a byproduct of combustion and certain other natural processes, and so is also found in:

To address this argument, I asked Dr. Philip Landrigan, who is one of the world’s leading experts on exposure to toxic chemicals and was interviewed in the 60 Minutes story, the following question:

Given all of these sources of formaldehyde, why should anyone be worried about a little bit more from Lumber Liquidators’ laminate?

It all depends on how much someone is exposed to. Substances considered toxic are harmless in small doses and, conversely, an ordinarily harmless substance can be deadly if over-consumed.

Exactly. For all the talk about the many sources of formaldehyde in a home, various studies have shown that the average American is actually exposed to very low and declining levels of formaldehyde in their home. For example, regarding one of the main sources, pressed-wood products, the Consumer Product Safety Commission notes that:

And here’s an excerpt from a report by the Centers for Disease Control and Prevention, Formaldehyde Exposure in Homes, that cites four studies from 1985, 1999, 2000 and 2005 showing sharply declining formaldehyde levels in the average home over time:

An early U.S. study conducted in 1985 investigated formaldehyde levels in different types of housing. That study demonstrated that formaldehyde levels in 38 conventional U.S. homes averaged 40 parts per billion (ppb) with highs of 140 ppb. Nineteen apartments and 11 condominiums were also studied and had formaldehyde levels averaging 80 ppb and 90 ppb, respectively, with highs of 290 ppb (Stock & Mendez, 1985). A more recent study of new homes found the geometric mean formaldehyde level was 34 ppb in manufactured homes and 36 ppb in site-built homes (Hodgson et al., 2000). This study also suggested that formaldehyde concentrations in conventional homes have decreased greatly since the 1980s due to decreased use of plywood paneling and reduced emissions from the composite wood products used.

In another study conducted by the US Environmental Protection Agency (EPA), the National Human Exposure Assessment Survey found 189 Arizona homes had a median formaldehyde level of 17 ppb with a high of 332 ppb. (Gordon et al., 1999) The most recent study of 184 single family homes in different several cities (RIOPA, 2005) found a mean concentration of formaldehyde in outdoor ambient air of 3 ppb and in housing of 17 ppb. That same study found a mean level of formaldehyde for mobile homes or trailers ranging from 15.5 to 24.7 ppb.

In short, the most recent study found the “mean concentration of formaldehyde…in housing of 17 ppb..(and) a mean level of formaldehyde for mobile homes or trailers ranging from 15.5 to 24.7 ppb.” (Note that this study is a decade old, so levels are likely even lower today.)

This trend of declining formaldehyde levels in the average home is a testament to the effectiveness of strong environment regulation and is great news for American families.

But it’s not great news for Lumber Liquidators because the formaldehyde emitted by its Chinese-made laminate flooring is many times higher: 57, 93 and 268 ppb, according to the three emissions tests 60 Minutes commissioned (posted here).

Thus, assuming additional testing is consistent with these results, I think most reasonable people (including, most importantly, regulators, judges and juries) would conclude that when someone exposed to Lumber Liquidators’ Chinese-made laminate suffers symptoms consistent with breathing in excess levels of formaldehyde, the flooring is to blame.

What Indoor Air Limits Regulators Are Likely to Set

Another, related, argument bulls make is that even if the three emissions tests 60 Minutes commissioned are representative of all of Lumber Liquidators’ Chinese-made laminate, who’s to say that 57, 93 and 268 ppb are dangerous levels? After all, there is no national law setting a limit for formaldehyde in indoor air – rather, various regulators have come up with vastly different numbers, as this table shows:

[1] NIOSH Pocket Guide to Chemical Hazards, September 2005 (NIOSH is the National Institute for Occupational Safety and Health, a division of the Centers for Disease Control and Prevention)

(9 micrograms per meter cubed = 7 ppb, which is the figure I used in my article, A Response To Lumber Liquidators, when I wrote: “Lumber Liquidators claims that ‘The emissions from our laminate floors will typically only add approximately 5 ppb to a home when first installed.’ If true, this would be good news since regulators have set 7 ppb as the limit to protect everyone, including children.”)

2) COEHHA, in another document (see page 5), sets formaldehyde limits of 40 micrograms per meter cubed [33 ppb] for “No Significant Risk Levels (NSRLs) for Carcinogens.”

3) The California Air Resource Board (CARB), in a 2004 report entitled Formaldehyde in the Home, notes that adverse health effects begin at 40 ppb and, in addition, citing a study by COEHHA, concluded that:

For an eight-hour exposure time, no short-term adverse effects would be expected to occur if average levels do not exceed 27 ppb (OEHHA’s interim 8-hour REL).

However, people often spend more than eight hours a day in their homes; infants, young children and the infirm sometimes spend virtually the entire day inside their home. Thus, it is highly desirable that residential levels remain well below 27 ppb to avoid acute effects in such individuals. To avoid irritant effects, air concentrations in new homes, including manufactured homes, also should not exceed 27 ppb.

(Note that a 1991 report by CARB, entitled Formaldehyde in the Home, Indoor Air Quality Guideline No. 1 and Supplement, set 100 ppb as an “action level” and 50 ppb as a “target level,” but this has been superseded by the 2004 CARB report.) 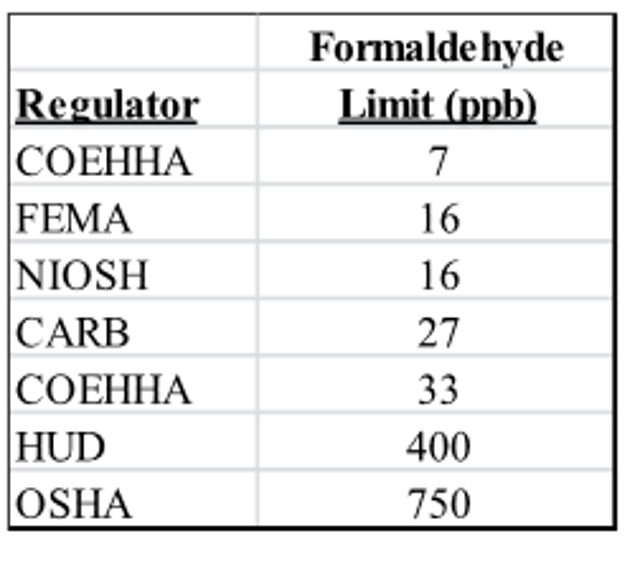 Recall that the three samples of Lumber Liquidators’ Chinese-made laminate that 60 Minutes had tested came in at 57, 93 and 268 ppb, so depending on which standard one uses, one could conclude that the laminate is far (8-38 times) above a safe level of 7 ppb – or that’s it’s well below the HUD and OSHA levels, so it’s likely fine.

What should we conclude? And, more importantly, after numerous federal regulators such as the Consumer Product Safety Commission and EPA finish emissions tests on Lumber Liquidators’ Chinese-made laminate, what are they likely to conclude?

My view is that regulators are highly likely to set a national standard somewhere in the range of the very low levels established by COEHHA, CARB, NIOSH and FEMA for six reasons:

1) The HUD and OSHA standards are very out of date: the former was established 30 years ago in 1985 and the latter was last revised 23 years ago in 1992. Since then, the science on formaldehyde has improved dramatically, and there’s now far greater awareness of its dangers (it’s been established as a known carcinogen, among other things), which are reflected in the more recent and much lower levels set by other regulators.

2) The OSHA standard is for a workplace (i.e., adults, eight hours per day) whereas, for flooring, regulators will be concerned about babies and children in homes pretty much 24/7.

3) There are five data points between 7 and 33 ppb – and two extreme outliers. Where do you think regulators are likely to set the national standard?

4) Note that the maximum formaldehyde levels in the table above are for all formaldehyde in indoor air, not just from flooring, so when regulators set a level for flooring only, they are likely to pick an even lower number.

5) The regulatory agencies looking into this are part of a Democratic administration that’s been very strong on environmental issues.

6) Given that there will always be some level of ambiguity – it’s not like anyone can definitively say “15 ppb is safe, but 16 isn’t” – I can’t think of any reason why an agency charged with protecting consumers would want to take any risk.

My answer: they won’t. I think regulators are almost certain to set a standard in the 7-33 ppb range (probably much closer to the low end), which means all three Lumber Liquidators samples 60 Minutes had tested are far out of compliance. Assuming the regulators’ tests show similar results, it’s unclear what actions they might take, but I suspect they’ll be very onerous for Lumber Liquidators – and its stock.

PS – I don’t read the message boards for the articles I publish, but I do want to hear thoughtful comments and questions so I invited my readers to communicate directly with me via Seeking Alpha messaging. I will post my answers on the message board.