Tax season may be over, but that doesn’t mean that the IRS has stopped looking for tax cheats. The personal finance website WalletHub compiled a veritable mountain of recent IRS-related statistics to create the 2014 IRS Audit Guide. WalletHub dug through years worth of historical IRS data to analyze how audit rates compare across tax brackets as well as between individuals and small and large businesses. They also analyzed historical audit results and tax crime conviction and incarceration statistics, as well as the recent organizational history of the IRS enforcement division.

Wallethub discovered that for 2013, individual taxpayers have around a 1% chance of being audited. Furthermore, the audit rate has dropped over 9% since 2010. The data also showed that mall businesses have about 1% chance overall of being selected for an audit.  The report also highlighted that the small business audit rate has zoomed up by 17% since 2009. Finally, large corporations are reported to have a 15.8% overall chance of being audited. The audit rate for larger corporations has increased by around 8.6% since 2009.

Interestingly, only 11% of individual audits over the last few years has resulted in no additional tax obligation. On the other hand, 28% of small business audits and 27% of large corporation audits resulted in a finding of no additional tax obligation. The report also points out that the number of IRS agents involved in Examinations, Collections and Investigations has dropped by over 12% since 2010. Part of the reduction in manpower is due to IRS budgetary restrictions, but information technology has also greatly increased the efficiency of IRS enforcement efforts. This means the IRS can “do more for less” today.

Last but not least, the annual number of incarcerations for tax crimes has increased by more than 117% in the decade between 2003 to 2013. 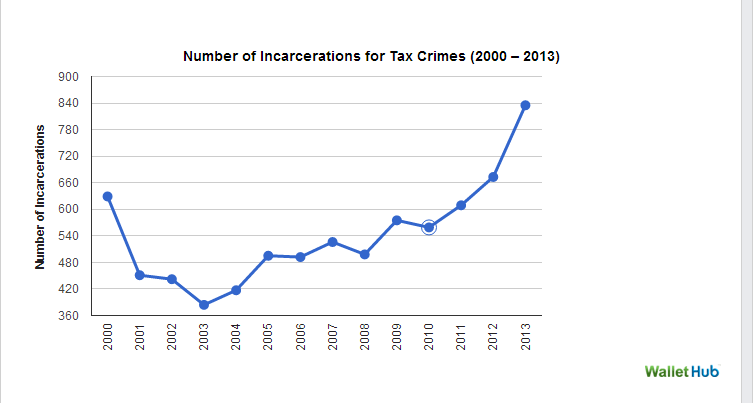