Edward Lampert recently reported his latest 13F filing. During Q4, he made relatively few changes to his portfolio. Nevertheless, its size decreased to $3.4 billion from $2.5 billion in Q3.

The founder and CEO of ESL Investments, Lampert has largely made his investment name in retail. He orchestrated the merger of Kmart and Sears to form Sears Holdings Corp (NASDAQ:SHLD), of which he is now chairman and CEO, in 2005.

The billionaire initiated no new positions during Q4.

Edward Lampert boosted his stakes in classic American retailer The Gap Inc. (NYSE:GPS) last quarter and is awaiting the company’s earnings report, slated for Thursday. The Gap has beaten EPS estimates for the past four quarters.

Lampert initiated a 2.8-million-share position in GPS in December 2010 and now owns more than 6.5 million assets (10.62% of his fund). Other billionaires with a position in the retailer are Steve Mandel, Ray Dalio and Chase Coleman.

Sears Holdings Corp (NASDAQ:SHLD) is Lampert’s largest holding. However, the billionaire scaled back his position in Q4, selling 7.4 million shares at prices between $44.10 and $65.80. He now holds 26 million SHLD shares – 52% of his portfolio. Bruce Berkowitz owns 24.8 million assets.

Lampert also unloaded 3.6 million shares of AutoNation, Inc. (NYSE:AN). He still holds 15.7 million AN assets, his second-largest allocation and composing 31.43% of his fund. Lampert has held a stake in the company for over 20 quarters but has been selling since June 2011.

Just as Edward Lampert didn’t buy any new stocks in Q4 2013, he didn’t sell any either.

Take a look at how the billionaire’s four main equity positions have performed YTD: 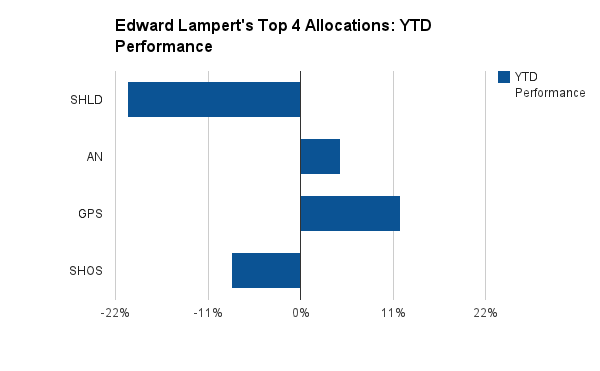