Hottest links for Saturday and Sunday, 4th-5th January, the weekend edition (see Tuesday’s edition of hottest links). Get our free daily newsletter (the updated version) and never miss a single linkfest. Also, now if you sign up you will get our new e-book on value investing.

Top stories for today are below. Lots of important lessons for investors; Do not underestimate the biggest risk of the year – recency bias; Guess what the worst asset classes were over the past 10 years? Not stocks, not treasuries, not even EM stocks but…. cash and commodities; On the lighter side…  Man gets so bored of X-Box that he asks to go back to prison; That and much more below.

The Biggest Risk in 2014: Recency Bias

The biggest risk in 2014 is likely to be a common one – recency bias.  Otherwise known as your own brain’s tendency to focus excessively on things that have only just occurred. [Cullen Roche, Pragmatic Capitalism]

The Law of Large Numbers and Casino Earnings

The Law of Large Numbers does not tell you that the average of your throws will approach 50% as you increase the number of throws; simple mathematics can tell you that, sparing you the tedious business of tossing the coin over and over. [David Foulke, Turnkey Analyst]

Although, to a believer in the Efficient Market Hypothesis, Buffett’s not supposed to even exist – a fact which both Buffett and Charlie Munger derive quite a bit of humor from. [Joshua M Brown, The Reformed Broker]

Long-Term Thinking died on Tuesday. His last true friend, Vanguard founder Jack Bogle, was at his side. He was 213 years old. [Morgan Housel, The Motley Fool] 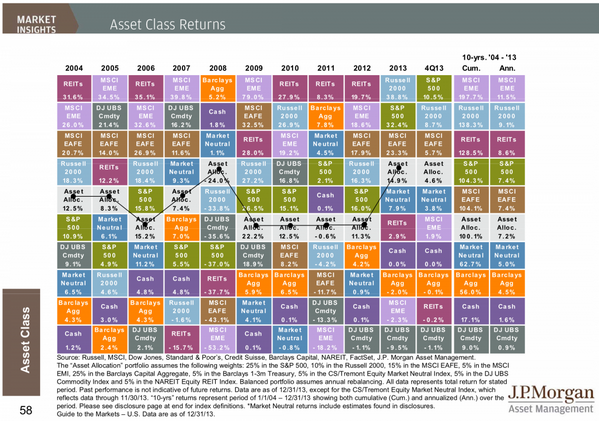 Vanguard took in $117 billion in long-term mutual fund and ETF assets during the first 11 months of 2013, according to Morningstar‘s just-published-and-not-quite-finalized 2013 fund flow figures. The number for the entire industry was $425 billion. [Brendan Conway, Focus on Funds]

When most US investors do not like the way a company is heading, they vote with their feet and sell their shares. [Brooke Masters, FT]

In the past, Third Point’s outspoken chief Dan Loeb contained his tongue-in-cheek Bloomberg header “aphorisms” only to personal “relationships” such as Bill Ackman or Bill Ackman. This time around, he has some New Year cheer for everyone! [Tyler Durden, Zero Hedge] Related: Dan Loeb, the activist hedge fund manager, closed last year with a +24% return after gaining +2.2% in December. The aggressive investor has several positions to thank for this performance. [Tabi Hussain, ValueWalk]

Newspapers report the news. They should never aim to be part of the story themselves. But in the stock market, that division is hard to sustain. [John Authers, FT]

The closer scientists look, the clearer it becomes how much we’re like animals. We have dog brains, basically, with a human cortex stuck on top, a veneer of civilization. [Tom Brakke, Research Puzzle]

Davis Polk & Wardwell LLP has decided to do just that for its mega-banking clients to start off the new year, giving them a handy, color-coded, “user-friendly” flow chart to help them navigate the Volcker rule, which restricts banks from making market bets with their own capital. [Jon Shazar, Deal Breaker]

A Whangarei man who was “sick of playing Xbox” while on home detention has been granted his wish to serve the rest of his sentence in jail. [Mike Dinsdale, The Northern Advocate]