Hottest links for Thursday, January 23rd, the late edition (see Wednesday’s edition here). Get our free daily newsletter (which HAS BEEN RECENTLY UPDATED) and never miss a single linkfest. Also, now if you sign up you will get our new e-book on value investing.

Top stories are included below.  A plethora of stories today!  We’ve got asset allocations for January, the Great Bull Market Of 2009-2013, and Michael Steinhardt getting back into the game.

Pavlov’s Margins – Thinking, Fast and Slow in Business and Investing

Daniel Kahneman is the father of behavioural finance. Surely, by now you’ve read his book, Thinking, Fast and Slow – if you haven’t, drop everything, go to Amazon right now and slap yourself after purchasing it for being so slow to obtain this masterpiece in the first place. [The Odd Lot]

“Good To Great” seeks to answer the question, “Why do some good companies become great companies in terms of their market-beating stock performance, while competitors stagnate or decline?” [Valueprax]

The recognition of that truth hasn’t stopped anyone from trying, as noted in the Bloomberg News story earlier this week: Hedge Funds’ Assets Increase 17% to Record $2.63 Trillion. Hence, the romancing of alpha continues even if it means forsaking beta. [Barry Ritholtz, The Big Picture] Overall, fund managers remain very bullish on risk. In September, exposure to global equities was the second highest since the survey began in 2001; it is only marginally lower now and it has increased every month since October. [Ukarlewitz, The Fat Pitch] 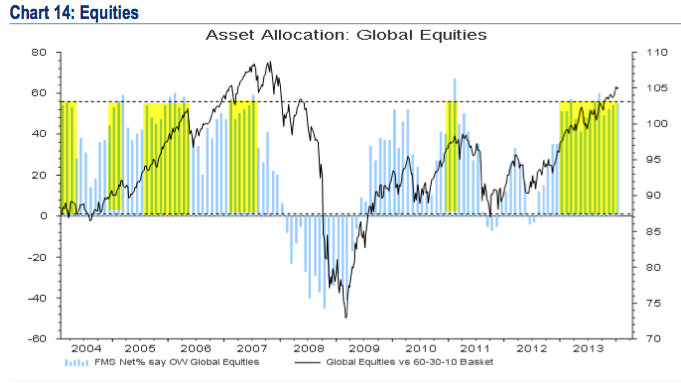 Hougan: Biotech ETFs In A Bubble

The question of whether biotech is in a bubble has been top of mind for me over the past few weeks. The SPDR S&P Biotech (ETF) (NYSEARCA:XBI) is up 75 percent in the past year, and more than 15 percent year-to-date. [Matt Hougan, IndexUniverse]

Active is the New Passive

There are seven major arguments being put forth for why this should be the case now (as summarized by Bank of America Merrill Lynch): [Joshua M Brown, The Reformed Broker] Does the Small-Cap Premium Exist?

It is intuitive to presume that small-cap stocks should outperform their large-cap counterparts over the long run. After all, small caps do tend to have more limited financial resources, weaker competitive advantages (if any), and lower profitability than large caps. [Alex Bryan, Morningstar] 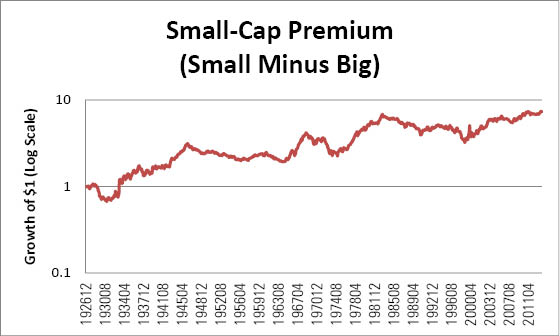 Shifts in Art Market at Center of Loeb-Sotheby’s Debate

Daniel S. Loeb is wrestling with Sothebys (NYSE:BID) over a new art paradigm. Mr. Loeb, the founder of the hedge fund Third Point, is essentially estimating the the auction house should be more like its privately held archrival Christie’s. [Richard Beales, DealBook]

Why the Wild West analogy? Its still the early days for liquid alternatives and the level of innovation is high. Assets are flowing rapidly into the space. [Brian Haskin, DailyAlts]

Exchange-traded funds (ETFs) started out linked at the hip to low-cost, market-tracking index funds. The only ETFs available during the 1990s were those that followed well-known benchmarks such as the SPDR S&P 500 ETF Trust (NYSEARCA:SPY) and the NASDAQ-100 (INDEXNASDAQ:NDX). That’s no longer the case. [Rick Ferri, Index Universe]

Bill Gross To El-Erian: ‘Hell No, You Can’t Go’

Bill Gross, chief investment officer of PIMCO, told Bloomberg News in an interview that he was shocked and discouraged to hear that PIMCO CEO Mohamed El-Erian would be departing the firm in March. [Matthew Boesler, Business Insider]

International Business Machines Corp. (NYSE:IBM), to IBMers, always stood for “I’ve Been Moved,” a reference to the way Big Blue moved employees around the country and around the globe to get experience as they worked their way up the ranks. [Jeff Matthews, Jeff Mathews Is Not Making This Up]

Levine on Wall Street: The Magic Power of Bitcoin (and Dogecoin)

I am sort of a Bitcoin skeptic, and Marc Andreessen is definitely talking his book here, but this is a pretty good articulation of how Bitcoin could have a future as a payment system. [Matt Levine, Bloomberg]

Wells Fargo & Co (NYSE:WFC) said on Wednesday that it sold the rights to service 184,000 mortgages to the Ocwen Financial Corp (NYSE:OCN), a rapidly expanding company known for its expertise in dealing with subprime borrowers. [Michael Corkery, DealBook]

The Securities and Exchange Commission’s dispute with the Chinese units of major global audit firms, culminating in an administrative law judge’s ruling Wednesday, has its roots in a wave of alleged accounting improprieties at U.S.-traded Chinese companies in recent years. [Michael Rapoport, MoneyBeat]

AlphaMetrix: We did nothing wrong!

On Dec.24, 2013, AlphaMetrix Group stakeholders received a little present in their e-mail boxes. The email was sent through [email protected] and not a corporate account: [Ginger Szala, ALlAboutAlpha.com]

Michael Steinhardt forged the model for making hedge fund billions before exiting the game. With WisdomTree, he’s back to upend Wall Street again–this time, with the little-guy investor at his side. [Michael Noer, Forbes]

9% Alpha with Munger and Van Gogh

So, for the 13F detractors out there, this is now 5 years of out of sample performance.  4/5 years the portfolio beat the S&P.  Total outperformance?  9% per year.  That’ is monster outperformance! [Mebane Faber]

Ms Salaman, who argues apostrophes can be key to conveying the meaning of a street name, said she hoped a campaign could be launched to get councils to change their minds. She said: “I thought I was one of a few old-fashioned sticklers but I’ve been overwhelmed by the number of people who have got in touch with me saying we should be promoting the use of the apostrophe, not getting rid of them.  [Chris Havergal, Cambridge News]