Hottest links for Monday, 16th December, the weekend edition (see weekend’s edition of hottest links). Get our free daily newsletter (which HAS BEEN RECENTLY UPDATED) and never miss a single linkfest. Also, now if you sign up you will get our new e-book on value investing.

Top stories for today are included below.  We’ve got some holiday-themed stories today, including which hedge funds have been naughty and nice, JPMorgan’s attempt at a bitcoin- alternative getting rejected, and a few options for beating the seasonal herds.

We have recently added a new category that shows some of our favorite sites. Check it out here, also feel free to make suggestions.

Investors love chasing returns, always to their detriment.  The best place to be allocating likely is the worst performers over the past 3-5 years. [Mebane Faber]

“The cheaper you buy, the greater the potential investment reward.”  This is a simple idea which many investors do not understand since they are driven to buy when “Mr. Market” is euphoric since the human instinct is to follow the crowd. [Tren Griffin, 25iq]

Our profession certainly takes a hit when it comes to media attention. Negative stories on the Bernie Madoffs of the world get center stage and Hollywood projects us as a sinister industry through the lens of movies such as Wall Street and Boiler Room, while the extensive public good as a result of our services goes without mention.  [Jonathan Henschen, ThinkAdvisor]

As we covered last week, odd lots (trades of less than 100 shares) began reporting to the public data feeds on Monday, December 9th. Nanex broke down the opening day data, and according to them 17.4% of all trades for the day were odd lots. [Floating Path]

Hedge funds are coming to the end of a fifth consecutive year of underperforming the S&P 500 (INDEXSP:.INX). The Federal Reserve’s stimulus programme pushed the index up 29.1% this year through November, leaving the average hedge fund, which is up 8.31% this year, trailing. [Harriet Agnew, Financial News]

Earlier in the week, we detailed JPMorgan Chase & Co. (NYSE:JPM)’s attempt to create their own “web cash” alternative to Bitcoin (and Sberbank’s talk of doing the same). However, as M-Cam details, following the failure of the first 154 ‘claims’, JPMorgan issued a further 20 claims – which were summarily rejected. [Tyler Durden, Zero Hedge]

Explore the different areas of Inflation Island, see how people react to inflation and deflation, and how the scenery changes. You can also test your knowledge and try to identify the different inflation scenarios. [European Central Bank]

Gold ETF Exodus is the Fastest on Record

If beating the seasonal herd means buying this week or next, the other good news is that plenty of CEF prices are at fresh lows and even multi-year lows. Friday’s NYSE new 52-week low list was littered with CEFs, including a slew of muni funds. The group included Blackrock Muniyield Fund Inc. (NYSE:MYD) and Nuveen Div. Advantage Muni. Fund (NYSE:NAD). [Brendan Conway, Focus on Funds] 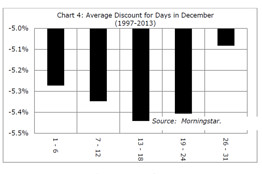 Back in 1999, many of the companies that were trading at $100-$1000 had earnings of less than 0.50 cents per share. Some had no earnings and the metrics analysts used to value them were “clicks” and “eyeballs.” When you look at many of today’s high-priced stocks (Mastercard Inc (NYSE:MA), Google Inc (NASDAQ:GOOG), Priceline.com Inc (NASDAQ:PCLN), Apple Inc. (NASDAQ:AAPL)), these companies are earning $30-$50 dollars per share! BIG DIFFERENCE! [Joseph Fahmy, Joe Fahmy] Related; In the aftermath of the financial crisis, the term “bubble” has come into wide use in the financial press. The stock market bubble: [David Foulke, Turnkey Analyst]

On December 11th 2013, Magix AG (ETR:MGX) (FRA:MGX) announced another  tender offer for 9% of outstanding shares at a share price of EUR 3.0, indicating that the management regards the current stock price as too low. [Wetart Capital]

TravelCenters of America LLC (NYSE:TA) was profitable and on the rise in 2011 and 2012 but in 2013 they have started to slide again and the board believe it’s due to the volatility in the fuel prices early in 2013 and the adverse financial position and overall activity in the trucking industry. [Shailesh Kumar, Value Stock Guide]

We wanted to share this amended 8-K filed by Groupon Inc (NASDAQ:GRPN) after 5 pm on Friday. In it, the company corrected a mistake that it made nearly a year earlier, when it filed this 8-K outlining long-term equity awards, in the form of RSUs, to four of its top executives. [Footnoted]

A familiar name to readers of this site was leading the pack of top gainers for a bit last Thursday and the reason was a bit surprising. Exelis Inc (NYSE:XLS), a defense contractor freshly spun out of ITT Corp (NYSE:ITT), announced that it would pursue a spinoff of its own by separating its military and government services business into a standalone unit. [Spin Doctor, Stocks Spinoffs]

We’ve heard of people stealing money so that their family can eat, but this Japanese man took this took this to a whole different level – he went on a year-long stealing and burglary spree, making off with a total of US$185,000 (over 19 million yen) just to feed 120 cats – and not just ordinary cat food, but to keep them on a gourmet diet, this revealed by Japanese police on Thursday. [John Hofilena, JDP]