Hottest links for Wednesday, 11th December, the late edition (see Tuesday’s edition of hottest links). Get our free daily newsletter (which HAS BEEN RECENTLY UPDATED) and never miss a single linkfest. Also, now if you sign up you will get our new e-book on value investing.

Top stories for today are included below.  We’ve got a double dose of links today, with news coming in from all corners.  There’s a bevy of commentary on the Volcker Rule, more back-and-forth on bubble/QE/tapering chatter, Buffett tap-dancing his way to work every day, as well as something practical – a ranking of the 15 best financial sites and apps for your smartphone.

Warren short sold cocoa futures in a special situations deal as far back as 1954. He also got into insurance to access the float and not need to borrow from prime brokers. During due diligence, I found so-called “first” hedge fund A.W. Jones mostly front ran analyst upgrades so was NOT skill-based and would be illegal today. [Hedge Fund]

This has been my best prediction for the past two years and I see no reason not to go for a three-peat, although each year there’s a greater chance it will be proved wrong. Even though he will turn 84 in August, Buffett is showing no signs of slowing down and still says “I truly do feel like tap-dancing to work every day.”  [Alex Crippen, CNBC]

Five years later, the most ironic part of Bernard Madoff’s legacy is clear: After his Ponzi scheme made hedge funds seem scary, especially to individual investors, the industry got busy making them seem safe enough for everybody. [Jason Zweig, MoneyBeat]

Maybe the real problem is that markets are no longer doing what they’re supposed to do. As mechanisms for allocating capital, markets are broken. Maybe that’s the issue. [Michael J. Casey, MoneyBeat]

Here’s Jeff Saut, from his latest market commentary as chief strategist of Raymond James: Indeed, L. Frank Baum’s Wizard of OZ was penned in 1900 following unrest in the agriculture arena (read: farmers) due to the debate over gold, silver, and the dollar standard. The book, therefore, is supposedly an allegory of these historical events making the information easier to understand. [Joshua M Brown, The Reformed Broker]

We’re left with a sentiment bubble – if not fully formed then certainly one in the making. It’s like the adrenaline surge people get from near-death experiences, a mass realization that things are turning out okay despite half a decade of misery and trauma. …and the chart, via Greedometer, who is unapologetically calling this a bubble: [Joshua M Brown, The Reformed Broker] Is This QE Rally Getting Overdone….??

I’ve had all sorts of people tell me about how QE means that the market goes up forever—as if this were simply a guaranteed fact. Many of these people were the ones fretting about 2009 and selling at the lows. [Kuppy, AdventuresInCapitalism] 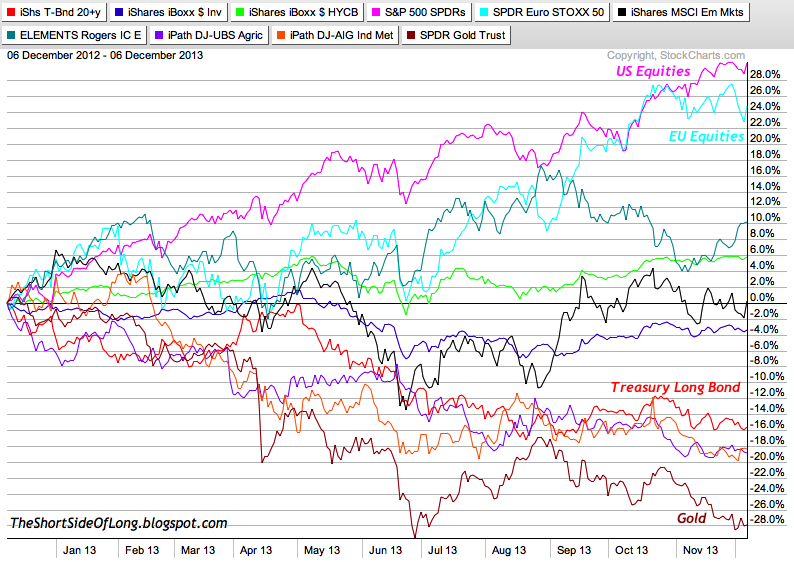 Missed It By *This* Much

It’s part of the gig. A Wall Street strategist, economist or even a run-of-the-mill investment manager gets a crack on financial television and is asked about his or her forecast for the market. Firm / S&P 500 (INDEXSP:.INX) Target / Missed it by this much (%, as of 12.10.2013) [Robert Seawright, Pragmatic Capitalism]

Dogs and Cows of the Dow: Dividends and Buybacks

I thought this would be a fun way to visualize the Dow stocks, and how they distribute their cash through dividends and buybacks. [Mebane Faber]

The Internet is going wild over a recently discovered patent application filed by JPMorgan Chase & Co. (NYSE:JPM)  for a digital-payment network that it describes as “a computer-implemented method of providing an anonymous payment.” [Saumya Vaishampayan, The Tell]

A buying opportunity has emerged in emerging markets

Ten years into my hardcore investing obsession, I’m still surprised how predictable investors can be. Take the cycle of fear and greed, for example, and put emerging markets in for spin. [The Investor, Monevator]

How to Manage Your Money: What to Do If You Think You Have an Edge

You may be in the very small minority of people where this is the case, but if you are going to claim an edge and actively manage your own portfolio, I would encourage you to consider a few things. [Lars Kroijer, CFA Institute]

Investors have pulled $70.7 billion from U.S. bond mutual funds through the first week of December, according to TrimTabs Research. That’s bigger than the $62.5 billion outflow during 1994 — a year when the Federal Reserve increased rates and put the bond market’s three-decade bull on a pause. [Brendan Conway, Focus on Funds]

Hedge fund managers live and die by their performance. Their profit and loss numbers show whether they made or lost money. But are performance figures an accurate measure of success? [Harriet Agnew, Financial News]

Hedge fund managers seek to set themselves apart through branding

Hedge fund branding is increasing as institutional investors’ presence within hedge funds’ client bases is forcefully nudging even the most tight-lipped firms to open up and explain what they do. [Christine Williamson, Pension&Investment]

While activist investors are loud for a living, the majority of hedge fund managers prefer to keep quiet, though that looks to be slowly changing. This year, 45% of the largest firms in the Americas use an external public relation firm,, up from 36% a year ago, according to the second annual Absoulte PR Rankings. [Amal Robleh and Simone Foxman]

It’s easy to get cynical about Carl Icahn’s announcement that his publicly-traded investment vehicle, Icahn Enterprises, is selling 2 million shares to investors. [Nathan Vardi, Forbes] Related; If Carl Icahn is selling, do you want to be buying? Probably not. Partnership units of Icahn Enterprises LP (NASDAQ:IEP), the investment vehicle controlled and managed by the billionaire, are down $13, or nearly 9%, to $135.53. [Andrew Bary, Barron’s]

Who met most with regulators to try to shape the Volcker Rule?

Today, five agencies are set to approve a final version of the so-called “Volcker Rule,” a provision in the Dodd-Frank bill intended to prevent banks from engaging in “proprietary trading” – basically trades that benefit the banks but not their clients. [Lee Drutman, Sunlight Foundation]

Banks have been shedding units that might offend the rule over the past few years, and some of their most talented traders have begun moving to hedge funds. And that’s only the beginning, according to Apollo Global Management LLC (NYSE:APO)’s Marc Rowan. [FINalternatives]

Paul Volcker said he wasn’t involved with writing the final version of the rule that bears his name, staying abreast of developments from a distance as regulators crafted details of his curbs on trading by banks. [Yalman Onaran, Bloomberg]

On Tuesday, regulators approved the long-awaited Volcker Rule. The final rule, which was also unveiled on Tuesday, was widely expected to be stricter than originally proposed. And in some ways it was.  [Stephen Gandel, CNNMoney]

Mr. Weinstein launched his own hedge fund well before the Volcker rule was being considered, but he spent a good portion of his career on Deutsche Bank AG (NYSE:DB) (ETR:DBK) prop-trading desk and reportedly earned between $40 million and $70 million in certain years. [Maureen Farrell, MoneyBeat]

Who Has The Last Word On “Network” Audits

On December 4 the PCAOB re-proposed a rule to require public companies to disclose the engagement partner’s name for the most recent period’s audit and the names, locations, and extent of participation of other public accounting firms that supported the completion of the audit. [Francine McKenna, re: The Auditors]

Is Ed Snowden our mockingjay?

We are five years into the Crisis that will not resolve itself until sometime in the 2020’s. No one can predict the specific events that will fundamentally change history over the next decade, but the catalysts of debt, civic decay and global disorder were evident sixteen years ago when Strauss and Howe wrote their prophetic generational history. [Tyler Durden, ZeroHedge]

Why CEO’s pay so much for deals?

EPS accretion “myth” is the cornerstone of much public company analysis, with the E in EPS often heavily adjusted to remove all “bad” things (non-cash PPA, restructuring, deal expenses, etc.) [Corner of Berkshire and Fairfax]

Meth is for quitters

23-year-old Tyler Renton was the subject of several calls to local police after he was seen swerving down the road, crashing into garbage cans and even uprooting a tree when he missed a turn. .” When advised he should consider a methadone program, Renton said, “I will never do methadone. Meth (methadone) is for quitters.” Right. [Brandon Turkus, autoblog]