Hottest links for Tuesday November 26th, 2013 the late edition (see Monday’s edition of hottest links). Get our free daily newsletter (which HAS BEEN RECENTLY UPDATED) and never miss a single linkfest. Also, now if you sign up you will get our new e-book on value investing.

Top stories for today are included below.  Some very interesting stories today, including a piece about how individual investors start at a big disadvantage, more on the Men’s Wearhouse deal, Hugh giving up short-selling, and a Chuck Norris joke come to life.

It always surprises me when people have not heard of The Leuthold Group.  (Maybe because they are based in MN?!) [Mebane Faber] Related; The Russell 2000 (INDEXRUSSELL:RUT) has returned 33.95% year to date as of November 22, 2013, outperforming the S&P 500 (INDEXSP:.INX), which has returned 28.99% in the same period. According to Goldman Sachs Group Inc (NYSE:GS)’s David Kostin, the 4.96% outperformance of small caps over large caps has been driven by improvement in the U.S. economy. [ValueWalk]

A recent question was as follows: “…applied works most often exclude Financials and Utilities in their universe under study. You exclude similar constituents in your “valuation horse race” study. Why? Might the inclusion of these sectors materially impact the conclusions?” [Wesley R. Gray, Turnkey Analyst]

Can You Outperform the Market? It’s Expensive to Find Out

In the years when you are figuring out whether you are the next Warren Buffett, you will almost certainly pay more in fees and commissions than those investors who own straightforward index funds, and in performance terms, you will start behind by at least that amount. [Lars Kroijer, CFA Institute]

I was at Grant’s Interest Rate Observer a couple years ago listening to the end of the world. And now Hugh is tapping out: “I cannot look at myself in the mirror; everything I have believed in I have had to reject. This environment only makes sense through the prism of trends.” [Wesley R. Gray, Turnkey Analyst]

Perhaps no shareholders are cheering The Men’s Wearhouse, Inc. (NYSE:MW)’s offer for Jos. A. Bank Clothiers Inc (NASDAQ:JOSB) harder than Eminence Capital. The hedge fund has been a noisy voice pushing for a deal during the ping pong courtship between the men’s suit companies. [Maureen Farrell, Money Beat]

Meanwhile, the pair write that Eldorado Gold Corp (USA) (NYSE:EGO) and New Gold Inc. (USA) (NYSEMKT:NGD) (TSE:NGD) would likely need to defer capital-spending plans if gold traders’ visit to $1,200 is a long one. Agnico Eagle Mines Ltd (USA) (NYSE:AEM), too, “would need to consider further cost reductions or a potential trim to its dividend to avoid drawing down on its credit facility.” [Brendan Conway, Focus On Funds] 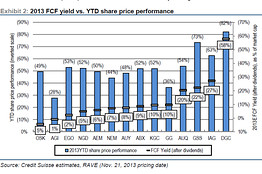 What Is Goldman Sachs Doing With Venezuela’s Gold?

What Stock Prices Have Gotten Stupid?

I wanted to point you to a quick chart from Ethan Harris and his global research team at Bank of America Merrill Lynch. It addresses something I have referenced before — the idea that so many folks could be accurately spotting a bubble in real time with any degree of accuracy. [Barry Ritholtz, The Big Picture] 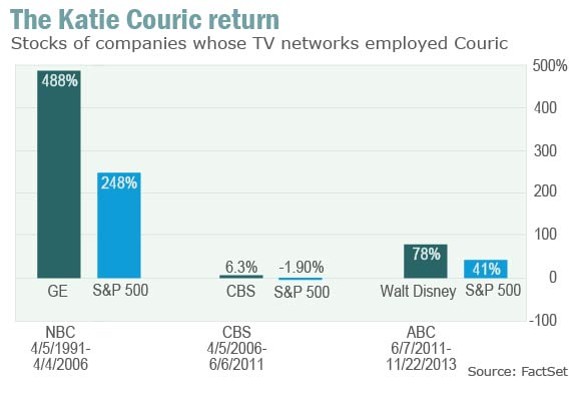 The Rebellion Year for Accounting Frauds in Asia?

This is the first time that a court has ruled to hold big accounting firms such as Samil-PwC responsible for poor auditing, whether in Korea or in Asia. Like Ziwo, the fraudulent accounts of Korea’s Forhuman are detected via their affiliate business partners in Japan. [Koon Boon Kee, BeyondProxy]

Cramer’s Response to Me – What He Really Says He Said

Perhaps I misspoke. Or perhaps Herb Greenberg misheard me. But I have never in my life believed you should “forget the fundamentals” when it comes to Herbalife Ltd. (NYSE:HLF) or Green Mountain Coffee Roasters Inc. (NASDAQ:GMCR). [Herb Greenberg, Herb on The Street]

That’s what appears to be happening to Nuance Communications Inc. (NASDAQ:NUAN), the voice-recognition company and one of the the longest-running of all rollups.  Perhaps most notable was mobile, which is believed to be the voice recognition power behind Apple Inc. (NASDAQ:AAPL) Siri. Mobile’s organic growth plunged by 24%. [Herb Greenberg, Herb on The Street]

Today the SEC announced a settlement with Curt Kramer, a penny stock promoter, and his companies Mazuma Corporation and affiliates. Kramer and Mazuma bought penny stocks in private transactions, and then re-sold them to public investors in unregistered transactions, which is a no-no, albeit a boring no-no. [Matt Levine, Bloomberg]

A Pregnant Woman Hit Her Stomach With A Hammer

It’s like a bad Chuck Norris joke come to life, but a 24-year-old mother in England was filmed hitting her pregnant belly with a hammer to prove that her unborn son was “hard.” [Alison Stevenson, Vice]