QE Fueled Market Mania
It was another crazy day of speculation in the gasoline and oil markets, typical of the QE fueled shenanigans that happen every day for the last month in equities and oil.  Speculators ran WTI up to $109 a barrel, and the RBOB contract up as high as $3.16 a gallon on Friday. So expect prices at the pump to continue to rise due to wild, rampant speculation in the futures market. 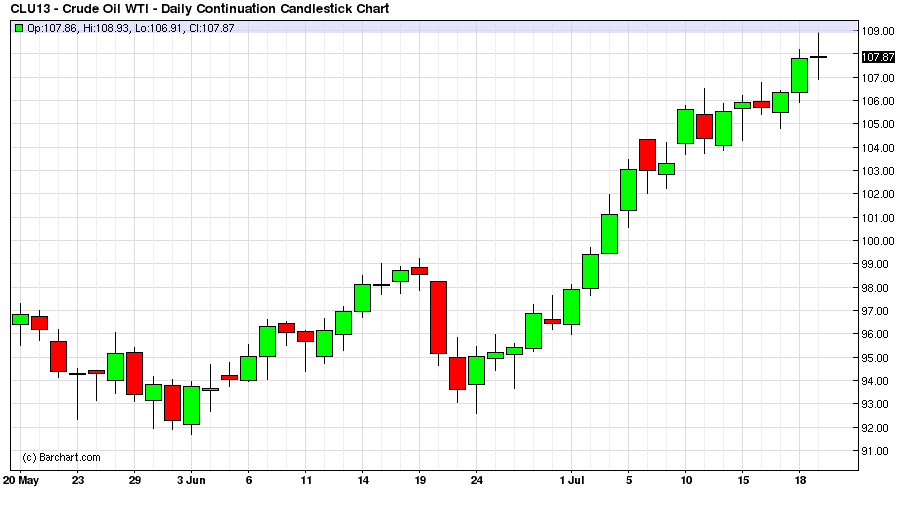 Unfortunately, the wealthy futures traders can afford these higher prices, but the middle class portion of the population really gets hurt by a 50 cent per gallon price increase at the pump. Think in terms of college students working to juggle rising tuition costs, with already tight budgets, and now they have to use credit cards to pay for their increasing gas bills each week because their low paying job doesn`t completely account for $4 a gallon gas fill-ups each week.Reading: Gasoline Supplies Highest for July Period Since 1992 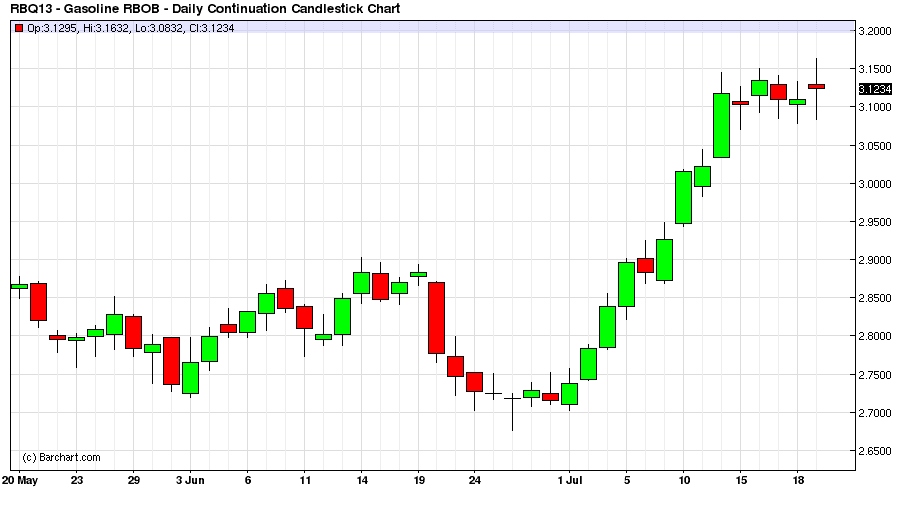 The Wal-Mart Economy
Think in terms of the average Wal-Mart shopper who barely makes it through the month on a strict budget, and is as price sensitive as any consumer in the country. This is why they are shopping at Wal-Mart because every single percent savings goes a long way in meeting their basic needs and having some semblance of a high quality of life given their limited resources.
Long-haul Truckers
Think in terms of a long haul trucker, who is independent and even though there are fuel subsidies, ask any trucker, and they will tell you that for the most part these fuel-surcharges are inadequate to mitigate against these types of rise in fuel costs. There are times where fuel prices are too high with these types of increases that certain trucking runs are unprofitable. They simply cannot take certain loads. Even at times they take losses on routes, to keep the business, and hope that prices will drop in the future. But these price increases in fuel categorically negatively affect their profitability, and thus livelihood.

Reading: 1% Growth: QE Policy a Failure, Time for A Change 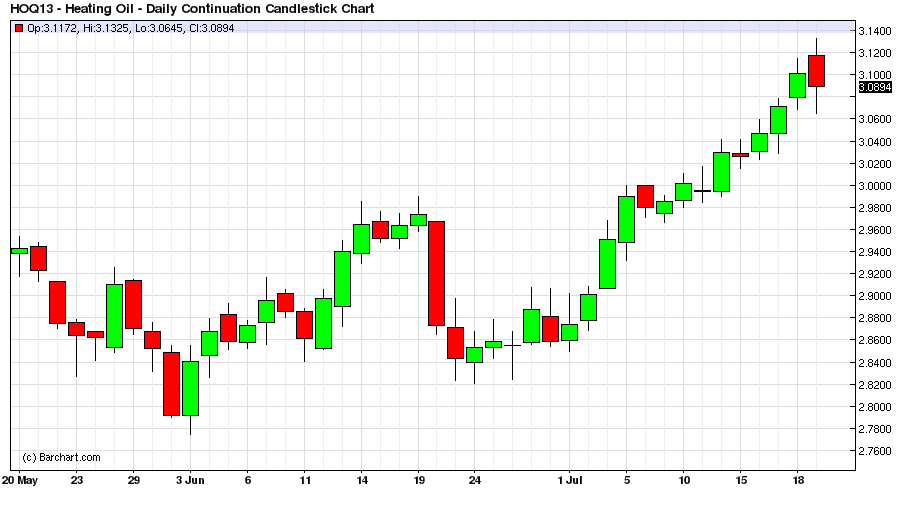 Everybody but “Middle Class” gets a Subsidy

In this country we bail out banks, we give subsidies to the large oil companies, we give subsidies to large corporate farming conglomerates, and we give energy subsidies for alternative energy business development like wind and solar projects. So we seem to subsidize a lot of big business in this country with low effective tax rates, offshore loopholes, and low minimum wage requirements.
Reading: 1% Growth: QE Policy a Failure, Time for A Change

There is a reason ZIP Codes Required at Gas Stations
But how are these same minimum wagers supposed to pay for gasoline each month without their own form of bailout? This is part of the problem, and why when you go to pay for gasoline at the pump, the machine asks for modern security features like a ZIP code, because gasoline has become more expensive in this country than many people can afford to pay in low income groups.
Accordingly this resulted in maxing out credit cards, and stealing credit cards to pay for gasoline purchases. You could track the modern era of energy trading directly with increased security features at the pump. Gasoline is just too expensive relative to the middle class`s income when factored on a percentage basis into a monthly budget.
Reading: Gasoline Futures Market Rises 45 Cents in 10 Days

How High until You ‘Feel’ Average American`s pain at the Pump Mr. President
Thus how about a bailout for the working poor, the middle-class, and all the retired people on fixed incomes Mr. President? Why not a bailout for main street Americans? How high do prices at the pump have to go before this issue gets your attention?
Speculators react to Incentives, the Fed Incentivizes Speculation
Without intervention as we have seen in the past the speculators will push any market as far as they can, and when you have one form of governmental market intervention in the Federal Reserve providing all types of cheap liquidity from low interest rates, $85 Billion in stimulus each month the speculators are encouraged and even need places to invest this money. Again another bailout for people who are the least in need of a bailout is the big banks and the Speculators who caused the entire financial crisis in the first place!
Democratic Constituency
So how about helping a large portion of the people who actually voted for your two terms in office? Is it that you have no more elections to run, that you have turned your back on the middle class in this country? Mr. President, Do you care about high gas prices anymore, or have you sold out to the corporate interests?
Obama was going to Protect America from the Evil Speculators
Wasn`t the middle class, and protecting main street’s interests from the Greedy, Corrupt, Evil, Too-Big-to-Fail Banks a large part of your political platform when you were elected eight years ago? You have utilized the SPR card twice to curb the speculators, and it worked both times like a charm. Give main street America a break with a bailout for their pocketbooks for a change, and release the Strategic Petroleum Reserves.
What is different now? Election, Election, Election
To quote directly from the last time Obama released the SPRs: “The overriding purpose of our effort is to increase supply to counter any shortfall and meet this typical increase in oil demand over the summer.  We are heading into a period in which demand for oil tends to be at its highest,” a senior administration official explained.” How is this summer any different Mr. President? Or now that you do not have any more elections to win, you don`t give a damn about the middle-class, the elderly, and main street America?
Leadership, Leadership, Leadership – O Brother, Where Art Thou?
I guess you’re just the typical limousine liberal who invites Billionaire Tech Titans to have dinner in Washington; the ‘beautiful people’ while the rest of main street America struggles to pay gasoline prices that they cannot afford, when a little presidential leadership on your behalf could improve their situation substantially. I reiterate Mr. President, we bail everybody else out in this country, why not middle-class Americans via an SPR Release to counter high prices at the pump?