On Wednesday, Apple Inc. (NASDAQ:AAPL) will release its new iPhone, the iPhone 5. For consumers it’s perceived as the latest and greatest from the giant, but for the economy, it may give it a much-needed boost.

JPMorgan Chase & Co. (NYSE:JPM)’s economist Michael Feroli did the math in a research report released on Monday titled, “Can one little phone impact GDP?” and wrote that the sales from the iPhone 5 could give a $3.2 billion injection (0.5 percentage points) to the economy in the fourth quarter.

How did he determine the figure? It seems fairly straightforward.

Feroli, with his equity analyst team, estimates that in the fourth quarter, about 8 million iPhones by Apple Inc. (NASDAQ:AAPL) will be sold in the U.S. This will come as sales of the earlier generation of iPhones are maintained. With its $600 price tag (representing the phone not the retail price and its substracted subsidy provided by the wireless company) plus its $200 from imported goods per phone, iPhone 5 sales could increase the fourth quarter GDP by $3.2 billion.

This equates to $12.8 billion at an annual rate or a 0.33-percentage-point boost to GDP. As noted by Brad Plumer of The Washington Post, this comes as JPMorgan Chase & Co. (NYSE:JPM) has forecast a 2% growth rate for all of the entire U.S. economy.

Really, could sales of a phone boost the economy?

So far, iPhone sales have been off the charts. 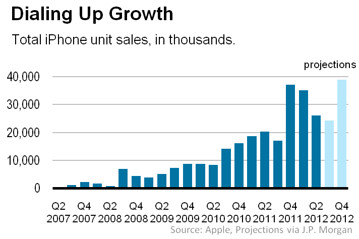 Feroli agrees it seems lofty and writes, “This estimate seems fairly large and for that reason should be treated skeptically.”

He looks back to last year’s release of the iPhone 4s and estimated that its sales increased last year’s fourth quarter growth by 0.1 to 0.2 percent. Look for the iPhone 5 release to be even stronger.

Feroli said via MarketWatch, “In October of last year, when the iPhone 4s first became widely available, overall retail sales that month significantly outperformed expectations. Essentially all iPhone sales occur either on-line or in retail stores. Over half of the 0.8% increase in core retail sales last October occurred in two categories: on-line sales and computer and software sales, which combined had their largest monthly increase on record. The incremental growth of Q4 sales at those stores over Q3, if due to the iPhone, would have added between 0.1% to 0.2%-point to Q4 growth, after subtracting the import drag. Given the iPhone 5 launch is expected to be much larger, we think the estimate mentioned in the first paragraph is reasonable.”

While Feroli sees iPhone sales on the rise, forecasts have been lowered for economic growth recently thanks to a number of factors: the looming potential for the fiscal cliff, increasing oil prices and the drought pushing down the U.S. economy.

According to the Wall Street Journal’s Sudeep Reedy, last week the forecasting firm Macroeconomic Advisers cut its third quarter forecasts for GDP growth to 1.5% and the fourth quarter to 1.4%; this represents seven-tenths of a percentage point decline for both thanks to the drought’s effect on farm output. But with a drought rebound, the seven-tenths of a percentage point will be added back to GDP growth in 2013’s first half.

For months, market watchers have wondered when the stock for Apple Inc. (NASDAQ:AAPL) will hit $900 or higher. If the new phone can save the economy, will it also push the stock to new heights?