ValueWalk
Home Technology The Retirement Risk Evaluator: Part II- The Effect of Valuations on the...

The graphic below shows the default results for the new retirement calculator (the results that appear before the user enters his own inputs):

The safe withdrawal rate is defined as the withdrawal rate that stands a 95 percent chance of working out, presuming that stocks perform in the future at least somewhat as they always have in the past (the effect of valuations on long-term returns was determined through use of a regression analysis of the historical stock-return data). At the lowest valuation level examined, the Retirement Risk Evaluator identifies this number as 9 percent. At the highest valuation level, it identifies this number as 2 percent. At the fair-valuation P/E10 level, the number is 5.4 percent.

Valuations matter. It is not possible to identify the safe withdrawal rate accurately without taking the valuations factor into account. Please review my Google Knol entitled “The First Retirement Calculator to Get the Numbers Right” for more background on and argumentation of this point.

The conventional wisdom is that going with a high stock allocation increases portfolio risk for retirees. It’s not necessarily so! The graphic below compares the safe withdrawal rates that apply at a P/E10 level of 8 (we may be seeing this P/E10 level again in the not too distant future) for retirees going with stock allocations of 20 percent, 40 percent, 60 percent and 80 percent. 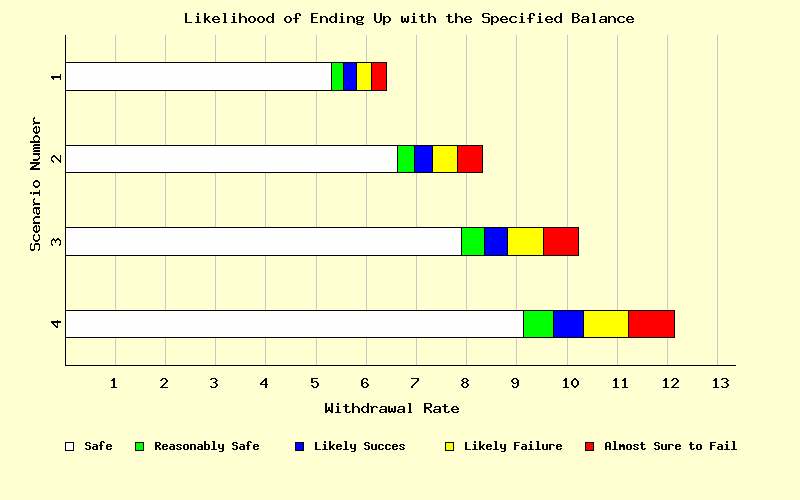 At this low valuation level, the safe withdrawal rate increases with each upward move in the investor’s stock allocation, moving from 5.3 to 6.6 to 7.9 to 9.1. Investors who avoid stocks when stocks are selling for one-half of their fair value greatly diminish the safety of their retirement plans by doing so. It’s not too hard to understand why. At those prices, the odds of further price drops are small indeed. The Reversion to the Mean phenomenon is like a powerful magnet pulling valuations upward when the P/E10 level is 8. And the return on stocks is about 6 percent real even in years in which valuations remain stable. That’s a plenty high enough return to make for a very safe retirement!

That said, the conventional wisdom applies in spades when valuations are high. The graphic below compares safe withdrawal rates for different stock allocation percentages at the P/E10 level of 26 that applied for most of the time-period from 1996 through 2008: 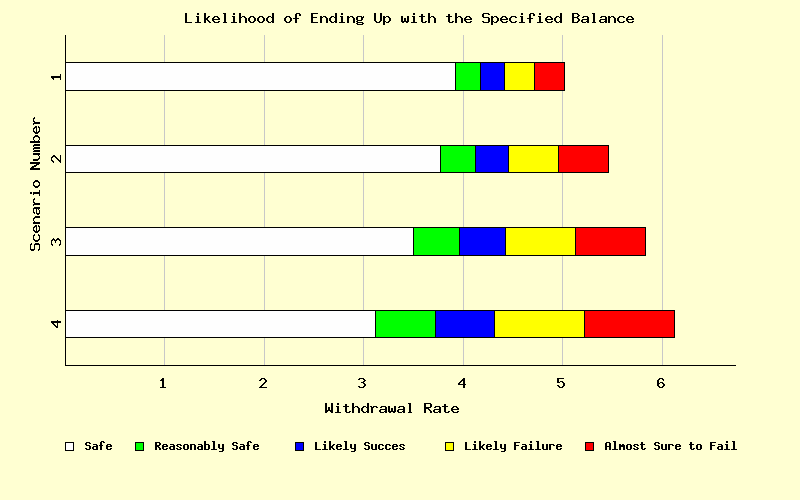 At this valuation level, the safe withdrawal rate drops with increases in the stock allocation, moving from a high of 3.9 at a 20 percent stock allocation to a low of 3.1 at an 80 percent stock allocation. While this result is in accord with the conventional idea that adding stocks to a portfolio increases the risk associated with the portfolio, it does not offer support for the conventional explanation of why this is so. The conventional idea is that stocks are more risky because they provide higher returns (the theory is that investors are being compensated for being willing to take on added risk). The data shows the safe withdrawal rate dropping as the stock allocation goes higher (in cases in which the valuation level is high) because returns being generated are poor! Investors are not rewarded for taking on the added risk that comes with investing heavily in stocks at times of high valuations, according to the Risk Evaluator. They are penalized! We need to begin examining the concept of an Equity Risk Penalty.

Rob Bennett is the owner of the www.PassionSaving.com site. He recently authored a Google Knol entitled “The Bull Market Caused the Economic Crisis.”