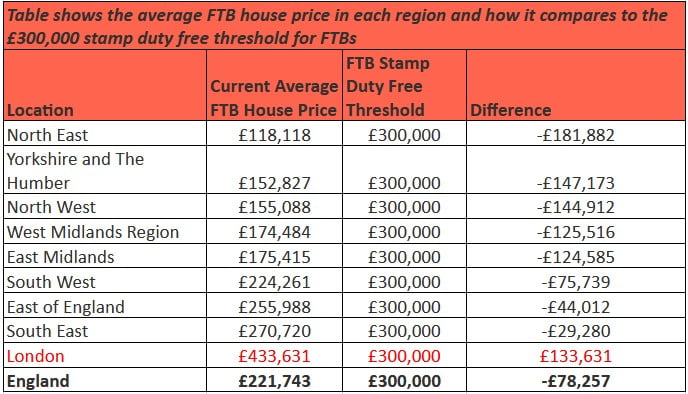 Research by Ascend Properties has highlighted just how much of the property market will remain stamp duty free for first-time buyers, even after the current holiday extension has expired.

While all residential transactions are currently enjoying no stamp duty owed on purchases as high as £500,000, this perk will remain in place for FTBs purchasing up to £300,000 beyond the final September cut off.

Ascend Properties analysed current average house prices for FTBs across England and found that, as a result, a very considerable proportion of the market will remain stamp duty free even once the deadline has expired.

At a regional level, there is just one area of the market where FTBs will wave goodbye to a stamp duty free purchase when the current holiday deadline is done. That is, of course, London, where the average FTB currently pays £433,631 to get on the ladder. However, they will still benefit from a reduced level of tax on purchases up to the £500,000 mark.

When analysing the market at local authority level, the research by Ascend also shows that there is little need to stamp duty deadline panic for those taking their first step onto the property ladder.

79% of all local authorities in England are home to an average FTB house price that sits below the stamp duty free threshold of £300,000.

Again, the North offers some of the greatest overall affordability with FTBs in Burnley (£90,048), Hartlepool (£90,882) and County Durham (£97,388) paying the lowest price when buying their first home.

“An air of panic has hung over the market of late, as long delays during the transaction process have caused many buyers to worry that they might miss out on the stamp duty holiday incentive.

This panic has been heightened with talks of a market cliff edge awaiting us once the clock does expire, despite the Government’s attempts to wean the market back to normality with a staggered deadline.

The good news is, that this stamp duty FOMO need not worry the vast majority of first-time buyers, as they will continue to pay no tax regardless. With the additional carrots of a refreshed Help to Buy scheme and the return of 95% mortgage products, not to mention the fact interest rates remain incredibly low, there’s arguably never been a better time to get a foot on the ladder.

So our advice to those first-time buyers being deterred by current market horror stories is to keep calm and get buying.” 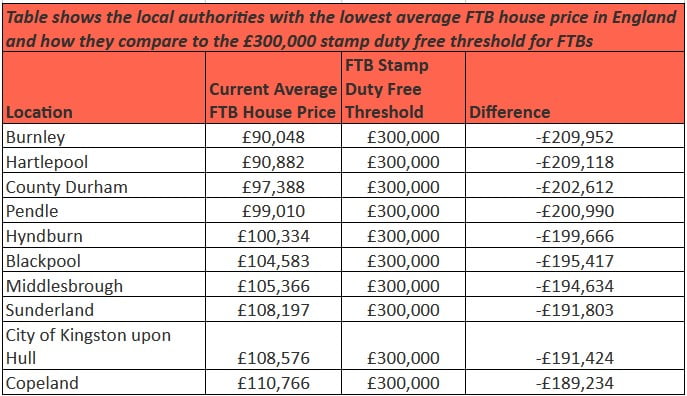