The Congressional Budget Office (CBO) just reported that the U.S. budget deficit is widening in a ‘big way’.

I wrote last January about the soaring cost of interest that the U.S. Treasury’s paying on its outstanding debts (you can skim that here). And it looks like things keep getting out of control – especially as the Federal Reserve continues raising rates (which further increases borrowing costs).

Besides this very expensive ‘interest’ problem – the CBO reported that the U.S. budget deficit widened to its fifth highest ever.

And as Trump’s tax cuts continue taking away from Federal revenue, while government spending – including interest payments – keeps growing, we need to ask ourselves some important questions. . .

The next time the U.S. slides into a recession – will they be able to continue borrowing such enormous amounts while maintaining their interest payments? Will they follow the same route that the Emerging Markets are headed today?

We see many talking heads on CNBC and other mainstream financial media tell us that there’s virtually no risk of the U.S. defaulting. Same thing with any other major country.

Even worse, there’s a growing point of view preaching to the masses that aslong as country has a central bank, they can issue all the debt they need without risk of default.

Why would anybody think that?

Because – for instance – if the U.S. didn’t have enough cash flow (tax revenue) to pay creditors (buyers of U.S. bonds). And if they weren’t able to borrow anymore to roll over debt – the Fed would simply print U.S. dollars instead.

The Fed then will transfer the printed money to the Treasury – and they will use that to pay back their debts.

So, looking at it this way – no country with a sovereign currency and central bank could default since they can always print money to pay their creditors.

The problem – for starters – is it doesn’t hold up historically. . .

David Beer at the Bank of Canada shows us that between 1960 to 2016, there have been 27 countries that have had local currency defaults. 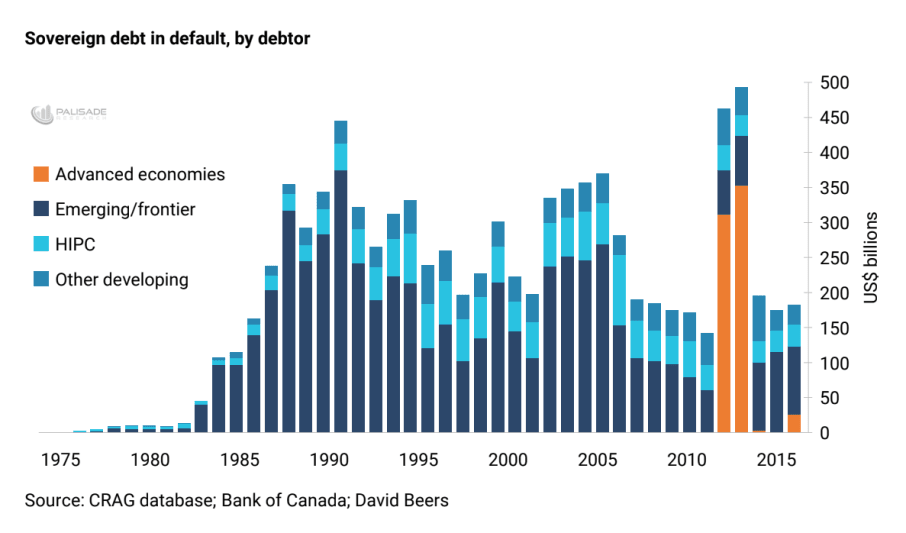 As David Beer’s writes: “A long-held view by some investors is that governments rarely default on local or domestic currency sovereign debt. After all, they say, governments can service these obligations by printing money, which in turn can reduce the real burden of debt through inflation and dramatically so in cases like Germany in the 1923 and Yugoslavia in 1993-94. Of course, it’s true that high inflation can be a form of de facto default on local currency debt. Still, contractual defaults and restructurings occur and are more common than is often supposed.”

Hundreds of Billions of investor capital is lost when these nations default. And the trickle-down effects of this greatly damage the economy.

Today we see many fragile Emerging Markets – like Argentina and Turkey and Ukraine – nearing default. And their answer has been to print money.

But even if the central bank begins monetizing their debts – a fancy way of saying printing money to pay for borrowing – it will cause serious inflation (which is currently plaguing those countries).

As David Beers wrote – this type of printing-to-repay is a form of de’ facto default.

Once the creditors get the printed money back, it will be worth much less – if not completely worthless.

And – again – historically this has happened much more often than the mainstream lets on.

Daniel Lacalle – PhD economist and author – wrote via The Mises Institute (the top Austrian Economic hub) that there’s been 152 currencies that have failed because of inflation.

This is important to review. Not because I think the U.S. is headed for a default anytime soon. But at what point does the camel’s back break?

We’re already watching the Emerging Markets near default – and it will eventually spill over onto the Developed Markets shores.

I’ve written about the physics term ‘Critical Mass’ – also known as a ‘Tipping Point’ – for those that remember.

An example I use is the Chinese bamboo tree. . .

Once you plant the bamboo seeds, nothing will sprout for the first five years. Most will forget it’s even there. Then suddenly – at the beginning of the sixth year – a small sprout will pop out of the ground. And within just the next five-to-six weeks, that sprout will grow over 90 feet in height.

This type of time asymmetry (slow build up – fast finish) is an example of ‘Critical Mass’. . .

Now think of this concept in terms of companies – remember Long Term Capital management (LTCM)? What about Lehman Brothers Bank? Even most recently Toys R’ Us?

They all had slow build ups where everything was fine for years – even many decades. They were able to borrow and roll-over existing debts. Until suddenly – within a short period of time – they couldn’t and quickly imploded

The point I’m stressing here is that when a nation does default, it happens after a very slow build up – and then falls apart fast – especially when many don’t expect it.

After reading the new book by Ray Dalio – head of Bridgewater Capital – I’ve become further convinced at how unsustainable things are. The over indulgence of debt during the low interest rate years post-2008 is now becoming dangerous. Especially as the Central Banks – led by the Fed – continue to raise rates and tighten.

This book by Dalio is a blueprint for debt crises throughout modern history – and well worth the read (it’s free – link here) for anyone thinking ‘but this time will be different’.