1) I've long been a fan of Nicholas Sleep and Qais Zakaria, who ran a below-the-radar-screen London-based hedge fund, the Nomad Investment Partnership, from September 2001 through the end of 2013.

They compounded at 18.4% after fees – making their original investors more than 10 times their money, versus 6.5% compounded (equal to barely a double) for the MSCI World Index over the same period.

Someone recently compiled a list of their partnership letters, which I read on my recent 13-hour flight to Kenya. I highly recommend them, especially the writings about Costco Wholesale (COST) and Amazon (AMZN).

Here are three articles in the Financial Times about Sleep and Zakaria:

You may not be familiar with the two names – they're not cannon investment figures like Charlie Munger, Joel Greenblatt, or Peter Lynch – but their track record is equally as good. During the 12 years the two ran Nomad, to 2013, the fund returned 921.1%, or 18.4% per annum after performance fees. Not bad, eh?

What's even more impressive, however, is the writing. After all, we should know more than anyone that generating eloquent prose on a subject like investing is harder than beating a benchmark (well, sometimes it feels like that anyway).

So take a dive into the letters, and what you'll find are several nuggets on the two managers' investing style, which seems to simultaneously straddle value, growth and special situations, depending on the market mood.

This article discusses Amazon: Cult figure of investing one of few to grasp early promise of Internet stocks. Excerpt:

One idea Mr. Sleep helped pioneer is what he dubbed "scale economics shared."

Typically, large companies use economies of scale to raise their own margins and generate greater profits in the short-term for their shareholders. Inspired by his analysis of the U.S. bulk-retailer Costco, Mr. Sleep observed that a vast competitive advantage could be achieved by Internet companies that opted instead to use their benefits of scale to reduce prices.

This "investment" in their own customers not only lowered prices but also meant that consumers ended up benefiting from these companies' ongoing expansion. The sacrificing of short-term profits would strengthen what he referred to as the "digital moats" of a new breed of Internet businesses.

And this one discusses Costco (it includes a link to this interview we did with Sleep about the company in my former newsletter, Value Investor Insight): Another lesson from cult fundie Nicholas Sleep. Excerpt:

Sleep was far ahead of his time in arguing that traditional Graham & Dodd-style value investing – where the basis for an investment starts with the price of a security relative to its earnings, free cash flow or net book value – missed optically "expensive" businesses that could compound at double digit rates over years, or even decades. As one investor admitted to FT Alphaville last week, it's difficult to get your head around the idea that declining margins aren't necessarily a sign of a company's weakening competitive position.

However, over 15 years later it seems even the most staunch value investors have caught up with Sleep's views. In 2019, Berkshire Hathaway purchased its first stake in Amazon, while Baupost Group's Seth Klarman added Facebook to his portfolio over 2020's first quarter. Even Ruane, Cunniff's famous Sequoia Fund formed to take on Buffett's investors when he liquidated his partnerships at the end of the '60s, owns stakes in Alphabet and Wayfair.

Yet it's also important to realize that Sleep's pitch was just as much about the fact the market hadn't priced in Costco's "perpetual growth" as much as it was about its customer-orientated business model. Indeed, in 2004, Costco was only trading at an earnings multiple under one turn higher than the S&P 500 – 23.9 times vs 23.1. Hardly cheap, but not extraordinarily expensive either.

Bill Ackman Has Had Another Blockbuster Year

2) Kudos to my long-time friend Bill Ackman of Pershing Square Capital Management, who has crushed the market for the second year in a row.

And, as this Barron's article notes, his publicly traded closed-end fund, Pershing Square Holdings (PSHZF), is still cheap... which is why it's the largest stock holding in my personal account: Bill Ackman Has Had Another Blockbuster Year. His Fund Is Still Cheap. Excerpt:

Bill Ackman is ending a second blockbuster year in a row, but investors still aren't won over, as Ackman's large overseas closed-end fund, Pershing Square Holdings continues to trade at a large discount to its net asset value.

That could mean an opportunity. The fund offers a play on both a concentrated equity investment portfolio, including stocks like Chipotle Mexican Grill (CMG), Lowe's (LOW), Starbucks (SBUX), and Hilton Worldwide Holdings (HLT), and Ackman's big special-purpose acquisition company, Pershing Square Tontine Holdings (PSTH), that appears to be on track find a target company in the first quarter.

The Exodus From New York And California

3) The pandemic is leading a lot of folks to move out of big cities and high-cost areas like New York and the Bay Area of California, as this Bloomberg article documents: COVID Is Accelerating the Exodus From New York and California to Cheaper States. Excerpt:

Elon Musk is doing it. Carl Icahn has already done it, so has Joe Rogan. And many who float in Manhattan's upper echelons want to do it.

As usual, my colleague Berna Barshay was early in covering this important trend, writing about it in her June 18 daily e-mail, Here's Why the Pandemic Might Ignite the Next Real Estate Boom. In it, she suggested online real estate company Zillow (Z) as a way to play the trend... Since then, the stock has more than doubled!

I asked her for her latest thoughts on this topic, and she replied in an e-mail:

I know a bunch of people in their 20s through 50s who are working from home and have left NYC for a year/the winter because it is easier to socialize outdoors in Florida, California, or Hawaii.

They plan to be back post-COVID, but I suspect some attrition will be permanent. The single ones are probably more likely to be back eventually because dating prospects are better in normal times in major cities, especially for those over age 35 or 40.

There has been a long-term migration trend toward warmer locales for a decade though. This isn't a new trend – it's just been accelerated in 2020 (like so many other things).

The only Northern city in the top 20 fastest-growing cities from 2010 to 2019 is Seattle-Tacoma-Bellevue. The gainers all have warm weather except for Seattle, Denver, and Salt Lake City, and are all lower-cost cities except for Seattle and maybe Atlanta (depending on whether that is considered high cost yet).

If you aren't receiving Berna's free daily e-mail, you're missing out! You can sign up for it here.

4) I was saddened to hear of the death of Zappos founder Tony Hsieh – and even more saddened to read of the circumstances: a descent into madness that his friends and family were unable to reverse, as these two stories document:

It reminds me of a similar experience I had with a young woman I've mentored for nearly three decades – also the child of Taiwanese immigrants. It turns out she was/is bipolar and that, combined with the pressure she put on herself, led to a very scary breakdown many years ago.

Thankfully, her family and I were able to intervene and get her help, and she's now doing well.

Tesla In The Masai Mara

We spent the past three days at the Mara Serena Safari Lodge, which switched a year ago to a solar power system. My parents just had a small one installed at their house (28 panels and 16 batteries, at a cost of $16,000), so my dad asked for a tour of the safari lodge's system and I tagged along.

Because of its remote location in the middle of the Masai Mara game reserve, the lodge has to generate all of its own power. Prior to a year ago, it was spending $20,000 to $22,000 every month running these three diesel generators 14 hours a day:

But then the parent company of the lodge struck a deal with a local solar power company named OFGEN to build and operate this 950-panel solar array:

Here's a picture of the solar array from the air, with the lodge on the left, as we were flying out this morning: 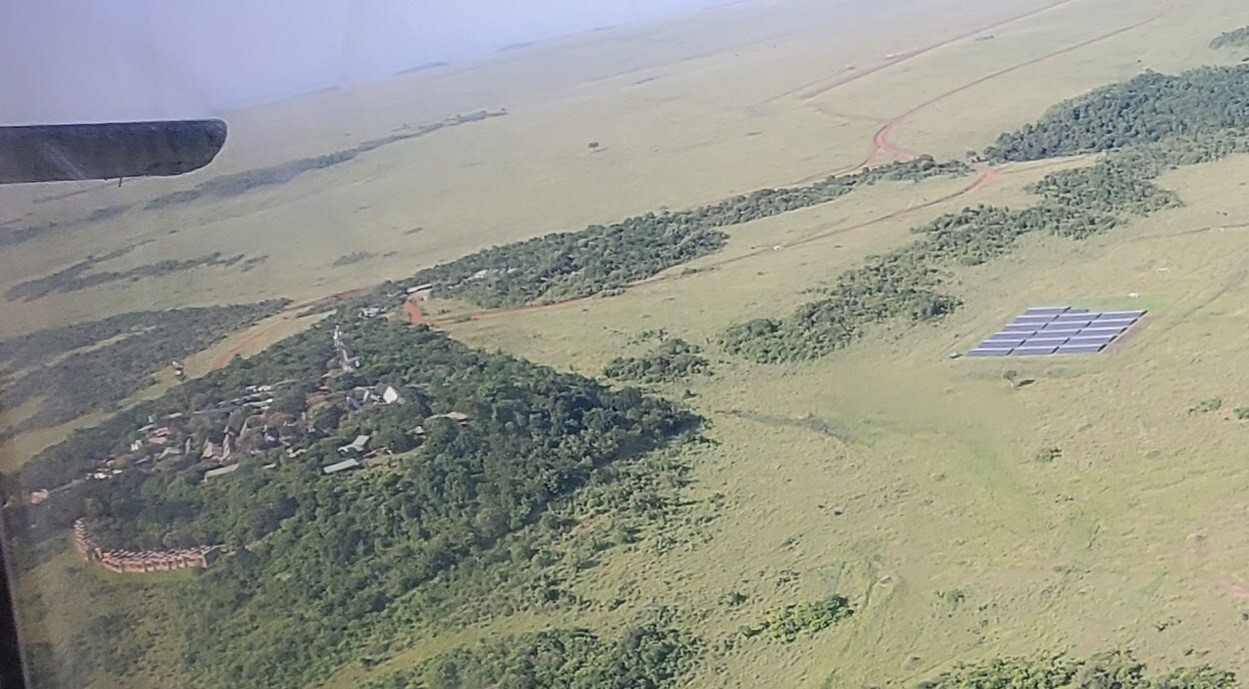 The power is then sent to a battery system located next to the lodge on the hill in the background of the picture above. It's run by – you guessed it – Tesla! Here's a picture of the Powerpack array of batteries:

This is part of Tesla's commercial division, which you can read about here.

According to the on-site manager of the solar power system, usage of the diesel generators (and the associated fuel cost – and pollution) has declined by 95%.

He also told me that the lodge doesn't own either the solar array or the batteries – instead, OFGEN and Tesla paid to install them and then charge the lodge based on its power consumption.

I'm sure OFGEN and Tesla have a much lower cost of capital than the lodge, so this is likely a good deal for all three of these companies – and the environment!