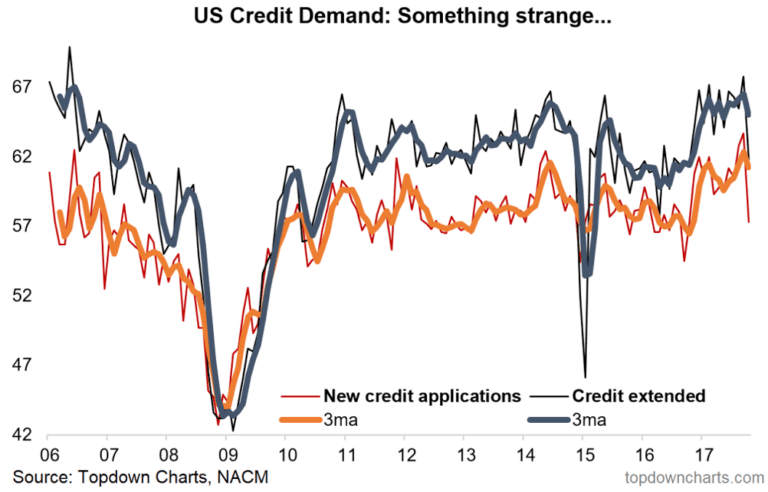 As I was going through and updating the various indicators that I monitor something in the credit space surprised me. The NACM CMI (think of this as the credit manager’s version of the ISM PMI), saw a major drop in a number of its key sub-indexes in the December report.

The chart comes from a wider discussion on the global macro outlook and the implications for the major asset classes in the latest Weekly Macro Themes report.
The chart in question shows two key sub-indexes we watch: "new credit applications" and "credit extended". In both respects there was an uncharacteristic and significant drop. 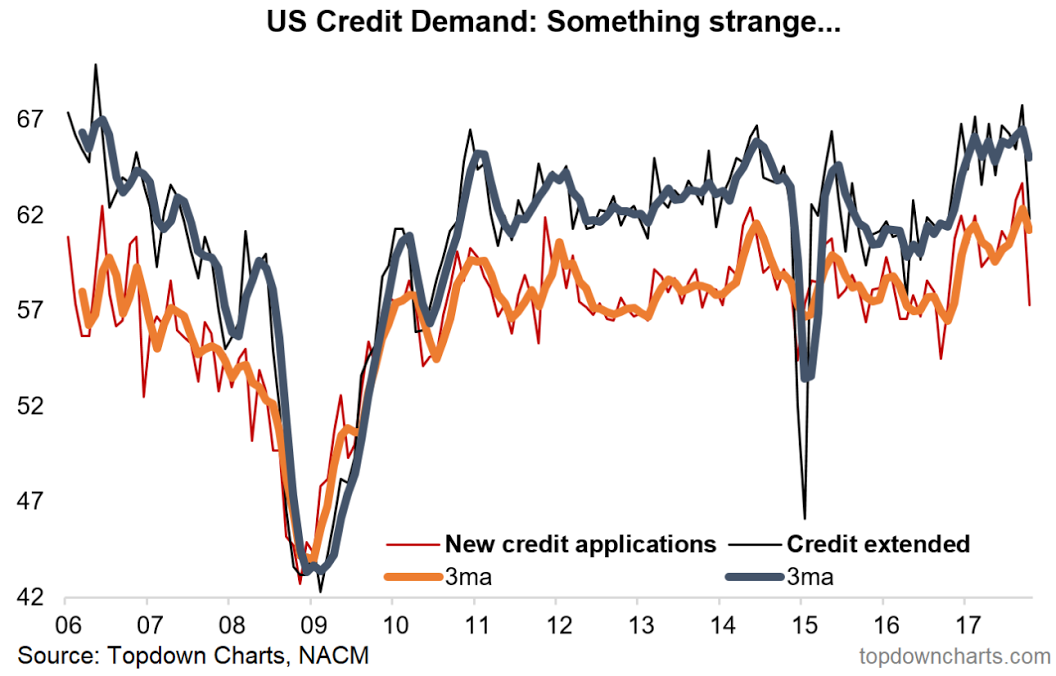 The reason I watch these two sub-indexes in particular is because it basically gives a guide on the demand for credit (credit applications) and supply of credit (credit extended). The surge in these indexes in Jan/Feb last year came as a number of indicators on the US and global economy were beginning to show promising signs of strength (and helped me raise conviction on my views at the time).
Thus when a reading like this shows up it makes you pay attention, because the first step in a downturn is that the data and indicators become "less good". It's also key because we use a couple of key pieces of data within the NACM CMI for informing investment strategy research on US High Yield Credit (obviously a deterioration in credit conditions is going to reflect badly on credit markets).
There is of course the possibility that this is simply an outlier or an exception (or even an error!), and the January reading (due out at the end of the month) could bounce back in force. I am currently leaning toward this conclusion because the headline CMI is tracking closely with the ISM PMIs and the latest move looks out of step with this.
Furthermore, looking at a variety of indicators the US economy still looks fairly healthy, and the global economy is on its strongest footing in years. But I will say this: if January shows no improvement, or worsens, or if I see other data confirming this strange drop I will be quick to change my view both in terms of the economic outlook and asset allocation positioning. Watch this space!
This article originally appeared as a submission at See It Market
For more and deeper insights on global economics and asset allocation, and some more good charts you may want to subscribe to the Weekly Macro Themes. Click through for free look or a trial.
Two Sigma’s Venn outlines factor performance for March