May 17, 2018 UPDATE: New information from the Korean outlet The Bell suggests that Samsung has finally nailed down the device of the Galaxy X – driving home the fact that the phone, indeed, is in development and may be coming sooner rather than later.

It’s no secret that Samsung has been working on foldable screens for quite a few years at this point, and it’s looking likely that the Korean tech giant may finally be ready to release the foldable phone to the world in 2019. 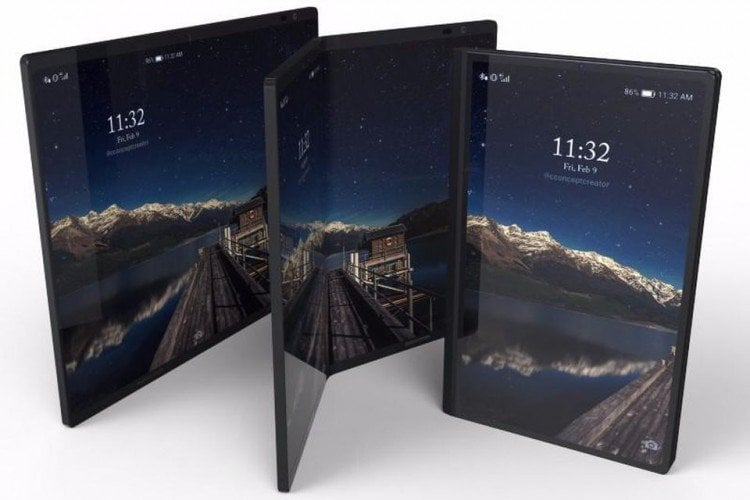 The device will be using OLED panels, as is expected from high-end Samsung flagships, but what is most notable is the number of them. Strangely enough, the Galaxy X will feature three 3.5-inch OLED panels: two that will combine to form a massive 7-inch screen when unfolded as well as one at the read of the device that allows the phone to be used while folded.

This may result in a foldable phone that is one of the smallest high-end flagships on the market while still retaining one of the biggest screens in history.

The screen will also feature a completely bezel-less front with an under-display fingerprint sensor. While Samsung has been criticized in recent years for a lack of innovation, the Galaxy X may very well be a demonstration that the company is still in the game when it comes to driving the industry forward.

We’ll have to see whether these design changes come to fruition, but after some uncertainty regarding the release of the Galaxy X it’s looking like development is preceding as planned with a potential 2019 release.

Dec 28, 2017 UPDATE: Could the existence of the fabled Galaxy X be in doubt? Probably not. But the release date of the foldable device may be significantly less certain.

A new leak indicates that the model number SM-G888N0, seemingly linked with the Galaxy X, is actually associated with a completely different device.

It seems that the Samsung SM-G888N0 is a LTE device built for professionals, meaning that not only is it not the Galaxy X, but it’s not really intended for the consumer market whatsoever.

Samsung may still fulfil its promise to release a Galaxy X foldable before the year is out, but this will undoubtedly be logistically challenging for the mega-corporation.

Dec 15, 2017 UPDATE – The foldable Samsung Galaxy X is one of the smartphone rumors of the year, and recently we gained an intriguing insight into the design of this device. However, this hasn’t been met with universal acclaim, with some observers suggesting that it is a little bulky, and even somewhat ugly.

A patent filing from Samsung has recently given an indication of how the Galaxy X may work when it is released, with two screens and a strip used to connect the two displays. When folded on top of one another, the strip between the two effectively protrudes in loop-like fashion.

The patent also suggest that Samsung intends to combine different generations of devices. The left display is very much reminiscent of recent releases, with slim bezels and no physical Home button.

However, the right screen features a more traditional smartphone design, with a physical button placed under the display, and camera and front-facing scanners visible.

This particular patent may not ultimately appear as part of the Galaxy X release, as massive corporations such as Samsung file such requests extremely frequently. There is also no doubt that the Korean corporation will be testing several different versions of the foldable technology, so it’s possible that the final device will look nothing like this.

But the fact that when folded the device in this patent appears thick and bulky has received criticism in some quarters. Certainly this design element doesn’t exactly fit in with the smartphone zeitgeist, and it could be something that the manufacturer tinkers with before releasing the Galaxy X.

Another patent released by Samsung indeed suggests that the bendable display of the Galaxy X may work in a completely different manner. This document describes a way of folding a display back on itself to create what is effectively a wraparound experience.

In this particular design, the screen notably does not flex. This could be another possible approach for the Galaxy X when the Korean company unveils its foldable smartphone.

While the existence of the Galaxy X is pretty much confirmed following explicit statements from the developer, the precise form of the device is far from settled. There has been considerable debate in the Samsung-following community regarding the final form of the Galaxy X, and the fact that Samsung is patenting differing technology will only heighten discussion.

Among the things that Samsung will be considering particularly carefully with the Galaxy X is the commercial viability of the product. On the one hand, the cost of manufacturing and ultimate price tag of the device will be a concern, and then, conversely, the precise consumer demand for this device is certainly not known currently.

It is this latter point which means that Samsung is expected to go with a limited release of the foldable Galaxy X initially, and probably in its native East Asia only.

Dec 6, 2017 UPDATE – A new report suggests that the Galaxy X foldable smartphone could indeed appear in 2018. This has already been suggested in some quarters, but the likelihood of this eventuality is certainly increasing.

It is well known that Samsung is working on some form of foldable smartphone, with rumors of such technology having been circulated for several years. Samsung itself also outlined its capabilities in this department at several trade shows, and it was thus expected that this prototype technology would make its way into the mainstream eventually.

And now a new report from Business Korea suggests that Samsung will release a device with a foldable screen as early as next year. This publication obviously emanates from Samsung’s native territory, meaning that its word can be taken particularly seriously.