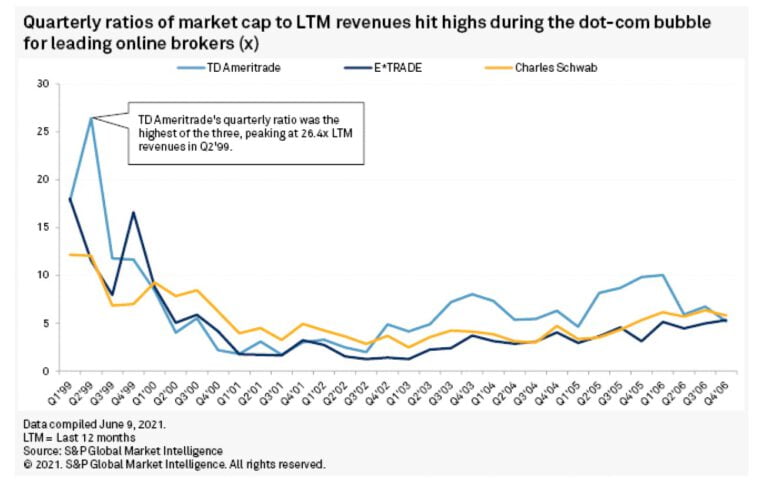 Now that the IPO prospectus for trading-app maker Robinhood Markets Inc. is out, suddenly a rumored $20 billion valuation does not seem out of the question. It might even be a conservative estimate. We think Robinhood will have a strong IPO showing and should be valued at upwards of $20 billion in market capitalization, if not $30 billion.

Its last private post-money valuation, in late January 2021, was $18.2 billion, according to S&P Global Market Intelligence. A market cap of $30 billion or more could make sense if one uses valuations from incumbents like TD Ameritrade Holding Corp., The Charles Schwab Corp. and E*TRADE Financial LLC at the time when they were growth stocks, with business plans looking to disrupt the traditional phone-based brokerage model through online trading. Based on their ratios of market cap-to-last-12-months revenues in the late 1990s, Robinhood could easily command a $20 billion valuation and, perhaps, even a $35 billion one, based on TD Ameritrade's second-quarter 1999 ratio of 26.4x and Robinhood's $1.35 billion in total net revenues in the four quarters ended March 31, 2021. Of course, those lofty valuations in the late 1990s also preceded the dot-com market crash. 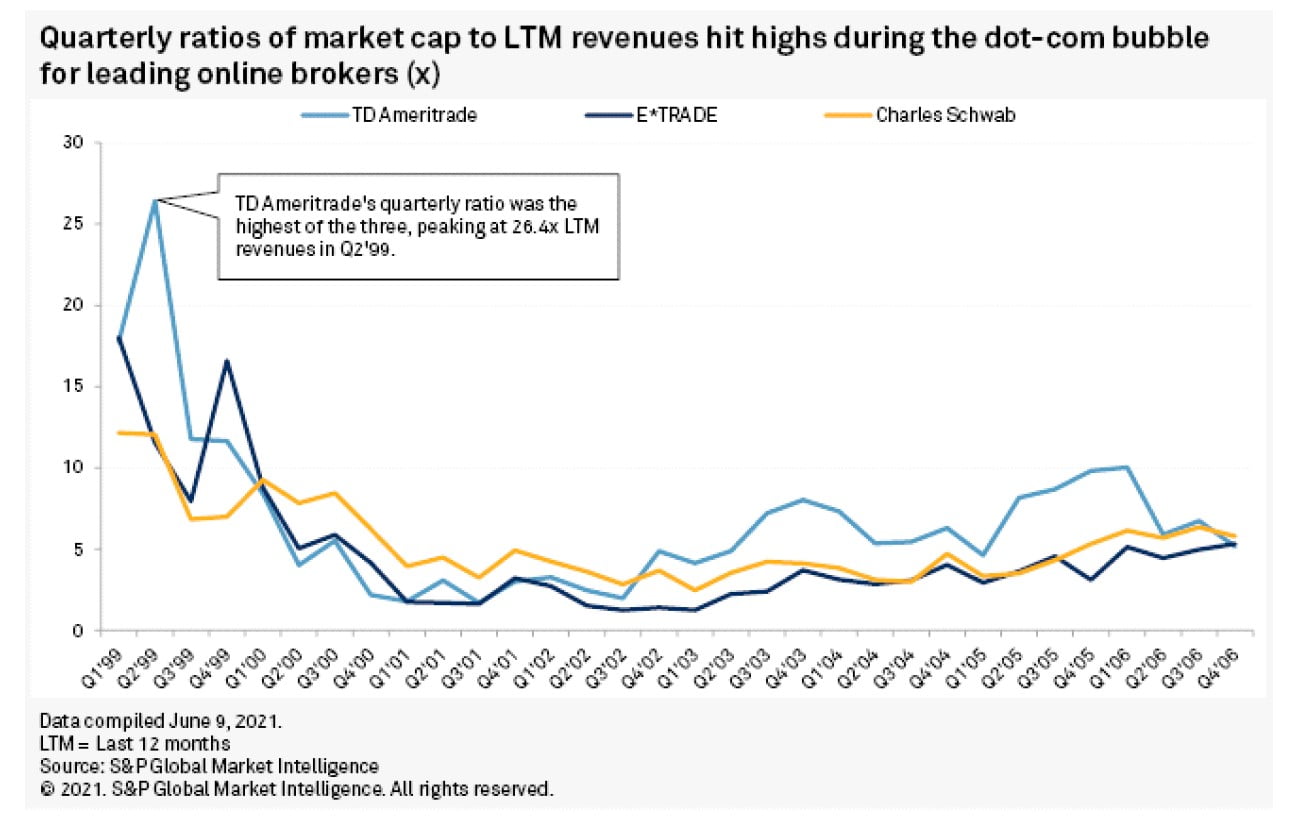 Robinhood's shares were reportedly being valued at $40 billion in the private secondary market, according to a Feb. 11 Quartz article citing Rainmaker Securities. That still seems on the high side, based on historical comparisons, but perhaps within the realm of possibility, given Robinhood's rapid growth in users and revenues. Robinhood reported 18 million funded accounts at the end of March 2021, up 44% from December 2020, and its total transaction-based revenues swelled 78% sequentially in the first quarter of 2021 to $420.4 million.

This should help reassure potential IPO investors, as it was unclear to what extent Robinhood might see a user exodus during the GameStop Corp. saga. At the time, Robinhood was forced to temporarily halt trading in so-called "meme wrote in a Feb. 2 report, based on Google search data, Reddit posts, and how much larger its clearing operation was in relation to Robinhood's.

Fidelity did indeed have a windfall, later disclosing that it picked up 1.6 million new retail accounts from users 35 years old or younger in the first quarter of 2021, up 222.8% year over year. But, as noted above, Robinhood still managed to boost its user count in the first quarter of 2021. Monthly active users grew 51.3% quarter over quarter and more than doubled year over year.

Robinhood is different from its incumbent competitors in a few key ways. One is the ability to trade cryptocurrency. This proved well timed for Robinhood, as Dogecoin suddenly became another source of speculation among young retail traders following the GameStop action. Robinhood makes money from crypto trades in a similar fashion to equity trades — routing order flow to intermediaries — and reported $87.6 million in transaction-based revenues from cryptocurrencies in the first quarter of 2021. That was up an astronomical 1,967% year over year.

Another point of difference is how reliant Robinhood is on payment for order flow. Its transaction-based revenues accounted for 81% of its total net revenues in the first quarter, though a more normalized figure is about 75%, based on the preceding quarters when there was not an explosion in meme stock activity. Still, 75% is much higher than Schwab, which made only 26% of its total net revenue in the first quarter of 2021 from trading revenues. Schwab's largest revenue source was net interest revenue, at 41%, whereas net interest revenues only accounted for 12% of Robinhood's first-quarter total.

One of the common sources of net interest revenue for online brokers comes from sweeping the uninvested cash in a user's account into an interest-bearing account. Robinhood partners with a series of banks to do this, including The Goldman Sachs Group Inc., Wells Fargo & Co. and Citigroup Inc.

Based on Schwab's monthly figures, retail trading activity appears to have settled down somewhat from the meme stock rally in late January and early February. But activity is still elevated relative to pre-pandemic levels, which bodes well for all online brokers and particularly ones like Robinhood that rely heavily on transaction-based revenue.

Robinhood bears a significant amount of headline and regulatory risk, given its missteps at times around disclosures and financial regulations, but it continues to have tremendous growth potential, in our view. It has yet to offer lucrative ancillary services like wealth management, as its incumbent competitors do. If it adds more revenue streams, it will be an even more formidable force to be reckoned with. 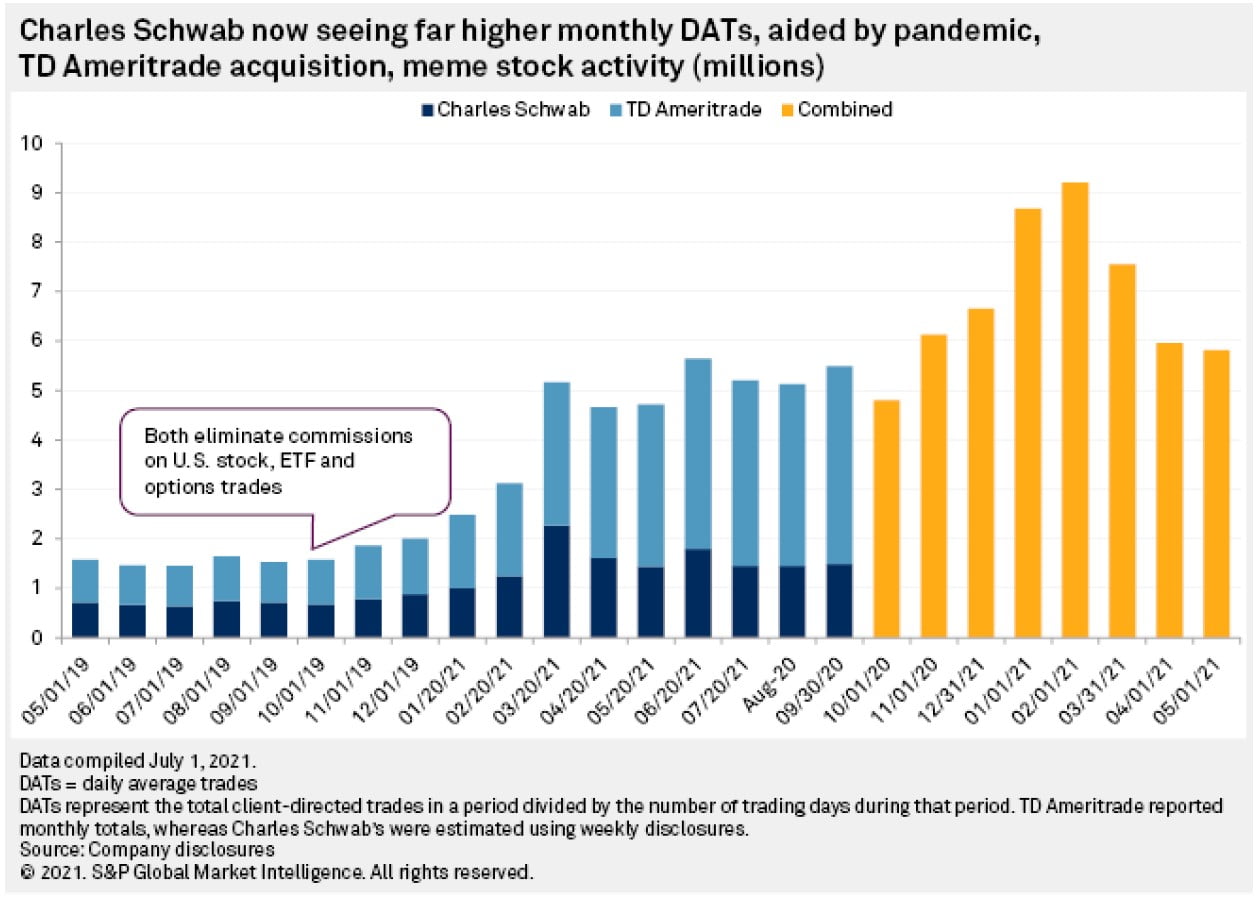